Joints Wrapped in Gold Are Now a Thing... Wait, What?

Are they safe? Why do they taste like that? 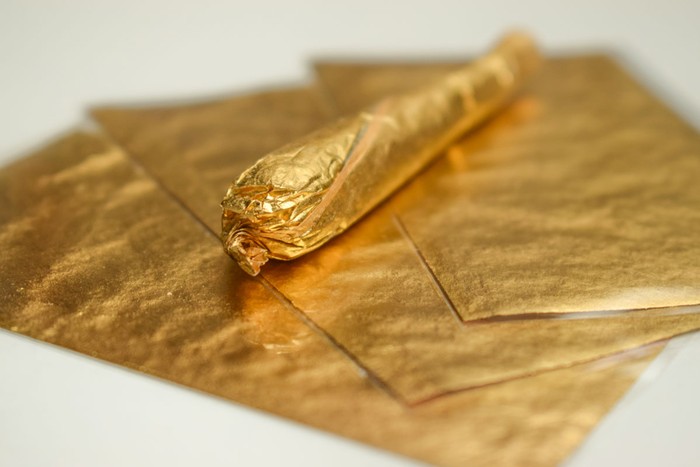 Are these rolling papers sheathed in metal safe to smoke? Jessica Stein

The other day, we got an e-mail from the creators of Shine, joint rolling papers coated in 24 karat gold. This is apparently a product you buy if setting fire to hundred dollar bills has become boring to you. The papers sell for $45 for a pack of six, meaning a single sheet of rolling paper costs $7.50.

After a publicist sent The Stranger a box of free Shine papers, I rolled a joint full of top-shelf Hindu Kush. "Is that real gold?" people would ask. When I explained that it was in fact a joint encased in a metallic sheath of 24-karat gold, they inevitably asked: "Is that safe to smoke?"

Shine's website doesn't offer much in the way of reassurance. They defend their product by saying, "There is no such thing as healthy smoking." Yikes.

Shine goes on to say that most of the joint's gold goes into your ashtray instead of your lungs. They also cite a 2011 study that forced rats to inhale tiny particles of gold six hours a day, five days a week, for 90 days. The rats in this study didn't get sick. The creators of Shine point to this as evidence of their product's safety.

Bruce Kelman, a toxicologist based in Redmond who was an author on that rat study, told me that gold probably doesn't make smoking joints more dangerous, but he still feels it was a "misuse of the study" to say that it demonstrates gold-wrapped joints are innocuous.

"The bottom line here is that compared to the THC and inhaling the combustion products, I don't think the gold really adds any additional significant risk," Kelman said. "But to claim that something is safe because of this one animal study just really misrepresents this science."

To be fair, Shine didn't claim their product was safe, just that it probably wasn't that harmful. If gold doesn't add any additional significant risk, does that mean Kelman himself would smoke it? No. "Frankly, knowing what I know as a toxicologist, I wouldn't inhale a combustion product regardless of whether there is gold in it or not," he said.

I thought deeply about Kelman's anti-smoking message while I smoked my way through a joint wrapped in gold that night. Two-thirds of the way through, I decided that smoking gold-wrapped joints was some dumb bullshit. If nothing else, wrapping pot in gold makes great weed taste terrible.

These gold joints turned the flavor of Platinum Alien OG (a strain that usually tastes like pine and lemon) into a chemical off-flavor. They turned Acapulco Gold (a strain internationally famous for its exquisite earthy and fruity flavor) into the forgettable taste of cardboard. As for that gold joint full of Puffin's Hindu Kush, I haven't even smoked it yet. I am considering unrolling it and putting the flower into a product that won't taste terrible.

Shine's rolling papers aren't about enjoying luxurious strains of cannabis or even getting high. They are all about the appearance of luxury. Rapper 2 Chainz called it "the caviar of joints." This product's conceptual birthplace is near the nexus of Instagram and the ultra wealthy.

Shine is essentially the Fyre Festival of joints: flashy and alluring from afar, but the more you learn, the less appealing it becomes.

When 2 Chainz reviewed the product, he said that it "was almost so fancy, you didn't want to smoke it." Which is more accurate than the trap rapper probably knew. Because while these papers certainly look fancy, you don't actually want to smoke them.