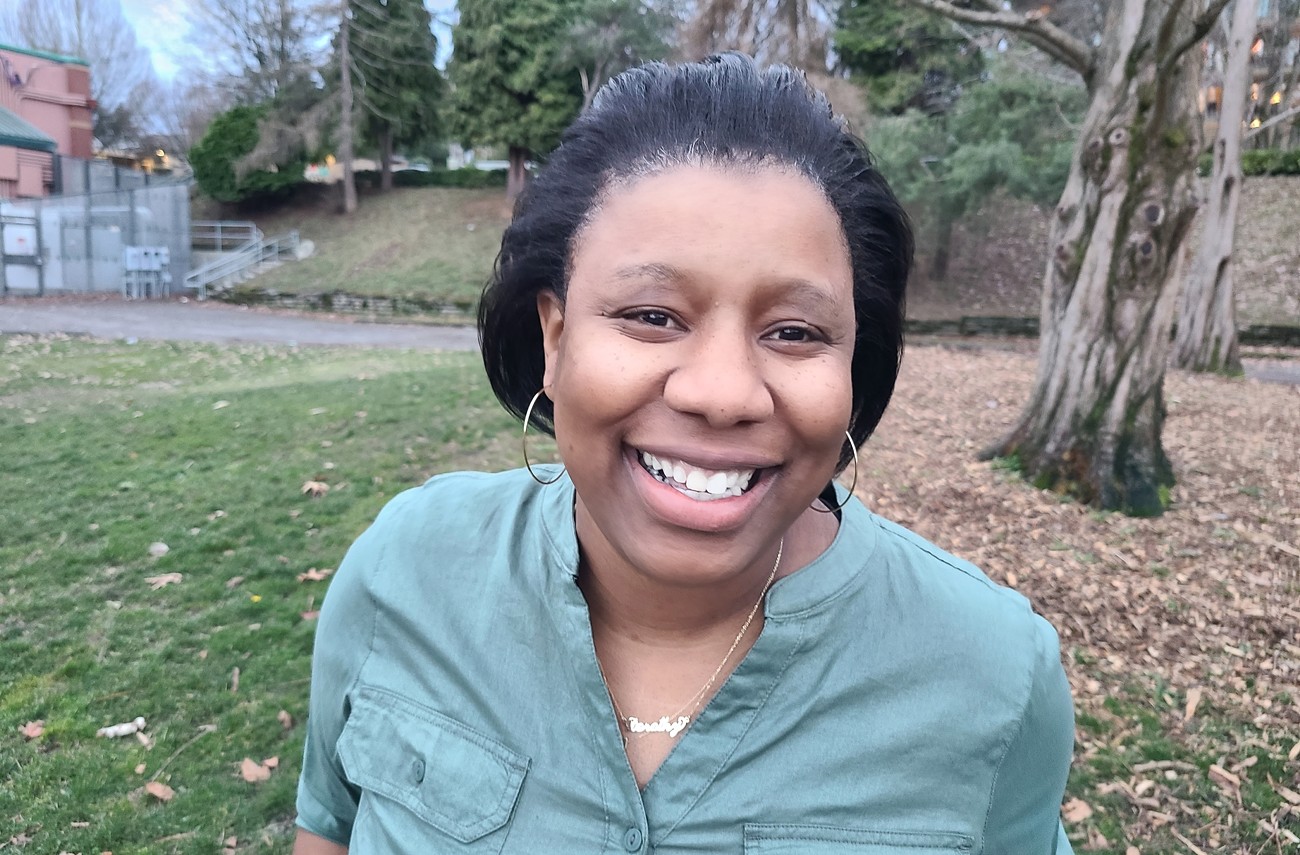 Hollingsworth wants to “rebuild trust” for the police department and find creative but “thoughtful” ways to increase density. Courtesy of the Campaign

In her MLK Day announcement, Hollingsworth said she wants to bring a missing Black and LGBTQ+ perspective to the council. Her platform focuses on investing in young people, nurturing small businesses, and improving food access.

As for the issues that will be front-of-mind for voters this year–public safety and the housing crisis–Hollingsworth wants to “rebuild trust” for the police department and find creative but “thoughtful” ways to increase density.

She told The Stranger that the death of her grandmother, civil rights leader Dorothy Hollingsworth, who passed away last summer, inspired her run.

That passing prompted a reevaluation of her advocacy in her neighborhood and her own future. After 38 years of watching public policy change the Central District, she now wants to help the City Council think more critically about how legislation affects communities by involving stakeholders from those communities in the process. Or, as Hollingsworth called it, “pairing a face with policy.”

“When you're creating policy, you want a policy so embedded that it doesn't have to be a policy anymore–it's just a way of life. And we just haven't figured that out yet,” Hollingsworth said.

Hollingsworth wants to apply her strategy of “pairing a face with policy” to public safety and policing. Acknowledging the history of racist policing and the murder of Geoge Floyd, she stressed the importance of working with communities to rebuild trust with police.

She didn’t have all the answers for how to rebuild that long-broken trust, which many politicians have promised to do before her. In a follow up email, she reminded The Stranger that she’s only one week into the campaign, but her first step would be to make sure the officers are serving communities they are part of. Toward that end, she wants the officers to know the business owners, community leaders, and other neighbors in the area. She said when she was a kid, they knew cops by name, not by their badge.

That line of thinking almost exactly chimes with SPD Chief Adrian Diaz’s current policies, including the community service officers program, “coffee with a cop,” and the new “behind the badge” program, which introduces new cops to the communities they’ll be policing.

Like Diaz, she also stressed the need to lower response times, arguing that a community can’t trust someone who doesn’t answer their calls.

This year, Council Member Sara Nelson, backed by the Mayor, fought to offer cops big bonuses to get more butts in patrol cars. With more cops, they argued, they could speed up response times. If hiring more cops did lead to faster responses, then Hollingsworth says she would vote to hire more of them. She did not directly say she supported luring them with bonuses but instead circled back to community engagement again: “I'm not saying I don't agree with the incentive, but I would love for us to re-engage in conversation with police and communities.”

She went on to emphasize that public safety was much more than policing–it also involves EMT responders, street outreach, and well-lit crosswalks. Echoing Mayor Bruce Harrell, she believes even just keeping neighborhoods clear of trash and graffiti contributes to community safety.

Some Seattleites call for alternative safety investments to come straight out of the police budget. When I asked Hollingsworth if the City should redistribute police funds to diversify public safety responses, she said investments don’t always have to come from just the government. The City should also ask the community, business, and nonprofits to pitch in, too.

In addition to policing, voters will also come to the ballot box with concerns about homelessness and housing. Hollingsworth said those two issues were “two separate things.”

To address homelessness, she wants to focus on finding and filling gaps in services for unhoused people. In her work at Northwest Harvest, she saw unhoused people slip through the cracks of the local food access network, so she said she and her team set up different access points–community centers, churches, schools, pantries, drive-thrus–to get food out to as many people as possible. In that spirit, she wants more “on-ramps” for unhoused people to access services.

As for housing, Hollingsworth said she loves density and growth and would “support legislation ending single-family zoning,” but she wants the city to grow “thoughtfully.” Seattle has historically protected white neighborhoods, concentrating growth in communities of color, she said. She wants to see growth all over, not just in D3.

She also believes neighborhoods can preserve character and grow. For example, her grandmother turned her Central District home into a triplex, which preserved the home’s original facade and added more neighbors plus income for the landlords, which are now her dad and her aunt.

If not for that triplex, Hollingsworth said she could not afford to live in the district like so many others who have been priced out by gentrification.

According to the Capitol Hill Seattle Blog (CHS), Hollingsworth and her family have a long professional and personal relationship with Ian Eisenberg. Eisenberg owns Uncle Ike’s, a weed shop and a “symbol of Seattle gentrification” for some in the district, particularly in the Central District, according to the South Seattle Emerald.

In a 2021 press release, Hollingsworth announced an exclusive retail relationship between her family cannabis company and Uncle Ike’s. As CHS previously reported, Hollingsworth said the company came to that decision because of a personal and professional connection.

“We both went to the same private high school, although not at the same time. Seattle Prep is a Catholic school in the Central District that is predominantly white. I’m Black. Ian is Jewish. So we relate to the experience of being a bit different while growing up. It provides a different perspective. Ian and I see things similarly,” she said in the press release.

Additionally, Hollingsworth said in the press release that her family company “chose Uncle Ike’s as our exclusive retailer because of its incredible efficiency.”

But she told The Stranger a different story. Despite her use of the word “chose,” Hollingsworth said her family’s business does not choose who it works with, but rather the dispensaries choose to work with them as a vendor.

Even though she gushed about her personal connection to Eisenberg in the 2021 presser, she said the exclusive partnership came about because no other cannabis dispensary wanted to work with Hollingsworth Cannabis after the company advocated for a cannabis social equity program in the State Legislature. I emailed the four other dispensaries that used to carry Hollingsworth Cannabis to verify if they stopped selling her weed because of her advocacy. I will update if any respond.

The relationship with Eisenberg could call into question Hollingsworth’s commitment to combating gentrification. Hollingsworth said it's just business.

“I don't agree with everyone's politics, but I'm a vendor in somebody’s store trying to have a business to survive,” she said. “And I would hope that people want to support Black business.”

Hollingsworth, Seattle LGBTQ+ Commission Co-chair Andrew Ashiofu, and whoever else jumps into the D3 race will compete to replace the long-sitting socialist Council Member Kshama Sawant. She made a name for herself as an unflinching advocate for renters and working people, and some liberals thought she was an annoying populist, so they tried to can her in 2021.

Hollingsworth voted to retain Sawant because she did not believe the recall was a fair, democratic process. Also, she said she’s “seen people do worse” than Sawant. She declined to answer when I asked if she voted for Sawant over PrideFest director Egan Orion in 2019. She said, “I just want people to understand my values and not who I voted for as a reason why to either not like me or like me.”

Regardless of how she voted in 2019, Hollingsworth said she’ll bring a new perspective to the district after a decade of Sawant.