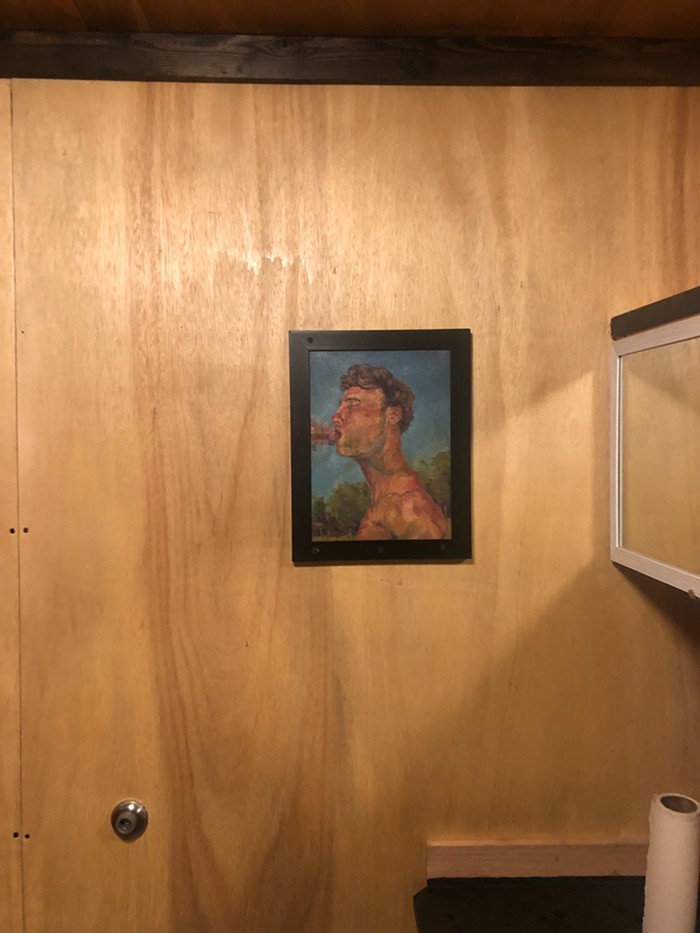 A "post-analog" painting of a dude sucking dick. The painting is in a bathroom at the Lumber Yard Bar, one of the new gay bars in White Center. Chase Burns
There were a few things that surprised me during my drunken Saturday night in White Center. First, this painting: 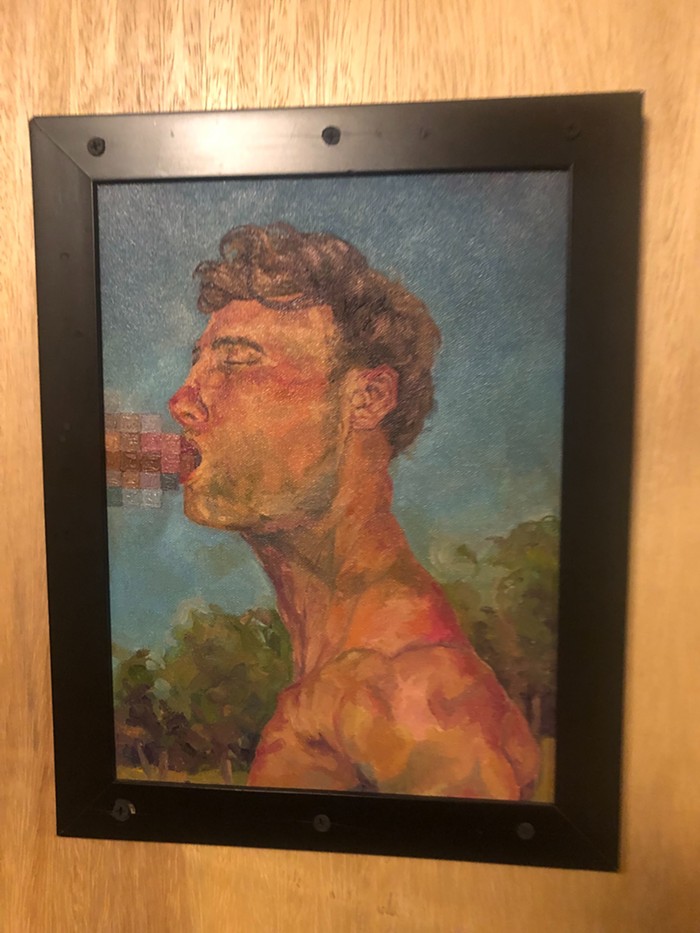 It's screwed to the wall, probably to deter thieves like me. CB
An impressive work of art. It's found in the bottom floor bathroom at Lumber Yard Bar, one of the now MANY (as in TWO and, by the end of this year, THREE) gay bars on the 16th Ave strip in White Center. Is the painting a commentary on FOSTA-SESTA? Or the Washington State Liquor and Cannabis Board's militant attack on dicks in gay bars? Is it a fine example of "post-analog" painting? Obviously, the answer to all of these questions is Yes. Or maybe Yas. But the painting leads to my second surprising revelation: White Center is becoming a very gay destination.

After successfully gentrifying Capitol Hill and turning it into a bedroom community for Amazon elites, the gays have set their sights on White Center. I had this thought when I first visited Lumber Yard Bar during its opening in January 2018, but it became even more clear this weekend. First, the line for Lumber Yard was out the door. The doorman wasn't letting people in because the place was at capacity.

While waiting in line, a friend yelled at me from across the street. They were working the door at The Swallow, a new gay bar opened by noted queer Seattleite Marcus Wilson (the co-creator and former manager of Pony, who has also performed as drag artist Ursula Android and played in the electro-punk group Ononos). That bar, which is very nice, has aesthetic touches that we've come to associate with Wilson's projects (a "throwback Castro and West Village aesthetic," as The Stranger's Dave Segal once put it). It's fun and cruisey, both in that it feels like a gay cruise ship and like you could cruise a few guys and get your dick sucked out in the alley.

I spent the night going back and forth between Lumber Yard and The Swallow and noticed many other patrons doing the same. Both bars were packed. At the Lumber Yard, I met two men who told me they are producing the first ever White Center Pride this June.

I also found out that Unicorn is opening a second bar in White Center this December. Westside Seattle had the scoop on it last year, but I missed the news. It's going to be the largest bar in the area (15,000 square feet with games, two stages, a full kitchen, and a rental space for events, according to Westside Seattle), effectively turning White Center into a nightlife hub. Biscuit Bitch also recently announced they're expanding to the strip. Plus, a new RapidRide H Line will be servicing White Center starting around 2021. It's a new world out there. "THIS IS THE NEW CAPITOL HILL" was shouted by many drunk gays throughout the night.