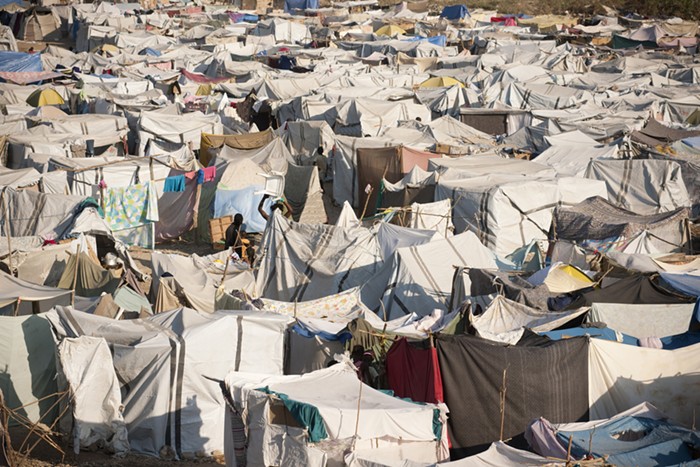 Ann Davison Sattler wants to bring this to an abandoned Sam's Club near you. Claudiad/Getty Images
Solving Seattle’s homelessness crisis has perplexed our local leaders for years, but city council candidate in District 5 Ann Davison Sattler thinks she has a solution: aggressively enforce anti-camping laws and then round up any remaining homeless people and force them to live in abandoned warehouses.

The plan calls for housing 2,000 people at two vacant Sam’s Club locations in North Seattle and Renton. Imagine it: Hurricane Katrina style housing without the hurricane.

The plan seems questionably legal and one of Seattle’s leading homeless service providers called it “not believable in any regard” but Sattler isn’t just some kook on Facebook, she is one of two people who could hold the District 5 seat on the Seattle City Council next year. So, it’s worth examining—what the hell does this Seattle Times-endorsed candidate want to do to people experiencing homelessness?

Her plan, laid out in a series of four smartly designed infographics, calls for first building three “FEMA style relief shelters” at an abandoned Renton Sam’s Club, a North Seattle’s Sam’s Club, and an old mill site on Harbor Island in the Port of Seattle. Sattler thinks she can house up to 5,500 people at the three sites for a total cost of about $7.9 million, a fraction of the city’s current $90 million homelessness services budget (although these numbers seem somewhere between made-up and incredibly optimistic).

Once the shelters are up and running, Sattler’s plan calls for buying six buses that can be used to “transport people and their belongings” to these FEMA-style relief shelters.

“After fully implementing these complete-access solutions, the only way to ensure the crisis will improve is by enforcing no-street-camping regulations,” Sattler says on her website. “If those struggling are provided a livable, sheltered environment with substance abuse treatment and services, they are more likely to find a path back to self-sufficiency and community.”

Sattler is running against incumbent Council Member Debora Juarez. Sattler only earned 26.7 percent of August’s primary vote. But Juarez also only received 45.1 percent, a share that is considered low for a sitting incumbent.

“I can’t imagine anyone thinking it’s a good idea to literally warehouse 1,000-2,000 people together, even if you had ample staff to run the place (which this plan decidedly does not),” Malone said when contacted for a comment. “Larger shelters are more difficult to operate and typically less desirable to stay in for the reasons you can imagine.”

Sattler’s numbers also don’t add up. She claims on her website that the shelters will provide people access to “specialized mental and physical health services” but her budget provides almost no money for staffing. Her infographics say the shelters will have “basic staff only, no special services.”

Malone said that having a “huge” client-to-staff ratio would be very problematic for Sattler’s shelters and that her plan doesn’t even consider various other required expenses.

“I see most of the money is earmarked for debt service, and the remaining amount would be used for 'basic staff' and 'sanitation costs' shown as toilets and showers. Of course, any operation has other expenses, such as utilities, insurance, and maintenance costs,” Malone said.

Sattler said when I reached out to her that her plan is backed up by evidence and that “every number in the analysis has a source.” She pointed to cost estimates from tent companies, trailer auctions, sanitation rentals, and bus auctions. She said her staffing numbers were based on “UN refugee resources.”

Sattler did not respond to a follow up question by email asking how her plan could provide specialized health services with only basic staffing levels.

She said she choose the emergency shelters based on a weighted policy analysis that included six factors (cost, adaptability, scalability, land use, personal dignity, and political feasibility) but she declined to provide that analysis. She said the FEMA-style shelters would provide a transition to permanent housing.

“Having one proposed location for emergency shelter while we simultaneously constructed dormitory-style housing on another location would allow us to transition to that permanent housing,” Sattler said.

Asked to respond Malone's claim that her proposals were “not believable in any regard,” Sattler said the “info graphic doesn’t leave much room for explanation.”

After looking at these infographics, the only other explanation I would like is how the Seattle Times Editorial Board thought these ideas were worth endorsing.