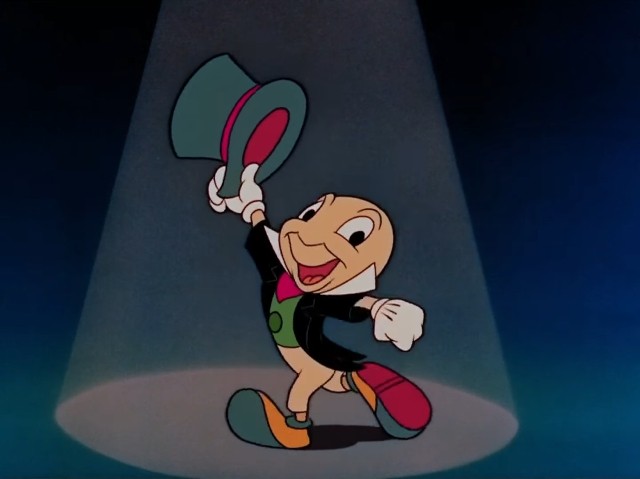 Jiminy Cricket's Christmas includes "Mickey's Good Deed," a vintage cartoon from 1932 that had never been released on video. Disney
Unstreamable is a weekly column that recommends films and TV shows you can't find on major streaming services in the United States.
Sponsored

This week, we're doing another special holiday-themed Unstreamable: We return to the Disney Christmas classics with Jiminy Cricket's Christmas and A Disney Christmas Gift; a French family irons out some problems in La Bûche; Mia Farrow gets very, very weird and jolly in Reckless; *.

Read our other recommendations here.

Get this shit for your kids. CB

Disney+ has a handful of holiday options, and I mean a literal handful. Their catalog is deceptively small. They say they'll have "over 500 film titles" by the end of their first year. My free trial for the streaming service expired and I haven't returned, but I remember the platform boasting a few good vintage Disney holiday specials that looked okay. They're mostly schlepping their new holiday movie called Noelle with Anna Kendrick and Bill Hader that looks… painful. A stain on Hader's fine name.

This lack of classic, old-fashioned Disney holiday cheer became more apparent to me when I picked up these clutch Disney tapes from Scarecrow Video. Few Disney holiday offerings beat Jiminy Cricket's Christmas, and, if my anecdotal research is true, a good amount of kids in the '90s had this tape. It's very cute and based on A Disney's Christmas Gift, which came out a decade earlier and is all right. They're both the same format: a collection of Disney animated shorts built around Christmas themes with some antique animation thrown in the mix. The Jiminy Cricket one is hosted by Jiminy Cricket, obviously. You can find it on eBay. Snag it up. CHASE BURNS

Available for rental on VHS at Scarecrow Video . 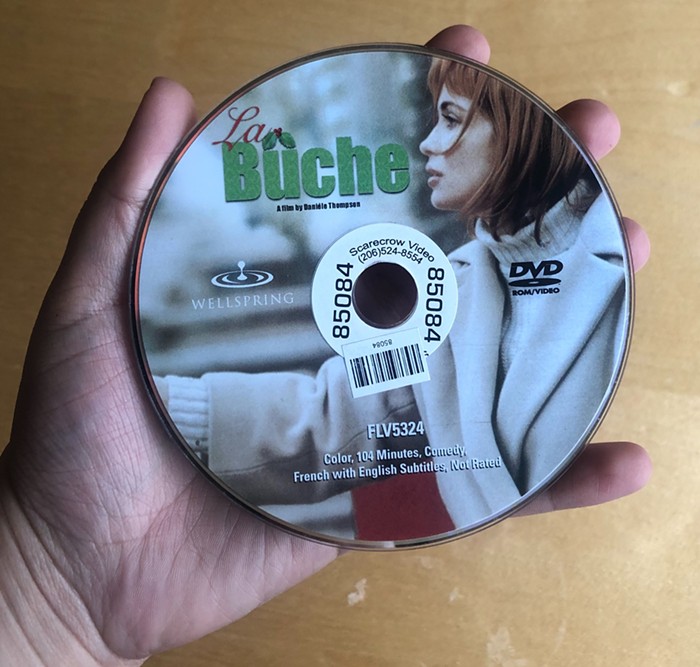 "Bûche" means "log," but in this context it's referring to a Christmas cake that's in the shape of a log. Cute. Jasmyne Keimig
La bûche is loosely analogous to Love, Actually in that it takes several different characters and has their storylines collide in joyous, sad, and cloying ways. Also it's French so they throw a whiff of intellectual superiority and incest in there to "spice" things up. The film follows three sisters (one of whom is played by Charlotte Gainsbourg) who try to comfort their aging mother during the holidays after the death of their stepfather. The sisters attempt to balance the opposing wishes of their divorced parents, along with the demands of their own partners. Family secrets (and pregnancies) are revealed as Christmas approaches. It's a very French, messy dramedy that's perfect for that murky period before the New Year. JASMYNE KEIMIG
Available for rental on DVD at Scarecrow Video and Netflix DVD.
***
RECKLESS
USA, 1996, 91 min, Dir. Norman René 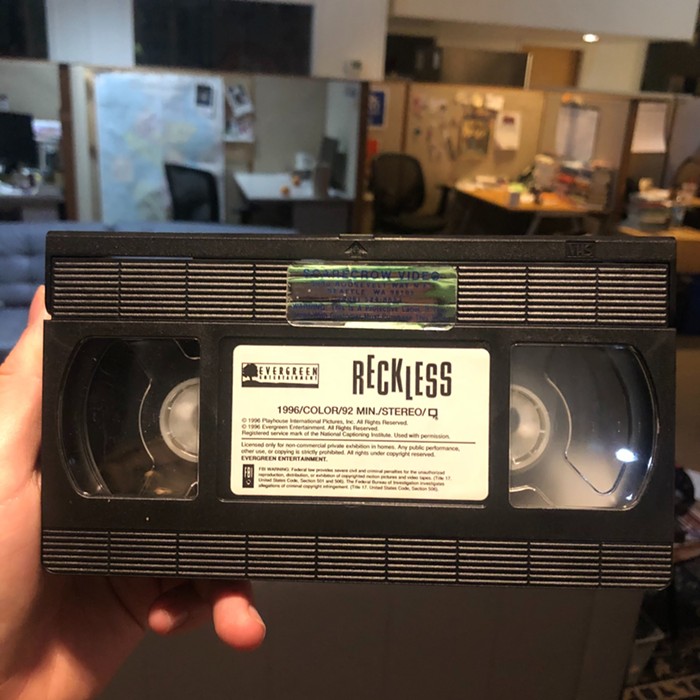 This is a good picture. Oh, I mean the literal picture, not the film. Chase Burns
Reckless is one of the strangest movies I've ever seen. Not strange like Cats, which uses curiosity to create a horrifying cult classic, just recklessly strange. The film's title is a critique of itself. Reckless, the film, is based on Reckless, the play, both from writer Craig Lucas. It follows a terminally delightful woman (Mia Farrow) whose husband puts a hit on her life because he can't stand her cheeriness.

The film's plot jumps with impossible speed. It is very dreamlike. Too dreamlike. Aggressively dreamlike. It seems to want to be a play, which is never good for a film. I love this line from a 1995 review in the San Francisco Examiner: "Lucas just drops events into the action like non-sequiturs in conversation.” At one moment, we're in a winter wonderland. The next, everyone's a nun! Then a therapist! People are deaf! Then they're not! That said, I find something admirable about the recklessness, but I'm known to be attracted to disaster. CHASE BURNS

Available for rental on VHS at Scarecrow Video .
***
🚨STREAMABLE ALERT🚨
*It's come to our attention that The Irony of Fate has been uploaded to YouTube by the studio that created it. We don't consider unauthorized YouTube uploads or illegal digital copies to be streamable, but the upload is authorized in this case. We'll leave the blurb since we still recommend it. Our bad! A very Soviet New Year's Eve film. JK
This screwball romantic TV comedy was a smash hit in the Soviet Union when it first broadcast on January 1, 1976. It's still popular in former Soviet states and is traditionally played every New Year's Eve. The film involves a ton of booze, and the plot is zany.

On New Year's Eve in Moscow, after celebrating his engagement in a banya with his boys, the utterly drunk and bumbling Zhenya (Andrei Myagkov) gets put on a flight to Leningrad by mistake. After passing out on the plane, he manages to get into a taxi once in Leningrad, giving the driver his Moscow address: 3rd Builders' Street. It turns out Leningrad has that exact same street name as Moscow, with a building that looks exactly like his, and an apartment laid out just like his own. When he takes off his pants to dutifully pass out in what he thinks is his apartment, the flat's real tenant Nadya (Barbara Brylska) comes home to prepare a NYE meal for her fiancée Ippolit (Yuri Yakovlev) and is shocked by this strange, drunk man in her apartment.

Taking place mostly within the confines of Nadya's flat, the rest of this two-part TV movie deals with Zhenya, Nadya, and Ippolit fighting with one another, trying to make sense of this cosmic coincidence while also figuring out how to get everyone back to where they belong. There are lustful glances, torn up train tickets, and songs to ring in the New Year. Russia looks cold as fuck in this film, but the story keeps you warm. JASMYNE KEIMIG

Available for rental on DVD at Scarecrow Video .
The Stranger depends on your continuing support to provide articles like this one. In return, we pledge our ongoing commitment to truthful, progressive journalism and serving our community. So if you’re able, please consider a small recurring contribution. Thank you—you are appreciated!
CONTRIBUTE NOW