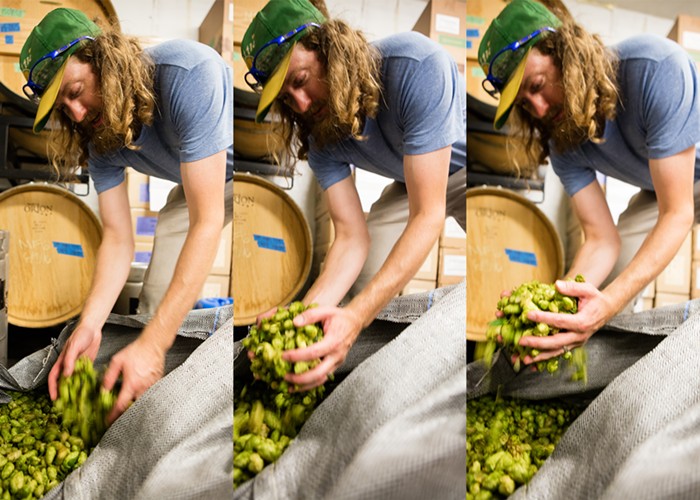 Steve Luke is Seattle's hop whisperer. Lester Black
Seattle’s beer scene just got a nod from one of the most respected names in American food. Steve Luke, the head brewer and founder of Cloudburst Brewing, was nominated Wednesday for a James Beard Award.

Luke opened Cloudburst Brewing in January of 2016 and quickly gained national attention for his hop-focused beers. In a city awash with IPA, his beers consistently standout from the pack with remarkable flavor and supreme balance. I can’t count how many times I’ve been completely surprised by a Cloudburst IPA.

Luke wasn’t the only Seattle name on this year’s James Beard nomination list, which will be narrowed down to a shorter list of finalists on March 25 before winners are announced on May 4. Other nominees include: Liz Kenyon of Rupee Bar, Shota Nakajima of Adana, Chera Amlag of Hood Famous Café and Bar, and Mutsuko Soma of Kamonegi. Canlis and L’Oursin were nominated for their hospitality and wine programs. See a full list of local nominees at the bottom of this post.

I spoke with Luke this morning and he said the award nomination was “unexpected and exciting.”

“We look at it as an award for all of us,” Luke said. “I’m at the front of Cloudburst a lot but everybody behind Cloudburst keeps this ship on course.”

I’ve called Luke a “hop whisperer” in the past because of his freakishly strong ability to coax flavor out of hops. He can give an IPA such strong notes of watermelon or cherry or creamy coconut or flowers or pine that it can seem like Luke is artificially flavoring his beer. But he’s not; he just treats hops with the same care and attention to detail that a great winemaker treats grapes.

Cloudburst has also resisted the modern beer trend of removing the bitterness from IPA and replacing it with cloying sweetness. Cloudburst’s beers are almost always dry and at least moderately bitter. Luke said this balance is because he’s trying to make beers that he would drink himself.

“A lot of the evolution of the IPA style doesn’t lend itself to the makers actually enjoying what they’re making,” Luke said. “Show me a brewer that is drinking their hazy lactose milkshake IPA after work. It’s hard to find.”

Luke’s hop mastery comes, in part, because of his close relationship with the region’s hop producers. He works with these farmers to find new hop varietals and frequently sources hops directly from small farms, which gives him better control over the qualities of the hop. Luke’s connection to Yakima Valley is clearly on display during wet hop season, when Luke spends every fall making a dizzying amount of fresh hop beers, which are brewed with uncured hops that have been picked within 24 hours of brewing.

Luke said he thought his wet hop beers were partly why James Beard gave him the nod.

“We put a lot of energy into making those hyper-seasonal beers and connecting with the growers and farmers that produce our main and most important ingredient,” Luke said.

Luke left Elysian shortly after the pioneering Seattle brewery was bought by Anheuser-Busch InBev, the largest beer company in the world. The timing of his departure was coincidental—he said he was already planning on opening his own brewery—but he hasn’t been shy about criticizing the corporate beer company. In 2018, while accepting an award at the Great American Beer Festival, Luke unbuttoned his flannel shirt to revealed a shirt that said “FUCK AB-INBEV.” LA Weekly called it the “defining moment” of the 2018 festival, which is the most watched beer award show in America.