What to Expect When You're Expecting Coronavirus 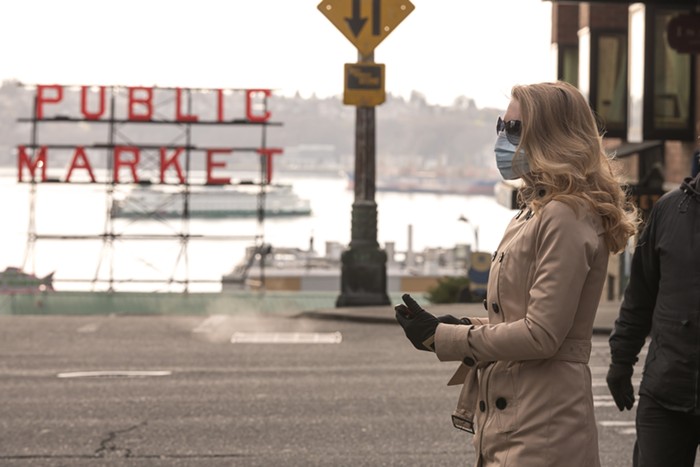 On the downside, people are dying. On the upside, rush hour traffic has been great. 400tmax/Getty Images
Seattle may be behind the times in plenty of things (fashion, time zones) but we are ahead of the curve when it comes to COVID-19, the coronavirus that originated in Wuhan, China, and has now infected over 110,000 people across the globe. The first confirmed case of COVID-19 in the U.S. was in a 35-year old Seattle-area man who reportedly contracted the virus on a trip to China, and since his return to the U.S. on January 15, at least 190 more people have tested positive in King County, including 22 who have died. As for the actual number of infected, we have no idea: Most people aren't being tested.

If you live in the Seattle area, you already know what the last few weeks have been like (in a word: weird) so this post is not for you. This post is for everyone else: those who live in small towns or big cities that have yet to experience the outbreak and who are hoping against hope that their community will somehow dodge this particular virus.

The good news is, this isn't Ebola or swine flu or SARS or Marburg or malaria or something more deadly. The overall death rate is estimated to be under 2 percent, and the vast majority of those under the age of 60 who contract this illness will recover just fine. (For those who made the poor choice of being born before 1960, however, things may be different.) The really bad news is, the virus is so contagious—and our world so interconnected—that it's possible the only people who won't be touched by the disease and its effects on society are those who are already dead.

If you want to be prepared for what’s coming, there is no better place to look to than Seattle, so hello from your future. Here’s what to expect when you’re expecting coronavirus to come to town.

You’re going to be spending a lot of time at home.
Last week, King County Executive Dow Constantine announced that all county employees who are able to do work from home should do so until the end of March. He also announced that all non-necessary in-person meetings will be suspended, and he urged all employers in the region to take the same precautions. Many of them listened: There’s no way to quantify how many people are currently working from home, but the city, while not dead, is certainly quieter than normal. There are some upsides to this (I haven’t been out of soft pants in a week) but after a while, your spouse or partner or children or roommates or polycule or whoever you live with will start to grate on your nerves. For this, I recommend noise-canceling headphones, solo walks, and a wide assortment of weed. If weed isn't your thing, watch every episode of General Hospital, join our quarantine book club, and when your kids try to get your attention, tell them you're "social distancing."

Traffic will be lighter than normal.
Traffic delays in Seattle are as regular as the rain, but as the outbreak of COVID-19 has worsened, traffic has waned. I-5, which is normally a parking lot during rush hour, actually looks like a functioning roadway, and buses, trains, light rail, ferries and other modes of public transit actually have empty seats. It’s like glimpsing the city with a third of the population—and, honestly, it’s pretty nice… or it would be if the blissfully light traffic were due to more robust transit systems and not a pandemic.

Events will be canceled.
So many events in Seattle have been canceled that The Stranger’s calendar team—which maintains the city's most comprehensive repository of things to do—has probably spent as much time on cancelations as on events that are actually happening. I’ve personally had two speaking gigs canceled in the past week (turns out coronavirus can do what Twitter cannot) and I assume more will be canceled before this week is over. It’s disruptive, of course, but for those who depend on events for income, it could be devastating. We’re already seeing this in Austin, where the cancelation of SXSW has had such an effect on the economy that officials have declared a local emergency. Still, some big events are still on: The Sounders Football Club played a home game last weekend, and you can still go to restaurants, movies, shows, dance parties, etc. But should you? City and state leaders are telling people to avoid crowds of 10 or more people, and plenty of event organizers are taking note and canceling or postponing planned events. This includes the Emerald City Comic Con, which usually attracts nearly 100,000 wizards, warlocks, furries, gamers, and assorted other dweebs, nerds, and dorks to the Seattle Convention Center, but was canceled last week. And even worse than cosplayers losing their venue: The Convention Center has had so many cancelations that they reportedly laid off 100 employees this week.

Schools will close.
Most Seattle schools remain operating as normal at this point, in part because school closures haven’t necessarily been shown to slow the spread of the virus (if students aren’t in school, they have to be somewhere else). There are, however, some exceptions to this, including an entire school district north of Seattle that moved all classes online for the rest of the month, in part to protect the high number of faculty and staff in the district who are over 60. That’s 24,000 students from kindergarten to 12th grade who, all of a sudden, are out of school for a minimum of three weeks. Parents have been scrambling to make accommodations, and like everything in life, it’s a lot easier for those who can stay home themselves or hire someone to make sure their kids don’t burn down the house than it is for those who have to go to work or can’t afford outside help. And it’s not just schools: Most universities in Seattle are now operating online only for the remainder of March.

Businesses will be hurt.
Some businesses will benefit from the ongoing pandemic (for instance, grocery stores, Amazon, toilet paper manufacturers, Purell) but many others will not. Restaurants, bars, venues, hotels, airlines, cruises, and an array of other industries have been and will continue to be hit hard by this virus and its downstream effects. Even before the virus had been confirmed in the U.S., Seattle businesses that depend on exporting to Asia saw sharp declines in revenue. Taylor Shellfish, one of our more famous seafood purveyors, suspended its matching 401K plan for employees and cut the pay of upper management by 10 to 20 percent. Now that the virus is actually snaking its way through our city, things are just getting worse, especially for those businesses that depend on foot traffic to stay afloat.

Health care systems will be stressed.
Seattle area hospitals have seen an uptick in patients as people who think they are experiencing the symptoms of coronavirus seek testing, which is in very limited supply, and treatment, which doesn’t really exist. There’s some dark irony here: People may go to the ER with the flu and leave with COVID-19, which puts both patients themselves and their communities at further risk while, at the same time, taking much-needed hospital resources. In light of this, public health officials are advising that anyone who thinks they may have contacted COVID-19 to talk to their doctor before trying to get a test, but unless the patient has underlying health issues, the best way of treating this illness is basically to take care of yourself: Get lots of sleep, drink plenty of fluids, eat nourishing foods, and—mostly—stay away from other people as much as you can. Self-quarantining is the best way to slow the spread of the virus, and unless you are dying, going to the hospital probably won’t help.

Take it from us: Now is the time to start planning.
When COVID-19 first appeared in China, the federal government should have started planning for the inevitable. They did not, and when the virus appeared here, local and state officials were left fruitlessly trying to catch up. So take advantage of what Seattle is learning right now. Ask your state and local lawmakers if they have plans for quarantine and treatment sites. Ask your boss if there’s a plan to telecommute. Stock up on supplies, including disinfectants and medications. Stop licking doorknobs. Don't touch your face. If you own a business, prepare for declines in revenue. If you own a child, make plans for if/when schools have to close. Talk to your elderly friends, relatives, and neighbors about what to do if they get sick. If you can, consider taking your parents or grandparents out of assisted living. If you have travel plans or a wedding coming up or if you need chemo or dialysis or surgery, start thinking about plans B, C, and D. Assume that routines, health care, and supply chains will be disrupted, because this thing is coming, and the best way to save yourself and others is to prepare as much as you can before arrives on your doorstep.