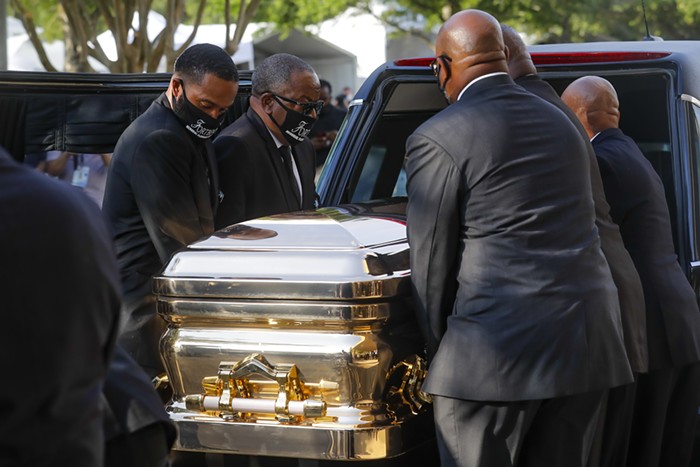 Thousands of mourners showed up to The Fountain of Praise church in Houston today during a public visitation of George Floyd's casket. Getty Images / Pool
BREAKING: Just after 6:30 pm, police moved away from the ongoing standoff at 11th and Pine and let protesters walk past the East Precinct. For the first time in a week, demonstrators were allowed to move freely. A slight confusion remains in the crowd, with some suggesting it's a "trap." Organizers are encouraging the crowd to not burn down the precinct. The crowd was chill with that. We'll have more updates throughout the evening.

“We have to remain peaceful....they gave us this precinct and we’re not going to destroy this motherfucker,” speaker says. Crowd seems largely to agree.
— Rich Smith (@richsssmith) June 9, 2020

Thousands come out to public viewing of George Floyd's casket in Houston today: Floyd—who grew up in Houston's Third Ward—was killed by a white police officer in Minneapolis over Memorial Day weekend, setting off protests around the globe calling for justice and the end of police brutality against Black people. Held at The Fountain of Praise in the city, only 15 guests were allowed in the church at a time, and were required to wear masks and gloves. Floyd will be buried next to his mother, Larcenia Floyd, at the Houston Memorial Gardens cemetery.

Derek Chauvin, the Minneapolis police officer charged with murder in the killing of Floyd, will have his bail set somewhere between $1 million to $1.25 million depending on agreement to certain conditions. His next scheduled court appearance is on June 29, when he'll enter a plea, reports the New York Times.

Nikolas Fernandez, the man who allegedly drove into the crowd of protestors and shot one before being apprehended by the police yesterday, is being held by the King County Superior Court for suspicion of assault in the first degree: The bail was originally set at $200,000 then modified to $150,000 by Judge Anne Harper after a friend spoke on Fernandez's behalf. Rich Smith has more details on the hearing here.

Seattle Police Department clears out East Precinct: After one of the most hostile and aggressive nights of police response to protests, SPD announced their decision to clean out their precinct on 12th and Pine. The intersection has been blocked off for several days, with the barricade on 11th and Pine becoming the frontline of protests on Capitol Hill. Police took items of value out of the office and attempted to secure the building as best they could.

Portland Police Bureau Chief Jami Resch resigned today, effective immediately: Portland Mercury's Blair Stenvick reports that after 10 days of protests in the city "that saw heavy uses of force from PPB, including tear gas and other chemical agents, rubber bullets, and pepper balls," Resch decided to step down of her own accord. She will be replaced by PPB Lieutenant Chuck Lovell, a Black man who had previously served as a school resource officer in the city. Check out more of Stenvick's reporting on the issue over on our sister blog, here.

Seattle's drag scene is NOT with the police shits, calls to defund the police department in new open letter: Matt Baume talked with the letter's organizers Rowan Ruthless, Eucalypstick, and Jane Don't—you can check out what they had to say here. Their full letter—signed by over 100 drag performers—is below:

Councilmember Teresa Mosqueda calls for Mayor Durkan to resign in front of the city council: after the mayor's lukewarm and ineffective responses to SPD gassing and use of force against demonstrators over the past ten days of protests, reports Nathalie Graham. "I think the mayor should assess in this moment," Mosqueda said, "ask herself if she is the right leader, and resign." Read more of what went down at the city council meeting this morning here.

Despite concerns over coronavirus transmission, Donald Trump's campaign will start hosting rallies again this month: He hasn't held a rally since March, when the pandemic first began, reports Politico. No safety measures or locations have been announced. "Americans are ready to get back to action and so is President Trump. The great American comeback is real and the rallies will be tremendous," said campaign manager Brad Parscale. Oh there's definitely going to be a comeback, but it'll probably go by the name COVID-19.

Bon Appétit's Editor-in-Chief Adam Rapoport resigns after a photo surfaces of him in brownface: Writer Tammie Teclemariam unearthed a 2013 Instagram photo of the former EIC and his wife in apparent brown face with the caption "me and my papi" and "#boricua" earlier today, causing an uproar among the magazine's readers and the food media community. In a statement on his Instagram, he says he's stepping to "reflect on the work that I need to do as a human being and to allow Bon Appétit to get to a better place."

This revelation has led to a number of Bon Appétit's chefs and contributors of color to speak out about their mistreatment at the magazine-cum-Youtube powerhouse: In particular, Sohla El-Waylly—one of BA's sole editors of color to appear on their immensely popular Youtube channel—revealed that she does not get paid for her appearances on the channel, though all the other white editors do. "I've been pushed in front of video as a display of diversity," she says. As of this writing, BA editors and contributors Molly Baz, Priya Krishna, Hawa Hassan, Carla Lalli Music, and Christina Chaey have come out in support Sohla, demanding that BA chefs of color be compensated fairly and treated equally to their white colleagues.

In case you’ve missed it: Not only is Sohla one of the only front facing Bon Appetit editors to denounce EIC Adam Rapoport doing brown face, apparently only white BA editors are paid for their video appearances. Here’s her Instagram story just now pic.twitter.com/h0uPMlJYHN
— Sarah Manavis (@sarahmanavis) June 8, 2020

OK, I'm feeling weird, it's time to listen to my Gramma Louise's advice: She always told me that when I don't know how to feel, I should put on Miles Davis's Kind of Blue. You got it, gramma. Here's "Flamenco Sketches."