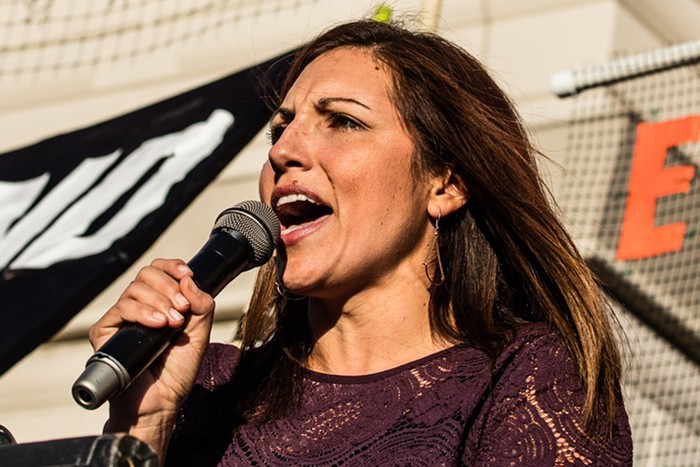 Council member Teresa Mosqueda said in this morning's council meeting that she also wants an inquest into SPD's budget. NATE GOWDY
Councilmember Teresa Mosqueda is not beating around the bush. She's had it with demonstrators on the street and residents in their homes choking on tear gas. She's done with the mayor's milquetoast responses that have been too little, too late—and not effective at stopping the Seattle Police Department's forceful methods for dispersing crowds.

Despite Mayor Durkan's "ban" on tear gas on Friday (which still allowed SWAT to use the gas, and for SPD to do so as well if authorized by Chief Best), demonstrations this past weekend turned violent. Tear gas was deployed just 48 hours after the "ban." And possibly earlier. On the heels of these announcements, a letter signed by prominent elected officials calling for Durkan's resignation circulated. Councilmember Kshama Sawant announced that Durkan should resign and that if she didn't she would draft articles of impeachment.

Today, Mosqueda called for Durkan to resign in front of the entire council.

"I think the mayor should assess in this moment," Mosqueda said, "ask herself if she is the right leader, and resign."

Sawant also called for Durkan's resignation this morning. Council member Tammy Morales seemed receptive to the idea as well. It would take a two-thirds majority vote from the city council to remove the mayor from office.

On top of the calls for Durkan's resignation, Mosqueda announced that the council will "be launching an inquest into the Seattle Police Department's budget."

"What we’re hearing from the community right now is that our residents don’t feel safe in our city," said Mosqueda, the chair of the council's select budget committee. "We are not going to nibble around the edges around the mayor’s proposed budget. We will not pass the mayor’s proposed budget until we as a council have a chance to get a full, thorough, simultaneous, transparent, deep dive into SPD's funding."

Typically, the mayor submits her own proposed budget for what should be funded and how around September. Then the council makes recommendations and changes to that budget, votes, and signs off on it for the mayor's final approval. Mosqueda has dispensed with that—at least as far as the police budget (what she referred to as a "black box") is concerned.

Budget meetings will start this Wednesday in the council. Mosqueda wants to identify what the expenditures in the "over $400 million" allocated to SPD are for. She'll start with how much has been spent on everything related to the police response to these protests: How much has been spent on tear gas? On rubber bullets? On riot gear? On arrests? The council does not know but Mosqueda is determined to find out.

She wants to reduce the budget by "ideally 50 percent" and reinvest it back into "communities that we have failed."

Sawant (who has called for cutting SPD's budget for years) and Morales were vocally supportive of the idea of 50 percent reductions. Other council members supported cuts to SPD (even Alex Pedersen and Debora Juarez!), but it's unclear how significant these cuts will be.

Across the board, local officials are angry. Many heeded a call from community members desperate to de-escalate SPD's response Saturday night. Four (Mosqueda, Andrew Lewis, Dan Strauss, and Lisa Herbold) showed up on the front lines.

It remained peaceful, mostly thanks to Herbold's leadership, according to Lewis. However, Sunday night, when Sawant was on the frontlines (she told Stranger staffer, Rich Smith, she was in bed with a debilitating headache on Saturday night and couldn't go to the protest), tear gas was still deployed.

"If we as electeds are going to show up at police barricades we need to make sure our sole mission is deescalating," Strauss said, insinuating that Sawant's presence at Sunday's demonstration—a demonstration that resulted in some of the most aggressive SPD action on protests Seattle has seen yet—exacerbated tensions.

"I do not appreciate council member Strauss’ remarks...insinuating that I may have played some role in provoking the police," Sawant said. She called this victim-blaming.

Lewis added his two cents on the issue. He said the fact that Sawant's presence did not deter police from tear-gassing demonstrators showed "that our presence alone isn’t going to be enough" and is "more evidence that we need to be pursuing more action through our legislative powers."

All council members are in support of banning tear gas for good. Sawant is introducing legislation that will do that, as well as ban other crowd control methods like pepper spray and rubber bullets. She plans to introduce that later this afternoon, to be voted on potentially next Monday.

Every council member is expected to sign onto a letter by this afternoon asking Durkan and Best to "change SPD's tactics immediately." A press conference last night from Durkan and Best addressed these issues and appeared to make forward progress on de-escalation tactics for SPD like having them reduce their presence and remove their riot gear. Those words were said before Capitol Hill erupted into chaos and bedlam.

Mosqueda has had it with meaningless words.

"The tools they’re using aren’t illegal," Mosqueda said. "The riot gear has been paid for by us. We have allowed [SPD] as a city to grow into the entity that they are today. We have continued to invest in the very system that is being criticized and we have continued to fund them. How are we going to take ownership over the budget? Let’s do that beginning on Wednesday."

Recommendations for reductions in SPD's budget are expected to be finalized in mid-July.