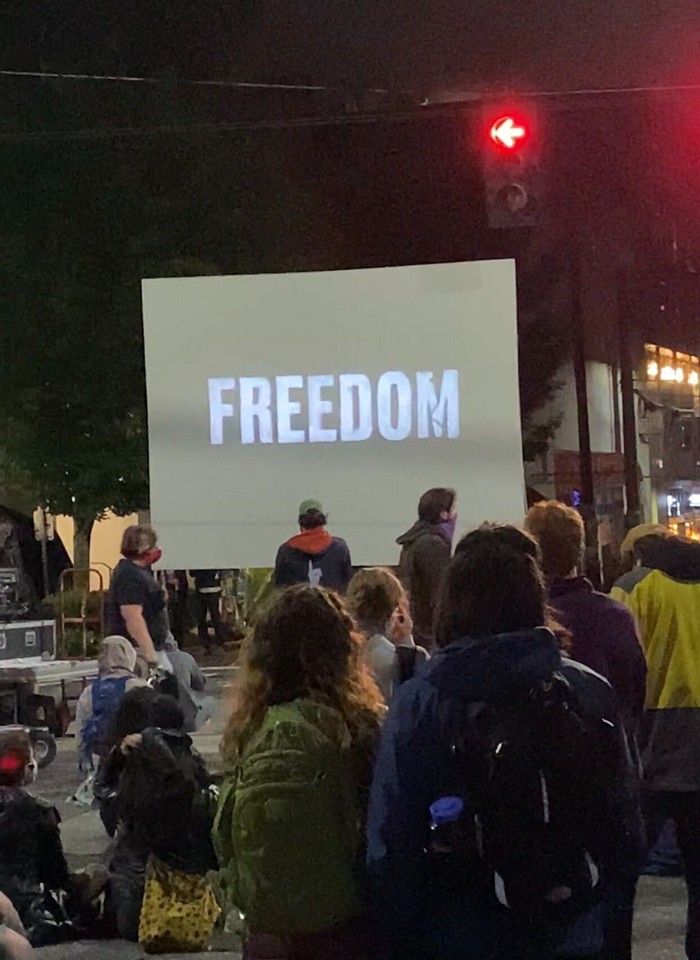 The six-block radius around Seattle's East Precinct began life as "Free Capitol Hill" on Monday, after the Seattle Police Department packed up and left the building, letting protesters freely march past the station for the first time in a week.

By early Tuesday, demonstrators had established a perimeter with improvised barriers and deputized scouts. In the afternoon, the "No Cop Co-Op" popped up, slinging kebabs, snacks, and free water to passersby. A teach-in square was established at the intersection of 12th and Pine. Tents were pitched near the precinct, where people were encouraged to stay throughout the night, or even just for two or three hours to hold the space. And by nightfall, they'd even built their own outdoor cinema.

"CHAZ," or The CHAZ, was the hard-earned result of over a week of demonstrations against the Seattle Police Department and the National Guard. Demonstrators protested the killing of George Floyd, called for an end to police brutality, proposed divestments from SPD and investments in Black communities, and demanded the outright abolition of police. Those demands were met with blast balls, tear gas, small concessions from politicians, and an active shooter.

As a person named Chase, I occasionally get called Chaz. It's always alarming. Chaz invokes an image of a man with ramen noodle hair who owns many puka shell necklaces. There are good people named Chaz—like Chaz Bono!—but by and large it's a name I'd like to run from.

News of this anti-capitalist police-free Vatican City inside Capitol Hill has spread throughout the country, with "Capitol Hill Autonomous Zone" trending in the United States on Twitter. As of this posting, it's raked in over 40,000 tweets.

Visit to the Capitol Hill Autonomous Zone where streets are now blocked by the community and @SeattleSPU is on scene cleaning up as much as possible. Cc: @FBISeattle no flames spotted but a few businesses damaged by tear gas and flash bangs pic.twitter.com/ntOIj5N9Qn
— jseattle (@jseattle) June 9, 2020


So. The name "CHAZ" is sticking. We've made a collection for it. It has a Wikipedia page.

Last night, the scene was calm. A version of, "If you're here to fuck shit up, GO HOME!" was often yelled on the mic at the ongoing teach-in area.

"If you see someone doing some bullshit, say something about them doing some bullshit," one speaker said, referring to people who may try to break into the East Precinct. "My body is fucked up right now, and I'll be damned if that shit is wasted," he continued.

Scouts stationed at the barricades defining CHAZ's six-block zone noted the night had been "easy" and "calm, as we like it." They have been quick to ask people if they need help. There were porta-potties, provided by the Seattle Department of Transportation, and designated smoking sections, provided by the people.

The crowd was energized to build connections. People spoke about investing in Black-owned banks, divesting from corporations, and prison reform. One speaker issued a warning about the American Legislative Exchange Council, "a group of usually white men from major corporations... who don't know our issues and make laws."

People reminded each other that they were ready to occupy the area for the long haul—until the city meets their evolving demands.

Currently, people are echoing Councilmember Kshama Sawant's call to turn the East Precinct into a community center for restorative justice. It's been declared. Chase Burns
A new development just before midnight on Tuesday sweetened the deal for any who wanted to stay overnight. A giant projector and sound system set up outside the precinct started to screen 13th, Ava DuVernay's documentary on mass incarceration. "If you have other ideas for documentaries, or anything informative people can watch, come up and let people know. Write it down on a piece of paper," a speaker said on the mic.

The crowd continued to grow into the evening as the group marching from City Hall joined.

I heard a rumor that American History X was playing next. There's still time to go down to CHAZ and make a suggestion.