Residents of CHAZ Respond to the President 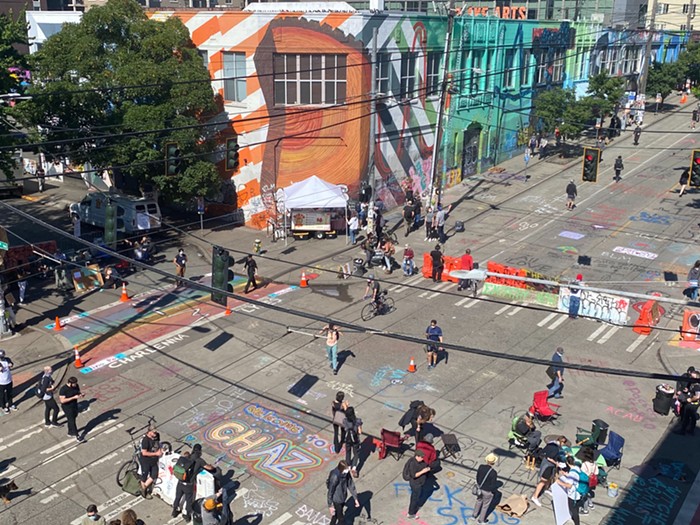 The Capitol Hill Autonomous Zone, or CHAZ, day 4. "I prefer the CHAZ," a resident says, "compared to the week and a half when cops in the neighborhood had their precious barrier set up about a block away from our apartment." Chase Burns
Our President thinks "ugly Anarchists" and "Domestic Terrorists" have taken over Capitol Hill. In case you somehow missed it, here are the tweets: 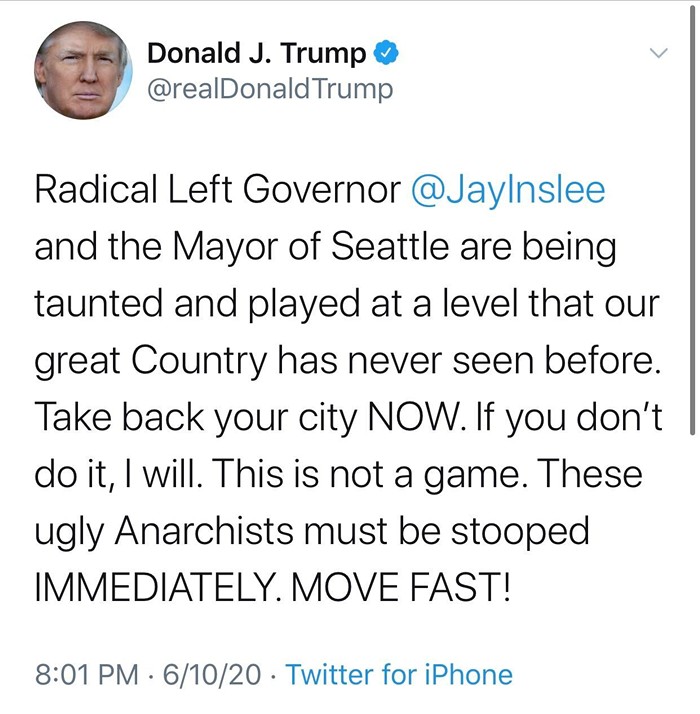 This tweet was taken down and replaced after Trump realized how to spell "stopped."

Trump's claims of "Domestic Terrorists" taking over the area is news to most residents, demonstrators, and journalists on the ground. As Rich Smith wrote, yesterday was an exceedingly chill day at the Capitol Hill Autonomous Zone. Demonstrators have been "emanating a lot of chill street fair energies" and setting up an outdoor cinema and an evolving teach-in outside the East Precinct. Some horrifying anarchists are even gardening inside Cal Anderson. "Chill" vibes aside, people are still relatively clear-eyed about the mission; demands are listed all over the CHAZ—on signs, buildings, streets, and barriers. A website is now live featuring demands and live cams.

But you don't have to just take our on-the-ground reporting to disprove Trump's "Domestic Terrorists" claim. We asked six residents who live in apartments within the six-block CHAZ radius how they're holding up. Here's what Scott, a resident who lives on Pine, had to say:

Really it’s been pretty great since the police de-escalated! I’ve been tear gassed in my apartment and on the street several times last week. I didn’t realize the mental burden of anxiety I had from the police holding a siege fortress across the street, amplified by the seemingly endless possibility of being tear gassed by the state *again* in my own home, until they finally relinquished control of the street to peaceful neighbors.

Since the de-escalation I’ve been able to help with trash pick up on the block, get lunch from businesses within the CHAZ boundaries, and try out my new bubble machine from my apartment without fear that any of these activities would involve an unnecessary interaction with the police.

Directly responding to the President’s tweets: There are anarchists on the block, it’d be tough to say there isn’t. The ones I’ve talked to seem to be taking the lead from BLM leaders to build the community within the Zone. There is more compassion and willingness to build better futures together than anything I’ve seen out of leadership in the White House in the last few years, and specifically out of Seattle’s City Hall in the last two weeks.

I think I’m politically to the left, pushed further to the left each night the police tear gassed and pepper sprayed me in my own neighborhood. The folks on the block in CHAZ are looking to find a better way to build community and find solutions to systemic problems without the need for racist militarization. They’re better neighbors than we had at 12th and Pine before the George Floyd Rebellion.

Another resident, who'd prefer to remain anonymous, agreed with Scott:

Coming from a Latin American country where there’s a lot of police brutality, we thought moving here would be different. Having the police turn our neighborhood into a violent zone and seeing black and brown neighbors being attacked by the police was re-traumatizing. Once the police left, things changed dramatically.

We were not asked to stay home. Not asked to show our ids to get into our apartment. We can approach protesters and ask questions about what’s going on and get information. We’ve witnessed protesters going to businesses and making sure they’re okay, communicating with them.

As of right now, this seems more peaceful for a person of color living in Capitol Hill.

Another resident disagreed about CHAZ's safety and called it a "distraction":

Most of the 200 people that live here are not being included in any conversations and feel scared, unsafe, and are leaving the area to stay elsewhere due to the unrest. People “running” the zone are also actively trying to spin the narrative away from the protests that worked to amplify desires of “police leave the area” and “stop killing black people” to a narrative that is now taking my community hostage with a list of demands to adopt socialism instead of the clearer messages that the protests against police were actually for.

As a black man and resident, I have felt both unsafe by police and the national guard militarizing my street, being just steps away from my door (which has direct access to the street level) and now I also feel unsafe by the attention this barricade is causing to attract alt-right white supremacist groups and people who identify with being anarchist (that was just one night ago, with them carrying guns right outside my door).

Another resident agreed, saying "I unequivocally support BLM, but I do not support 'CHAZ'" and:

I do feel the message is being lost. I am nervous to speak out.

And here's Maris, another permanent resident of CHAZ:

First, when I saw those tweets yesterday I laughed and sent them to my family group text and wrote "Sending love from the Autonomous Zone".

As to what the tweets actually say, it's hard for me to imagine what Trump taking back Capitol Hill would actually look like. If it's more cops in riot gear and National Guard, I think the people here proved that they know how to deal with all of those things. My stepmom pointed out that the tweets aren't for people who are already opposed to Trump or even the people here in Seattle; they're for the people who believe in his power. He just wants to prove that he's in control of everything that happens across the country and scare red states into not protesting and not working to defund the police, etc.

The strangest thing about the Autonomous Zone is that it seems like suddenly we're not in a pandemic anymore. Before the end of May, Cal Anderson Park was almost deserted when the sun wasn't out to the point where it was creepy. But now, it seems like a normal Capitol Hill summer street fair/music festival, but with more tents. On occupation, can you be "occupied" by the people who were already living in the neighborhood? And can you be "occupied" voluntarily? Can we get more Radical Left people in on this occupation?

Compared to the week and a half when cops in the neighborhood had their precious barrier set up about a block away from our apartment, and we couldn't sleep because we were sure that we were going to get woken up by flash bangs and some iteration of tear gas, I prefer the CHAZ.

And finally, from a resident who "lives on the Southwest side of CHAZ":

I can say that since SPD vacated the East Precinct everything has been entirely peaceful and the feeling in the air is optimism instead of fear. After living in the middle of a war zone for almost two weeks the creation of “CHAZ” has been a much needed change and step in the right direction. Every day the community leaders get more organized weather it be screening important films at night, creating a safety group, housing the neighborhood homeless, or holding community meetings where they discuss what they want and need.

I will say there are people in Cal Anderson who are camped out and are treating this like a picnic and not a movement that has meaning, but those who are up at the precinct are creating a community group that can really make change. I feel more safe in my home and more at peace with “CHAZ” around than I ever did with SPD being around.

How long will CHAZ stay up and running before SPD returns? That's still very much up in the air.