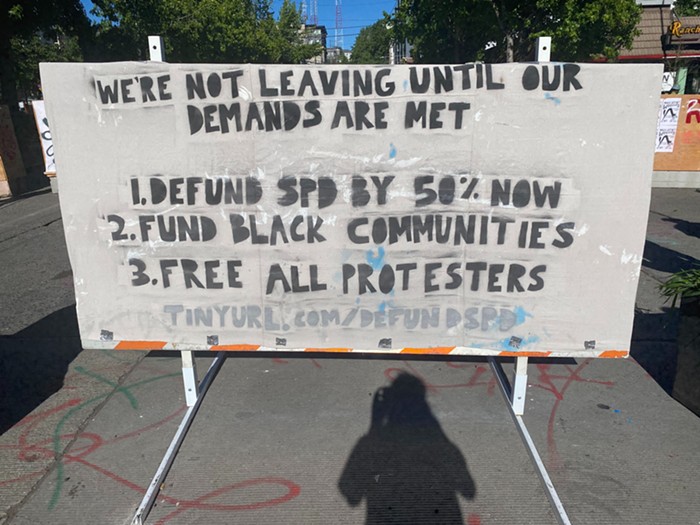 Pike Brewing co-founder Rose Ann Finkel passed away last week: Rose Ann was 73 and passed away after a battle with Myelodysplastic syndrome blood cancer. She was a luminary in Seattle's food and beverage industry. Last October, Lester Black interviewed Rose Ann and Charles Finkel for Pike Brewing's 30th anniversary here. "I think the beers that we are producing now are more exciting than they have ever been," Rose Ann said in that interview.

The red JUMP bike-shares are back, Seattle: This time around the block they're operated by Lime. Previously, the JUMP bikes were operated by Uber, but Lime acquired the bikes in May. That said, the bikes will still be rented through the Uber app in Seattle. Lime plans to add the bikes to its app "down the road," writes GeekWire. It's sorta confusing. 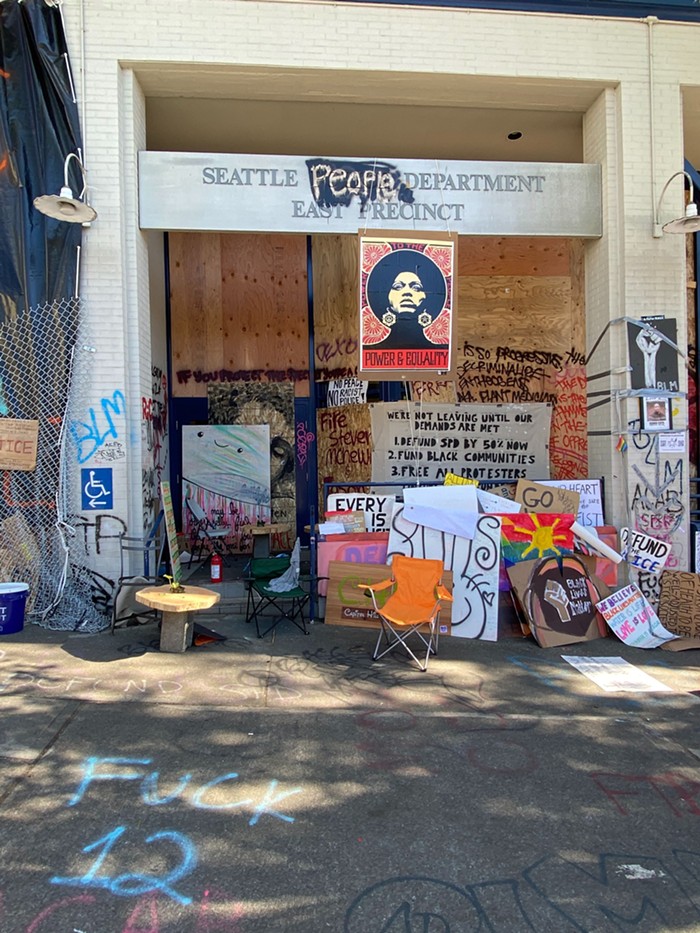 Here's what the East Precinct looked like as of 6 pm today. CB
The Stranger's Nathalie Graham was at Mayor Durkan's Monday afternoon press conference about CHOP, which experienced a weekend of shootings. Here's some of what Nathalie heard this afternoon about the Zone:

After three people were shot this weekend near the boundaries of the Capitol Hill Organized Protest (CHOP), Mayor Jenny Durkan announced that changes were coming. Without exactly saying it, Durkan called for the end of CHOP.

"It’s time for people to go home," Durkan said. "It’s time to restore Cal Anderson Park and Capitol Hill. The impacts on the businesses and residents and community are now too much."

In the span of 48 hours this past weekend, three people were shot in two shootings. One Black man who was only 19 years old was killed. The Seattle Police Department is currently investigating both incidents. However, the narrative that SPD is telling around the events is different from the one the medics on the ground said. SPD blamed a "hostile" crowd for the delay in getting to the scene of the crime.

Read all of her updates here.

There are still a lot of people in CHOP: Will the tents be swept away?

Durkan says HSD is doing "outreach" to people experiencing homelessness, which, again, sounds very much to me like the Navigation Team. She says "de-escalation teams" from the Black community are also coming in to talk people into leaving, somehow or other.
— Erica C. Barnett (@ericacbarnett) June 23, 2020

Lin-Manuel Miranda dropped the trailer for the Hamilton film: It comes out July 3 on Disney Plus. It's a filmed version of the Pulitzer Prize-winning musical.

Seattle City Council has repealed two loitering ordinances: One was Seattle's drug traffic loitering law, which let officers arrest a person on suspicion of selling drugs in public. The other allowed officers to arrest a suspected sex worker for loitering. The repeals have been widely celebrated by progressive groups.

Many ally organizations showed up to testify in favor of repealing these laws, and earlier today ACLU-WA sent a letter to Seattle City Council on this issue.
— ACLU of Washington (@ACLU_WA) June 22, 2020

Joel Schumacher, renowned slut and filmmaker, is dead at 80: Schumacher directed St. Elmo’s Fire, multiple Batman films, and The Lost Boys. He also once joked (?) that he slept with an estimated 20,000 or 30,000 people. When told that this estimate was "really amazing," Schumacher responded: "It’s not for a gay male, because it’s available." Still, that's up to, like, more than one person a day, every day, for 80 years...

Washington State Fair will host a six-act drive-in country concert series July 16-19: Seems like cars are one of the big winners of COVID-19. I think a lot about this Mudede quote: "If the world were not upside down, we would be as terrified of these 4000-pound machines as we are of the microscopic COVID-19."

Pray for Florida: So much for COVID-19 going away over the summer.


Unemployed people across India are turning to poaching endangered tigers and leopards: Poaching has become an unexpected consequence of the COVID-19 pandemic. As people have been left jobless, many have turned to poaching rare animals throughout Africa and Asia, reports AP. “It is risky to poach, but if pushed to the brink, some could think that these are risks worth taking,” said a wildlife biologist.

your blood thick as hell. Or that you may have to be on oxygen for the rest of your life. COVID is designed to kill. It is a highly intelligent virus and it attacks everything. We will run out of resources if we don’t continue to flatten the curve.

Top officials are expected to warn House lawmakers about the devastating COVID-19/flu cocktail the United States will face this fall on Tuesday. Their prepared testimony has already been released. In it, officials say they've developed a dual test for COVID-19 and the flu and have requested emergency authorization from the FDA for its use. “Current efforts are focused on further scaling up testing capabilities to guarantee that each state has the testing supplies and capabilities they need to reopen according to their own individual state plans,” reads part of the testimony.

TikTok of teenagers finding remains on Seattle beach from r/Seattle

Something to cheer you up: Two more Trump staff members have tested positive for coronavirus after the campaign's Saturday rally in Tulsa. More from the New York Times:

Six other members of the campaign’s advance team had tested positive for coronavirus before the rally, an alarming development that the campaign tried to downplay by saying that their tests were a small fraction of the “hundreds of tests performed” on staff members.

The Trump campaign forged ahead with the rally despite recommendations from local health officials to delay any mass indoor gathering until it was safer to bring large groups of people together.

Deeply upsetting: Today, a now-former general manager for Momiji instigated a fight in CHOP after calling a woman the n-word. Momiji quickly announced that the GM had been fired and that they will be making "a contribution to BLM."

Have been hanging around nearby after this occurred in #CHOP. Momiji just released a statement on Facebook saying they have fired the man and are making a donation to BLM. https://t.co/kd5QuiTYPu pic.twitter.com/JB6Aul88aq
— Lindsey "Member of the Media" Wasson (@lindseywasson) June 23, 2020