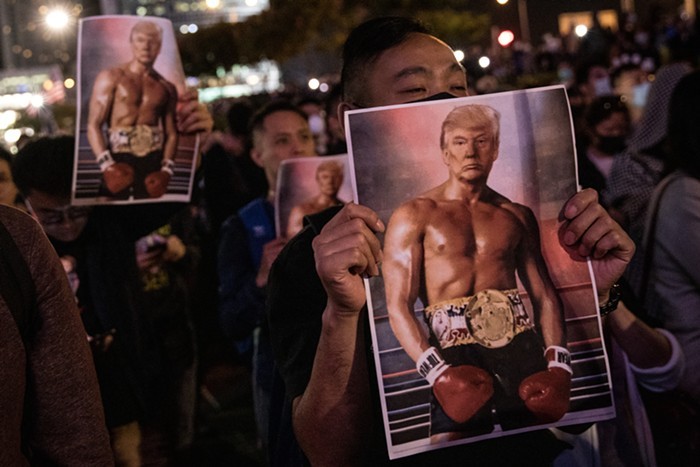 Hong Kong protesters holding up pictures of "swole Trump" during last year's pro-Democracy demonstrations. CHRIS MCGRATH/GETTY IMAGES
Dr. Anthony Fauci says the U.S. could begin reporting up to 100,000 new coronavirus cases a day: He made the statement at a Senate hearing this afternoon.

China's controversial national security law on Hong Kong was imposed on Tuesday: The largely secret and "sweeping" law "sets obedience to Beijing above the former British colony’s civil freedoms," describes the New York Times. Finally released to the public at midnight, the law creates new crimes for individuals who want to "split" Hong Kong from China, and allows life imprisonment for severe cases. While prosecution may not actually end up happening, the Times notes that "the sheer scope of the Hong Kong law may prove a deterrent."

Another thing that's "sweeping": Microsoft's new job training initiative. The tech giant announced today that they will be teaching digital skills to 25 million people this year via a multi-million dollar initiative. Here's partially how it works, via GeekWire:

A new LinkedIn dashboard will offer tracks like “Become a Software Developer” and “Become an IT administrator.” The “learning paths” will provide online training for free through March 2021 in each field. There will be opportunities to practice the skills in GitHub’s Learning Lab.

In addition to the free resources, Microsoft will offer low-cost certifications required to fill tech roles. The certifications are based on exams that determine a student’s skill in Microsoft technologies. They will be available for a discounted fee of $15 to anyone whose employment has been impacted by COVID-19. The exams ordinarily cost more than $100, according to Microsoft.

Find out more from GeekWire here.

Bumbershoot is canceled: Officially. They hope to be back in 2021. To be honest, I thought they'd already officially canceled.

A judge has temporarily stopped the publication of a tell-all book written by Donald Trump's niece: The temporary blocking is related to a confidentiality agreement connected to the estate of Trump's daddy, Fred. The book, to be published by Simon & Schuster, is titled Too Much and Never Enough: How My Family Created the World's Most Dangerous Man.

A round-up of some of today's Slog headlines:

Do you remember when those teens found a suitcase with a dead body near Alki Beach while making a TikTok? Police have identified the human remains. There were actually the remains of two bodies inside the suitcase, belonging to a 27-year-old male and a 36-year-old female. It remains an active homicide investigation, although "detectives say they do not believe this case is connected to any investigations in the Puget Sound area," notes KOMO.

Since I conjured vexillologists, it seems like a good time to rewatch this excellent Ted Talk from Roman Mars. Although the last time I watched this video I got a little too excited...

Bernie Sanders is calling on the United States to cut the US military budget by 10%: In an op-ed for The Guardian published today, he writes:

"Incredibly, after adjusting for inflation, we are now spending more on the military than we did during the height of the Cold War or during the wars in Vietnam and Korea. This extraordinary level of military spending comes at a time when the Department of Defense is the only agency of our federal government that has not been able to pass an independent audit, when defense contractors are making enormous profits while paying their CEOs exorbitant compensation packages, and when the so-called “War on Terror” will end up costing us some $6tn."

White House Press Secretary Kayleigh McEnany says Trump is the "most informed person on planet earth" about threats facing the US: She also said, "The President DOES read!" Sure, Kayleigh (I always read her last name as McEnemy).

The 16-year-old killed in the early Monday morning CHOP shooting has been identified: His name was Antonio Mays, Jr. A makeshift memorial has appeared at CHOP. Details about the shooting and details about Mays remain unclear.

Inslee was heckled offstage today while speaking in the Tri-Cities: I can only assume the hecklers are voting for Tim Eyman for Governor.

We're interviewing Inslee tomorrow for our Stranger Election Control Board endorsements: We probably won't heckle him out of the Zoom, but we'll see!