Ronette's wants to mix up Seattle's nightlife scene. Dave Segal
Steve Snere is best known for his wild antics onstage and on record for Seattle rock band These Arms Are Snakes and electro-agitators Crypts. When not shouting and stomping around the boards, he worked as a bartender. But he'd long joked about opening his own place, which he wanted to name after his dog, Ronette.

Then one day not so long ago while at breakfast with Ben Verellen—veteran Seattle musician and owner of Verellen Amps and Fremont's Bar House—a mutual friend mentioned to them that Drunky Two Shoes was for sale. “Ben got this look in his eyes and kind of pushed me into doing it,” Snere says in a phone interview. “I said, 'I can't do this.' He said, 'You can do it.'” Snere laughs at the scenario, but he is doing it, with help from three other owners: Verellen, Ele Sykes, and Paul Ohlhaut. Whoops, there it is—Ronette's Psychedelic Sock Hop. 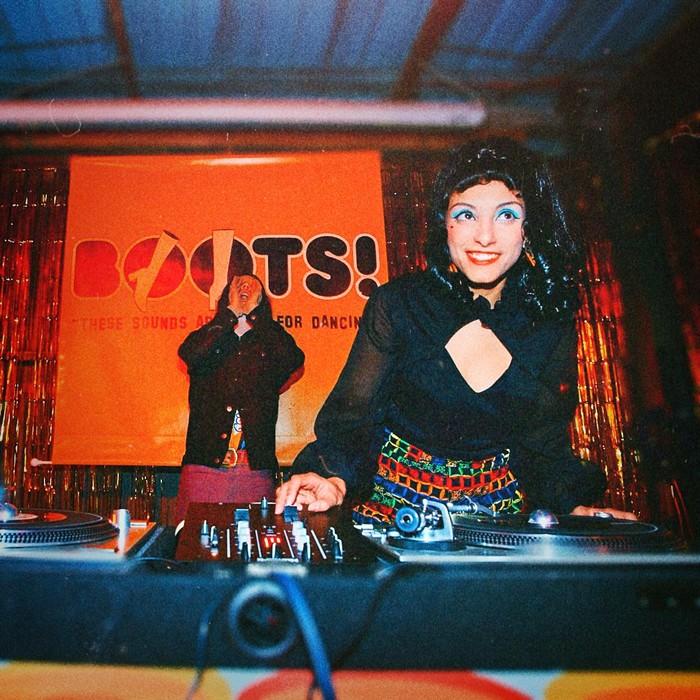 The new DJ party Boots brings 1960s go-go dancing happenings to Ronette's. Photo by David Wentworth
The time was right. Snere was in something of a holding pattern coming out of lockdown, just bartending and overseeing a compilation album of These Arms Are Snakes rarities and B-sides, Duct Tape & Shivering Crow, which local label Suicide Squeeze issued in April. (The group's reuniting to play five shows in June and July.) “I'm super-happy [Verellen] made me do it,” Snere admits. “It's helped me get my head on straight after the pandemic, you know?”

Snere and his partners hit the ground sprinting, rebuilding the space to conform to Snere's retro-cool vision: pink and black checkered floors, glittery walls, pink-curtained stage. The polished wood booths exude coziness and the performance space captures a Twin Peaks vibe—particularly, that of the David Lynch track “The Pink Room” from the Fire Walk With Me soundtrack. 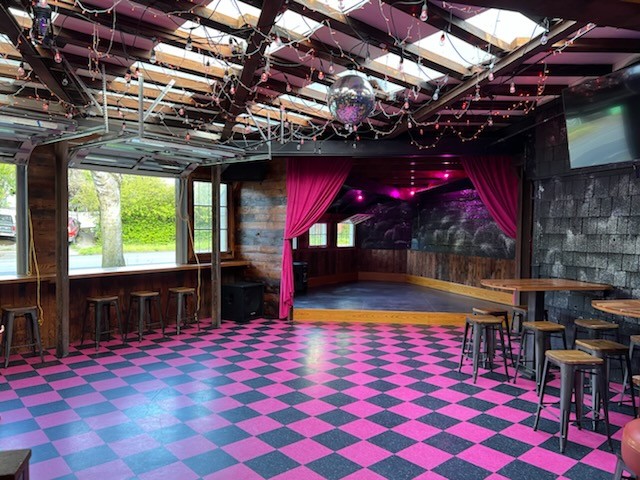 The stage. Courtesy Ronette's
They've only had control of the property for around two months, but the hard work's paid dividends so far. DJ Paco and Acid Tongue have played there so far, and the events calendar is filling up as Snere gets his bearings. (Follow Ronette's on Instagram to stay updated.) Plus, Mixtape Pasta chef Megan Barone has been running the Italian-cuisine kitchen; all the food's made in-house and includes several vegan options.

Snere says that he wants Ronette's to add diversity to Seattle's nightlife scene. “I grew up on '50s and '60s music. There are so many metal bands in town, and they can play here, but [I prefer] something a little more feminine and something a little different. We want this to be a cool, fun art space. I'm pretty open to anything—karaoke, drag shows. I just want to add to the culture here and for people to have a good time. Also, there's nothing really like this in the area where we're located [4105 Leary Way NW]. I feel like we need to do something more my speed.” 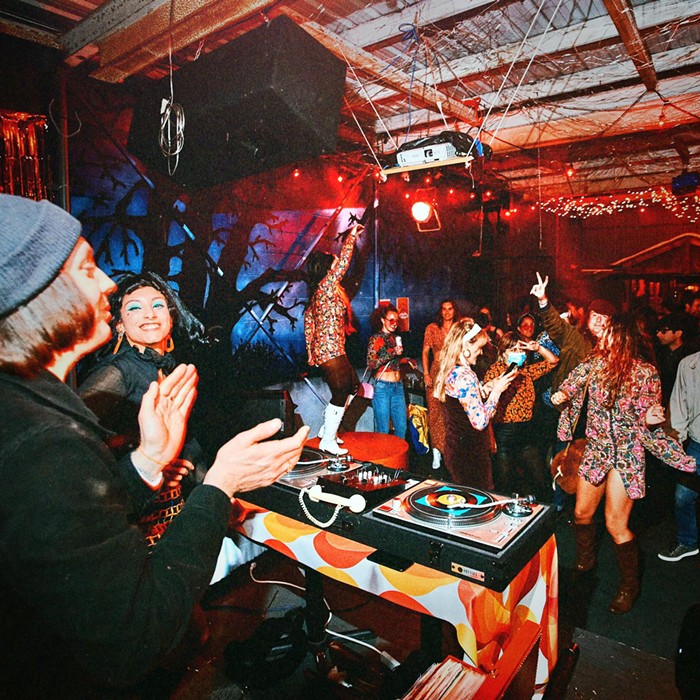 These Boots are made for trekkin', and that's just what they'll do. Photo by David Wentworth
One event that's totally Snere's speed is Boots, a new DJ party run by Sarah Savannah (aka Sarah Aoun) and Maxwell Edison (aka Ryan Novelli). Inspired by 1960s go-go dancing happenings, the era's soul, R&B, and garage-rock, and psychedelic clothing, Boots is a gung-ho preservation society headed by true believers with enough killer records to keep the flame burning eternally. After an initial gig at Bar House, Boots is walking on over to Ronette's for its May 13 debut.

Both DJs—who were born long after the '60s—had their lust for old music stoked by their fathers. Savannah's dad is from the Sahara desert in Algeria, but she grew up in a small French town called Besançon, which had no real rock scene. Mr. Aoun passed on his intense interest in blues and rock and roll—unusual for an Algerian—to his daughter, introducing her to Muddy Waters, Bo Diddley, and other crucial artists of their ilk.

When Savannah moved to Paris, she had another revelation. “I was exposed to this magical underground world that I had no idea was going on,” she says in an interview at her Seattle apartment, whose décor would get a nod of approval from Austin Powers. “I had an epiphany. I remember arriving at a party in an apartment with all these red-lipstick girls and rock-and-roll dudes, they were all in bands and there was rock and roll blasting. Oh my god, this is it! Where was I before that? This is me.”

Edison's earliest memories are of his father schooling him on the music they heard on the radio. “It started with the basics, like the Beatles, and I just always felt connected to it,” he says. “My whole life I've been locked into the music. As I got older, I got tired of the stuff I heard on the radio, so you start going down rabbit holes and searching for other stuff. What's different? What haven't I heard yet? What do I like? What's the sound that I'm into? I felt at home in the '60s, '70s, mid-century sounds. Then punk rock led me into obscurity and figuring out, well, I like stuff that's off the radar, so what were those bands listening to? And that brings you down into the '50s and '60s. I just knew this was my scene.”

Once Savannah moved to Seattle in November 2019, it was inevitable she would meet Edison, one of Seattle's best and busiest DJs; his current schedule includes Wig Out, Rave Up, and Get Happy at Screwdriver, Analog Tuesdays at Rob Roy, and Instant Party at Jupiter Bar (full disclosure: I DJ with him at the latter night).

Edison and Savannah bonded at an Instant Party set. “He was playing these 45s and I literally ran across the bar to him. We didn't know each other. And I said, 'Can we be friends? Are you the scene?'” she says, laughing. “It's funny how we found each other. [Boots has] been a dormant dream in both of us, and coming from different continents.” 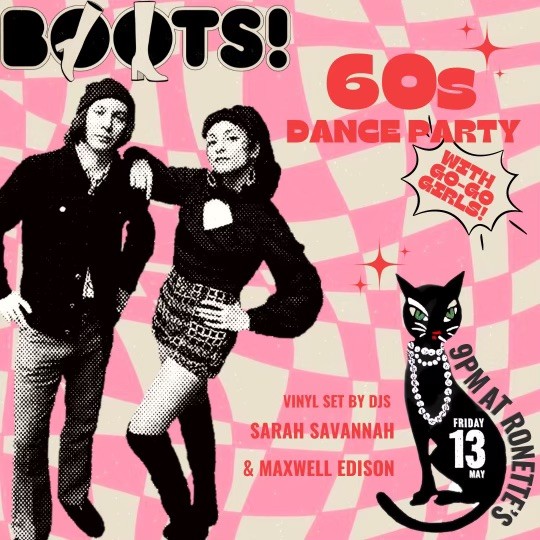 “I've wanted to create a '60s scene in Seattle,” Edison says. “Looking at old go-go shows, the footage you see from '60s TV, that's what I want. It was really interesting to have someone appreciating it and say, 'Oh my god, who are you?! This is what I've been looking for!'”

Most of the records Savannah and Edison play are obscure and valuable to collectors, but they will sometimes throw in familiar tunes or offbeat covers of same, such as Colombian band Los Yetis' Spanish version of the Rolling Stones' "Satisfaction" or Chuck Rio & the Originals' “Tequila” homage, “Margarita.”

Speaking of records, Edison exclusively plays 7-inch singles while Savannah supplements her 7s with a few compilation LPs, as some 45s are prohibitively expensive. “I will never be elitist that way,” she says. “We shouldn't forget the goal, which is to have a good time and enjoy the music and make people dance.” 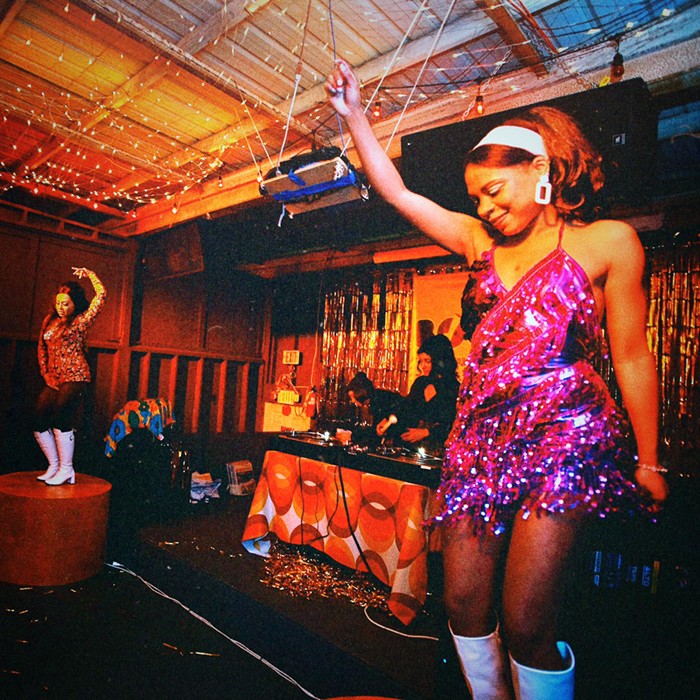 Photo by David Wentworth
Living in Europe afforded Savannah the pleasure of attending go-go-centric parties and festivals, which are still popular on the continent. She laments the dearth of such events in America; hence her determination to reignite the tradition. “What I love about it is that it's not a silo of just '60s music. And all these festivals have go-go dancers. They keep the tradition alive, and it's hilarious because it was clearly born in America, but it's not really a thing anymore here. In Europe, it passes on from one generation to the next. I have go-go dancer friends all over Europe who are my age or younger who start getting into it and somehow get hooked to that scene. They hunt '60s items and styles and decorate their house this way.”

Savannah puts her legs where her mouth is by dancing with King Khan & BBQ Show and she crossed off a bucket-list achievement by gyrating onstage with legendary garage-rockers the Seeds at Freakout Fest and at LA's Zebulon club. “There's something special about this form of dancing. I found this spark in other women, because it's so liberating and so fun. I love it because it's not choreographed; it's completely free. The whole job is to spread the vibes. It's to be so happy enjoying the music that your energy will leak onto people on the dance floor and they will experience the music even more intensely.”

That's precisely what happened at the first official Boots night at Bar House in April, which over 100 people attended. Social media clips from said extravaganza induced severe FOMO in at least one Stranger writer.

An Instagram post calling for go-go dancers attracted several eager participants, and their energy proved to be infectious. Edison and friend Pete Capponi (drummer for Steal Shit Do Drugs) built a couple of two-foot-high pedestals for the dancers, which literally elevates the party to another level. Former Stranger receptionist and Emerald City Soul Club DJ Mike Nipper reportedly wants to be Boots' first male go-go dancer. However, heads may not be ready for that radical move.

Discussing the crowd at the first Boots, Savannah says, “There were people who've been around for a long time who are sensitive to the music and the scene already. But there were all these clearly new people. They were younger. I want to bet that they don't listen to that music every day and they were having a blast. That's when you really know you did the job.”

“Somebody came through with boot-shaped helium balloons above their heads,” Edison says. “It was awesome. It wasn't anybody I knew. It was people coming from all walks. That's what was cool—everybody was consumed by the dancing.”

“We don't want to have this elitist circle,” Savannah concludes. “The whole point is to keep this music alive. The more random people who walk in and just stay because it's awesome, the happier I'll be.”

While Snere would love for Boots to set up permanent residence at Ronette's, Savannah and Edison crave change and hope to shift the concept into different contexts as time goes on. To paraphrase Nancy Sinatra, these Boots are made for trekkin', and that's just what they'll do. 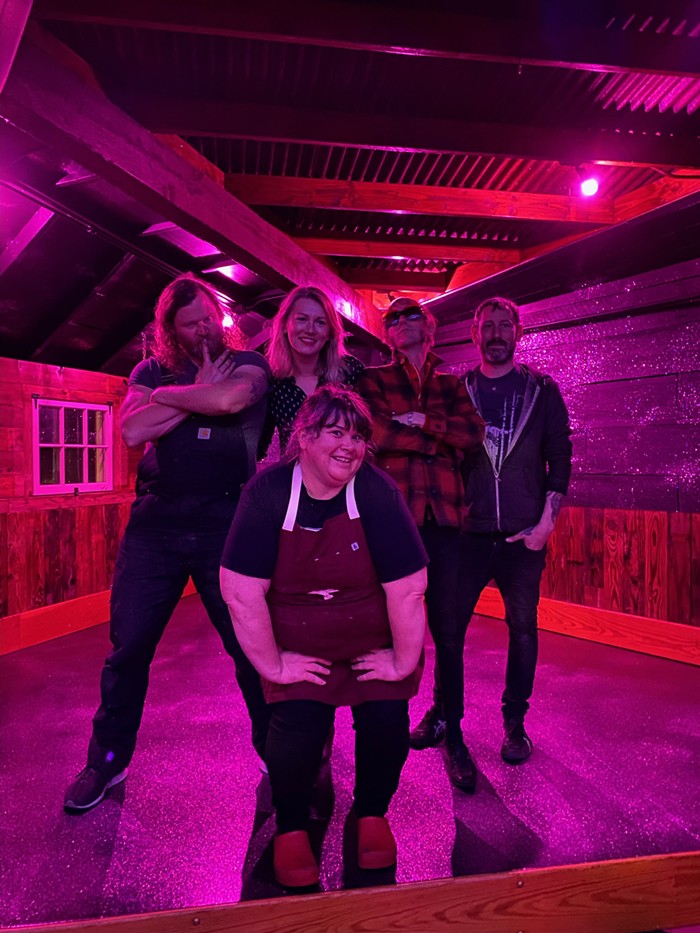