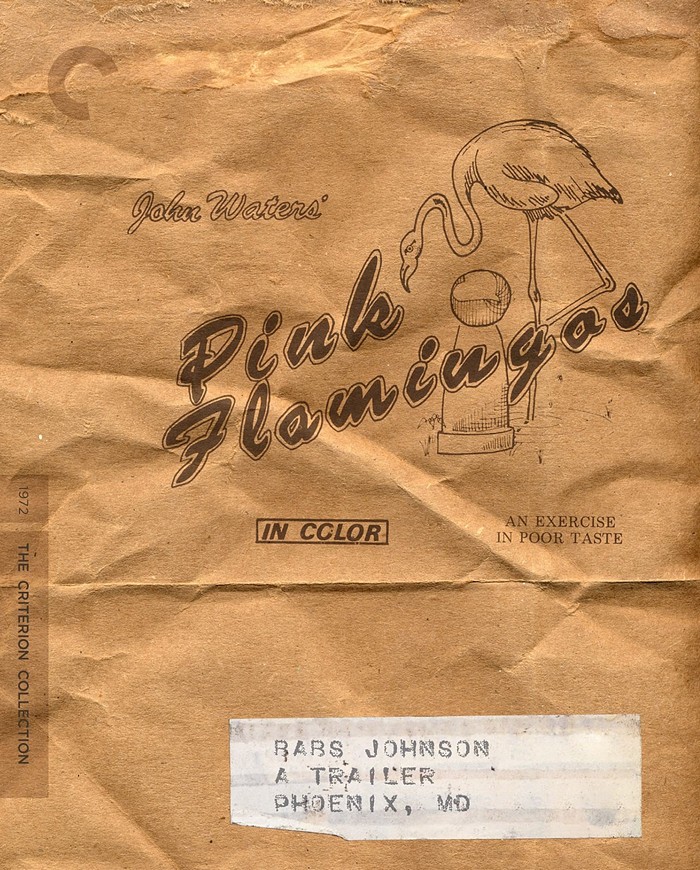 Sexy.
I guess it's funny I even thought Pink Flamingos would be available to stream, which is a testament to John Waters' current place in pop culture but an erasure of the film's smut. In one scene, Divine gets poppers and a pig's head for her birthday. They all do drugs, and then a performer flexes his prolapsed anus in rhythm to "Surfin' Bird." The police come, but Divine kills them with a meat cleaver and eats them. Everyone, even the murdered people, seems to be having fun. Things are burned, blowjobs are given, penises are cut off, people are convicted of "assholism," and, finally, after more murder, Divine concludes the rampage by finding a little dog, watching it shit, and eating its shit. For a gay kid who grew up mouthy, femme, and poor, that shit-eating grin gave me permission to relish in the freedom of being a reject.

And here's some good news for rejects: Criterion releases a blu-ray of Pink Flamingos during Pride month this year, complete with a 4K digital restoration, a feature-length documentary on the film, new conversations and audio commentaries, deleted scenes (!), and a funny cover. It may pop up on the Criterion Channel sometime after this release, but don't expect it to get indie theatrical screenings: word among programmers is that "legal issues" surrounding Pink Flamingos are holding up theatrical releases in the US. (I wonder if it has something to do with that anus and "Surfin' Bird"? Just spitballing here!) CHASE BURNS

This dress is killer. Toute Une Nuit
Chantal Akerman's Toute une nuit (All Night Long in English) is pure summer. The air is thick, the asphalt is warm, and everyone is a little sweaty (and horny). Lovers pace inside and outside homes and restaurants, exchanging glances or a quick sentence, but mostly just eye-fucking. You see, the film is essentially without dialogue, instead focusing on the comings-and-goings of Brussels during one summer night. The dozens—yes, literally—of characters hardly ever speak but certainly have a terrible time getting any wink of sleep. Instead they dance in empty bars together or sit alone in their apartment. I would say that Toute une nuit is not really even a movie, rather, a visual poem of love and loneliness. There are times that I found the format really worked—capturing the small moments between two people and weaving them into the fabric of a town (and thus the world). But mostly, I found the film difficult to emotionally latch onto. Still beautiful, though. JAS KEIMIG
Available for rental on DVD at Scarecrow Video.
📺 MADE FOR TV 📺
9 TO 5
US, ABC, 1982-1988, 30 min episodes, Created by Micheal S. Baser & Kim Weiskopf 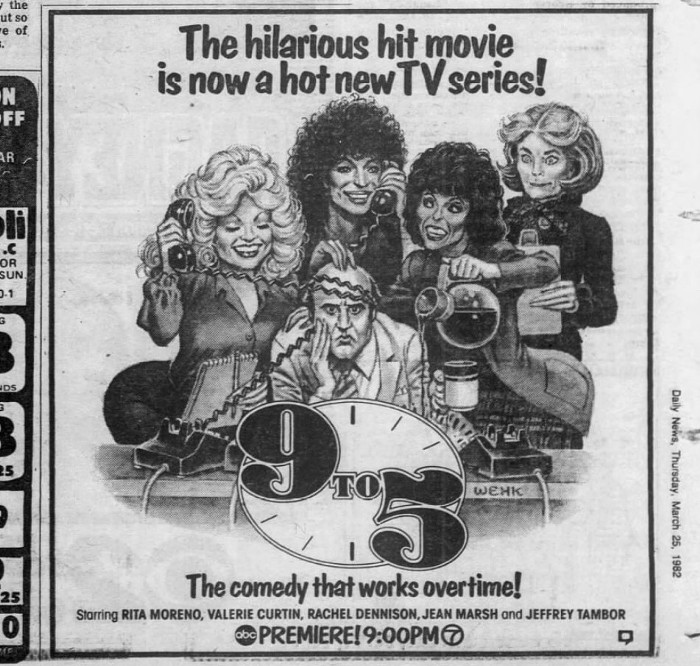 There has never been a more “what are YOU doing here” TV show than 9 to 5, a zombie of a sitcom that stuttered its way through the ‘80s on the fumes of the hit 1980 film starring Dolly Parton, Jane Fonda, and Lily Tomlin. Fans hoping for more of the fun, feminist mayhem of the original will be disappointed: By the time the movie was adapted into a show, the original cast had the good sense to flee, with the exception of Jane’s name appearing in the opening credits as executive producer (but even that wouldn’t last).

The cast replacements are bananas, particularly because actors kept coming and going over the years. It began with the lead roles ably filled by Rita Moreno (typecast as the fiery Latina yet again), Valerie Curtin (cousin of SNL conehead Jane Curtin), and Rachel Dennison (Dolly Parton’s real-life sister). The malicious boss, played by Dabney Coleman in the film, is now bumbling Jeffrey Tambor (whom you know from Arrested Development, Transparent, and making Jessica Walter cry among other unforgivable acts).

But the show would soon earn a reputation for its revolving-door casting. An ill-advised revamp replaced Moreno with All in the Family’s Sally Struthers, who does as much as one possibly could with the material she was handed; Curtin was replaced by Leah Ayres, one of those actresses you recognize from a billion different guest roles; and Tambor was replaced by Peter Bonerz, yes that’s his real name, he was the dentist on The Bob Newhart Show and directed a dizzying amount of television including Murphy Brown, Friends, and the failed pilot for Elvira’s sitcom. Also intermittently present are Jean Marsh (you may know her from Upstairs, Downstairs but I love her for playing the evil queen Bavmorda in Willow) and Herb Edelman (Stan Zbornak from The Golden Girls).

Initially popular, the show quickly plummeted in ratings to arrive at a third-season cancellation — but even that it wasn’t a painless death, as one of the great mysteries of television is why the show was subsequently resurrected for 52 more episodes (!!!) in first-run syndication, notably on Ted Turner’s indie Georgia broadcaster that eventually became TBS. The comedy is tepid throughout the show’s run, but for TV history weirdos like you and me, its one great pleasure is imagining the fun backstage conversations that must’ve taken place between so many entertainment icons while they were waiting for the checks to clear. MATT BAUME

The more I thought about this, the more fucked up about it I got. JK
Carol stuck in my mind long after I finished watching Safe. Played by a virtuosic Julianne Moore, Carol is dreadfully conscious about not taking up too much space. She barely uses her vocal chords when she speaks, can hardly make eye contact with anyone, and often inhabits the big empty rooms of her big empty home completely alone. She's profoundly isolated in her life as a homemaker. And when she begins to hyperventilate and get nosebleeds out of nowhere, her world gets even smaller as her (male) doctor and husband sniff with disbelief at her condition.

In this illness, though, she begins to form a new identity. Believing that she has "multiple chemical sensitivity," a New Age-y allergy to the chemicals that compose modern life, she seeks refuge and community at Wrenwood, a center for people with her condition led by the suspicious guru, Peter (Peter Friedman). Safe isn't necessarily interested in whether this disease Carol believes she has is actually real—emotionally and physically, the things that are happening to her are true. Rather, director Todd Haynes is really interested in the order that people seek in the random chaos of sickness, and how predatory self-help culture often turns the culpability of illness back onto the patients themselves. And it spookily reminded me of the early days of the pandemic, where every cough or headache or sniffle could be a sign of the plague.

The film premiered at Sundance the same year as Harmony Korine's Kids, the buzziest movie at the time. Safe couldn't be more opposite—slow, deliberate, thoughtful. But I think its questions and ideas are just as unnerving and sinister, and certainly more applicable in this moment when "self care" talk reigns supreme. And the stickiness of Carol comes from her constantly asking how can I make myself better? It's a familiar question that can be answered a thousand different ways. Carol could be any of us when put in the right situation. JAS KEIMIG

Available for rental on DVD at Scarecrow Video, Seattle Public Library, and Netflix DVD. You can also rent it on Prime Video.