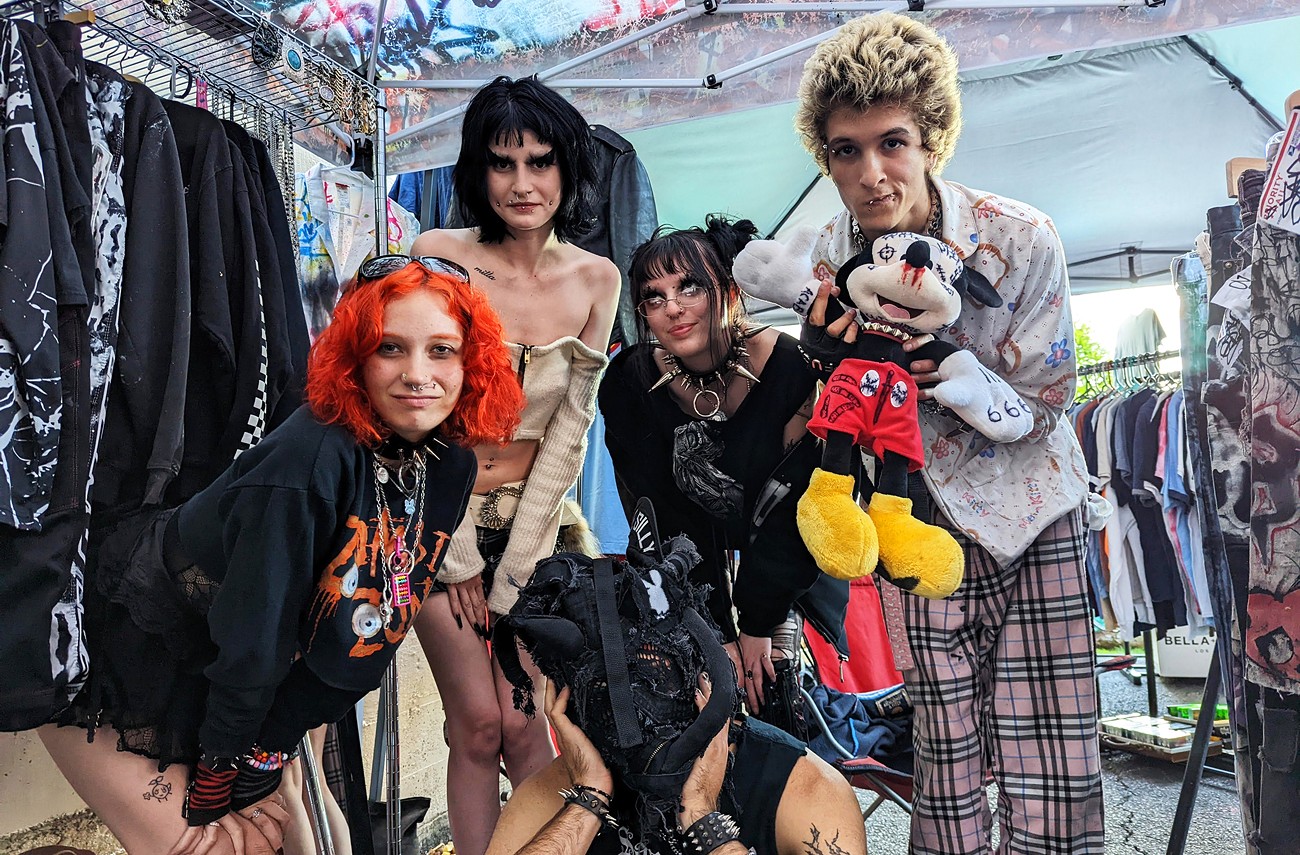 (FILM) Die Hard. Scrooged. National Lampoon's Christmas Vacation. The Gingerdead Man starring Gary Busey. They're all very good Christmas movies! But my all-time favorite, the one holiday film that wins out year after year, is The Muppet Christmas Carol. The classic tale is narrated by Gonzo and (the wildly underappreciated) Rizzo the Rat, with Kermit as the earnest Bob Cratchit and Michael Caine as the grumpy Ebenezer Scrooge. But to really appreciate the magic of the movie, first read this fascinating Vulture interview with songwriter Paul Williams. The Muppet Christmas Carol was the first Muppet movie made after Jim Henson died in 1990 and it's also first movie Williams scored after getting sober, so all the heartfelt moments about appreciating life and the people you love in songs like "It Feels Like Christmas" and "Thankful Heart" vibrate with genuine love, grief, and gratitude. Good luck not sobbing your eyeballs out now that you know that, sorry! Wednesday night at 7 pm is your last chance to see it in the theater at SIFF Uptown this season. Get there at least 30 minutes early for a Muppets-related pre-show special! (SIFF Cinema Uptown, 511 Queen Anne Ave N, 7 pm, $13-$14) MEGAN SELING

(SHOPPING) Have you waited until the very last minute to get gifts for your loved ones? Are you, like, kind of getting anxious about it? Is your name Jas Keimig!?! (Joking...) In any case, Punk Rock Flea Market is back once again in Seattle—for the first time in three years!!!—to save your foot-draggin' self with cool-ass wares from cool-ass vendors to gift to the people you love. See a list of vendors here. The good folks running PRFM got hooked up with the old Bartell Drugs space right on Third Avenue and Union downtown, so it's a super easy place to commute to. There will be over 200 vendors tabling booths with different lineups on each of the four-day market. You can also look forward to booze, music, and excellent vibes. Plus, entry is only one buck. Go forth and shop away. (Third and Union, 1402 Union St, open Dec 15-16 3 pm-9 pm and Dec 17-18 noon-9 pm) JAS KEIMIG 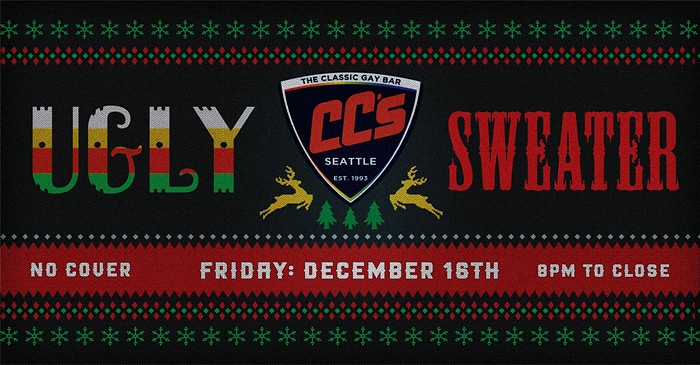 (HOLIDAYS) You’ve got a nice wide range of apparel-themed parties to attend this weekend, starting with an ugly-sweater party at CC’s on Friday. Wear your ugliest holiday apparel to mix and mingle, and after an hour or two, soak the wool with sweat so pungent that pigs will be lining up to bury their snouts in your pits. Or, if you’re looking for something a little more ventilated, the Lumber Yard in White Center (yes, they’ve re-opened!) is throwing a union-suit party the same night. Button up your old-timey underwear and leave the drop-seat accessible. The stripping-down of Christmas continues Saturday night back on Capitol Hill, when CC’s throws its annual Funderwear party. No cover means the doors are wide open to any fan of sexy underthings, and there may be a Santa or two on-hand to perform package inspections. The weather’s getting cold, but fortunately, there’s plenty of time to share body heat with a friend. (The Ugly Sweater and Funderwear parties are at CC's Seattle, 1701 E Olive Way, Fri and Sat, respectively; Underwear Night: Union Suits is at the Lumber Yard, 9619 16th Ave SW, Sat) MATT BAUME

sunking and Evan Shay at the Goodbye Look Club

(MUSIC) For the past several months, pop-up series the Goodbye Look has taken over certain nights at Queen Anne's Bad Bar, presenting their excellent curation of forward-thinking contemporary jazz and jazz-adjacent acts to Seattle crowds. The "pop-up" part is only temporary—the folks behind the project are currently searching for a permanent spot. Until then, the Goodbye Look is bringing two excellent experimental acts to Bad Bar's stage on Saturday. The first is Seattle-based sunking, a collaborative duo composed of keyboardist/guitarist Antoine "Sous Chef" Martel and drummer Rob "Bobbygrooves" Granfelt. Our own Dave Segal said the group "flit[s] among genres such as hiphop, jazz, and shoegaze rock while messing with the DNAs of each style they address," and their latest release, Smug, embodies that sense of fluidity. Also joining them onstage is Montreal-via-Seattle's Evan Shay, a saxophonist and producer who melds together jazz, hiphop, and ambient music to compose emotional soundscapes that could easily play over a gritty neo-noir. (Bad Bar, 819 Fifth Ave N, 8:30 pm, $15) JAS KEIMIG

(PARTY) Get out your dancing shoes and (ethically sourced) furs—it's gala time. Specifically, on Saturday it's the Museum of Museums Gala, a time to celebrate the artists and exhibitions the First Hill art space hosted over the past year. This year's theme is Out of This World, and organizers are encouraging people to think "space, planets, astrology, stars, and aliens" for their outfits. Gala attendees can also expect to see performances from ARCHIE (fresh off tour supporting Alaska Thunderfuck!) as well as DJ sets from La Mala Noche and Funfetti (aka former Stranger writer Emily Nokes), and an art installation from Izzy Phantom. Bring cash for the cash bar and someone you think is cute! (Museum of Museums, 900 Boylston Ave, 8 pm, $50/free for members) JAS KEIMIG

(HOLIDAYS) EverOut has a big list of where to celebrate Hanukkah in Seattle, from takeout latkes to giant menorah lightings, here!

(SPORTS) I don't want to jinx anything, it's still very early in the hockey season, but... the Kraken are looking good this year? They're second in the Pacific Division, just behind the Golden Knights with three games in hand, and newbie Matty Beniers is the top rookie in the league with 23 points. It's a good time to hop on Seattle's hockey bandwagon! And new on the scene is Rough & Tumble, a sports bar in Ballard that prioritizes women's sports! So here's what you do: The Kraken play the Winnipeg Jets at 5 pm on Sunday and Rough & Tumble promises to play Kraken, Seahawks, and Sounders games, too. But get there early, because at 2 pm there are two Premier Hockey Federation games. Women's hockey, my dudes! The Boston Pride (who are first in the league) take on the Connecticut Whale, and the Montreal Force play the Minnesota Whitecaps. (Rough & Tumble, 5309 22nd Ave NW, open daily) MEGAN SELING

Look at Some Lights

(HOLIDAYS) We get eight, maybe nine hours of daylight these days, if we're lucky. Before you're starting to feel like one of those eyeless, hairless moles that lives underground and doesn't need to feel the warmth of the sun to survive, get your ass to the nearest holiday light display and let the warm glow blast the seasonal affective disorder right out of your retinas. It's free to wander around the field of light sculptures in Westlake Park, and WildLanterns—dozens of glowing sculptures shaped like your favorite wild animals—is shining at Woodland Park Zoo through January 22. For something just as twinkly but indoors (and with fewer kids to contend with), head to the Bait Shop on Capitol Hill. The bar is festooned with tons of lights and decorations and every hour on the hour they all flash and blink and dance to music while you sit back and enjoy a frozen hot chocolate and some fish and chips. (EverOut has a complete list of holiday light displays here) MEGAN SELING

(FOOD) Everything in the new ʔálʔal Café, which opened on the first floor of Chief Seattle Club last month, is a feast for the eyes. I know that's corny to say, but it's true! On one wall is a striking mural by Native American artist Roger Fernandes. Another wall is a dedicated retail space, filled with Indigenous foods, cookbooks, and other goods, including tea and hot sauce from Sakari Farms, pancake mix and wild rice from Red Lake Nation Foods, and eye-catching ceramic tumblers from Eighth Generation. Look up and you'll see a school of glass fish made by Dan Friday hanging from the ceiling, flowing with soft, smooth curves to look as though they're making their way upstream. But the most surprising delight at ʔálʔal Café is the yogurt parfait. This is not just any yogurt parfait! Creamy yogurt is layered with Wojape, a deep purple Dakóta berry sauce that has been lightly infused with sage. On top sits a colorful arrangement of edible flower petals. They're not just for decoration! Mix those pretty petals into the yogurt! And grab a cup of Macrina granola for an extra $1.50 and throw that in there, too. It all comes together to make a sweet, delicately earthy, floral-flavored masterpiece and it's the perfect breakfast to bring some brightness and beauty to these cold, cloudy days. (ʔálʔal Café, 122 Second Ave S, open Tues-Fri) MEGAN SELING 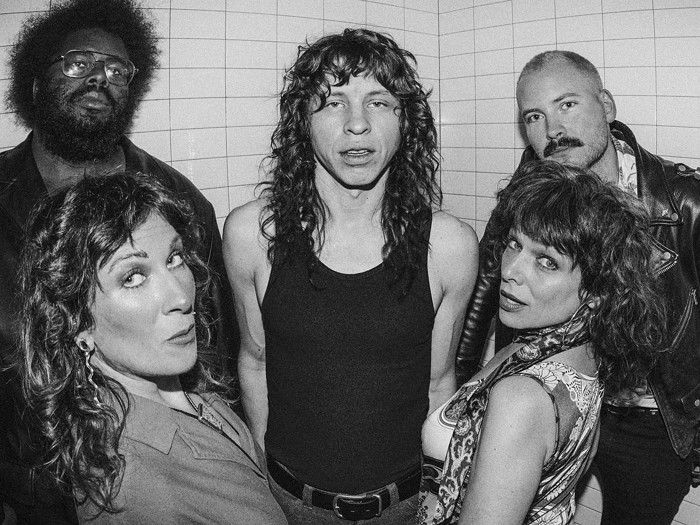 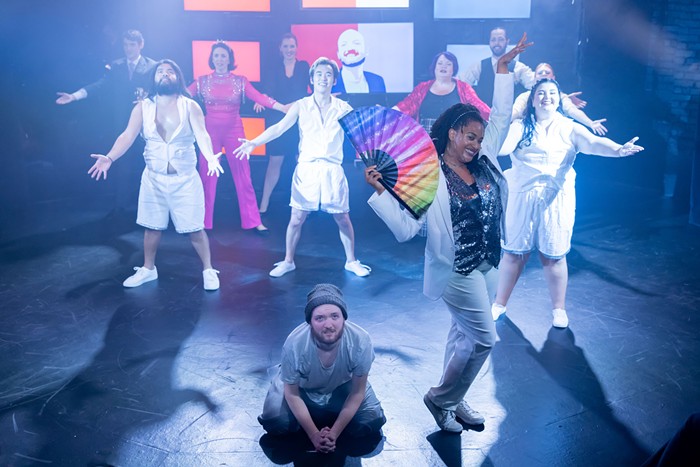