That's not even mentioning the parrot, the cockatoo, the horse, the fish, and the humans who love them. 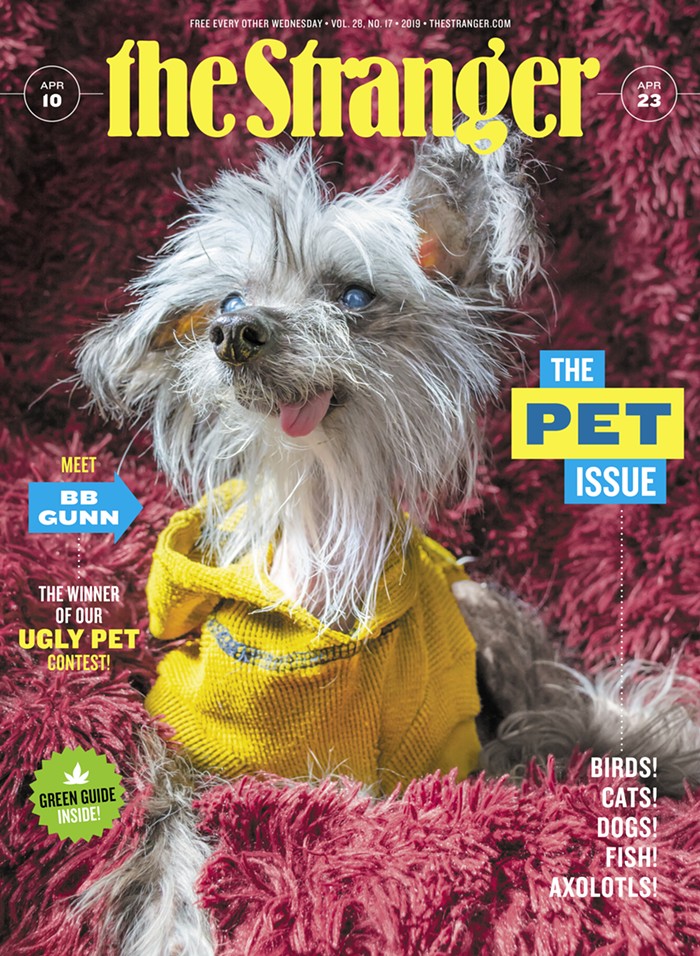 Pets are banned from The Stranger's office, due to a written agreement with our landlord. But Lester Black got to visit an office in Georgetown that has some 300 dogs walking around at any given time.

Nathalie Graham, who also wishes we didn't have an office ban on furry friends, recently got a cat from a shelter in the U-District, and it has been yowling nonstop. Turns out, the cat is in heat. (Nathalie may wish she could bring Juno to the office, but the rest of us are sure happy she can't.) What's it like living with a cat in heat? Find out here.

Our Ugly Pet Contest is widely beloved (except by the region's Shiba Inus), but the creature that won over the hearts of certain editors here, an amphibian named Phil, didn't prevail in the all-office vote. Democracy can be a heartbreaker. Leilani Polk profiles Phil the axolotl.

We had many wonderful ugly/cute entries to our Ugly Pet Contest. We had to make some hard choices, and you can meet the winners here.

Ever wonder why dogs are cute? Katie Herzog looks at the evolutionary reasons.

Electronic musician Blevin Blectum has two birds she lives with, a cockatoo and a parrot. Hilariously, they're both named Kiki. Dave Segal met them in Wallingford the other day. Read about it here.

Having a fish is harder than it looks, or at least it was for Rich Smith, whose tale of a fish named Poland is a doozy.

Ever wonder what happens to a dog that eats a bunch of weed? Wonder no more.

And finally, want to know what events in Seattle are coming up for pet owners and animal lovers alike? Find out here.