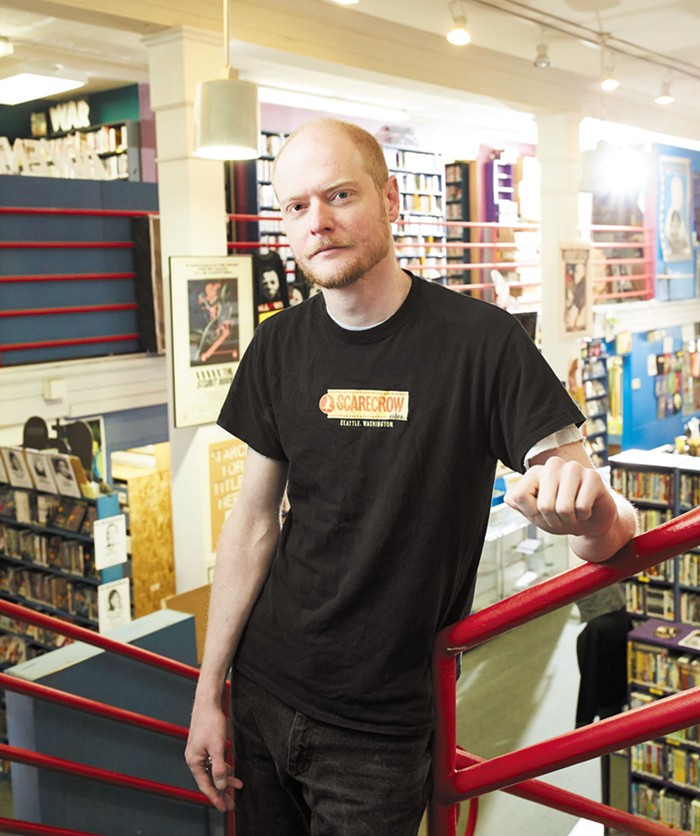 You can find one of the world's largest film collections at Scarecrow Video. Behind the scenes, you can also find longtime staffer Matt Lynch. He's the store's digital front end, responsible for running social media, answering e-mails, and promoting and running events. He also has a "bottomless appetite" for films, casually watching between 500 and 600 per year.

In addition to inhaling movies, Lynch also reviews them. Formerly a critic for The Stranger, he currently shares his thoughts on Letterboxd, an IMDb-meets-Yelp-like social-media platform. A cursory look at his profile gives you a sense of what he likes—spaghetti westerns, neo-noir, sci-fi, war epics. "But my real passions are for exploitation films from the 1960s to '80s, and I also have a serious love of big-budget Hollywood action films," he says.

Scarecrow may never beat the convenience of instantaneous movie-viewing, Lynch admits, but that's not really Scarecrow's purpose. "Some computer can look at what you watched and offer some vaguely similar thing," Lynch says. "Or you can come to Scarecrow and find something you really want or, better yet, never even knew you needed."

We asked him what movies we don't yet know we need, among other questions.

What is your favorite film that takes place in the Pacific Northwest?

Maybe I can tell you about the movie that made me want to move out here. Weirdly, it's the 2002 remake of The Ring. Parts of it were shot here in Seattle and the rest all around the area. It's a horror movie, but for some reason I've always found the dreary, waterlogged imagery strangely warm and comforting—all those raindrop-flecked windows really do it for me. I was actually visiting Seattle when it came out in theaters, and I saw it over at the Guild 45th. I remember thinking that I never wanted to leave and go back home.

Does format influence your viewing experience?

Nothing beats a theatrical experience, but I'm accustomed to seeking out some pretty obscure stuff, and oftentimes that means compromising on presentation and quality simply because something is super scarce. I have never and probably would never watch a movie on my phone. That just seems like a willful disregard for what you're watching, like eating convenience-store beef jerky just to stay alive until a proper meal comes along.

Scarecrow's "Rental by Approval" collection requires big dollar deposits. Which of that selection is really worth saving up for?

I'd have to go with a little-known, super-low-budget action movie from 1994 called Parole Violators. It's about an ex-cop who hosts an America's Most Wanted/To Catch a Predator–style reality show who goes after a gang of child-abducting bikers. Completely nuts. I've actually had the good fortune to put this in front of a couple of audiences, and it always melts everyone's faces right off.

What's your favorite corner or genre in the store that gets forgotten?

What is the best movie to watch when you're trying to video-rental-and-chill with someone?

Either Vertigo or In the Mood for Love—60 percent of the time it works every time.

What's the next new release that you're beyond excited for?

On home video, there's an amazing box set coming out in April called Love + Anarchism, a collection of films from the 1960s by a Japanese filmmaker named Kiju Yoshida. In theaters, I can't wait for Let the Corpses Tan, the new film from Belgian filmmakers Hélène Cattet and Bruno Forzani. Oh, and I have a real soft spot for the so-called cinema of Michael Bay, so the new Transformers looks like crack to me.

Look at his profile here.

Scarecrow Project, Winner of the 2015 Stranger Genius Award in Film