How to Get Married on the Spur of the Moment

You Have No Money? You Don't Want to Make a Big Fuss? And You Love Gummy Bears? Then This Is Easy. 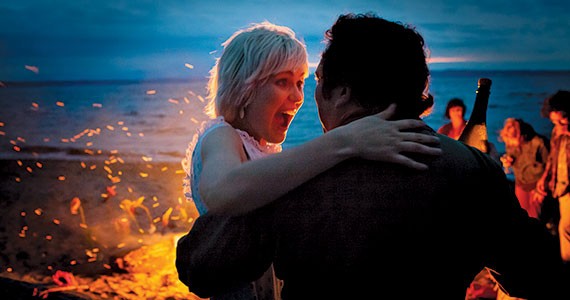 Jim Newberry
Just fucking do it.

Marriage was not one of my goals for 2011, or any year, really. In fact, I didn't even suspect I was going to get married until four days before my wedding. What happened was, I was preparing for a lengthy band tour and dreading leaving the fantastic human I'd been dating for three months. We joked about marriage, we got serious about marriage, and then during dinner one night, we decided one thing was for certain: We could not wait any longer. We went to the courthouse the very next day, where we filled out a marriage-license application on a desk decorated with a lopsided heart.

Don't worry too much about what other people do.

Maybe you'd like to pause and think about that number I hit you with back there: three. Three-month courtship. I KNOW. But here's what we know about marriage: People get divorced. People whose engagement lasted for 30 years. People who have made children with each other. People who have all the money, none of the money, all the good and/or bad intentions in the world. It's a total crapshoot. There is no formula, and the more I thought about the crazy decision I was about to make, the less crazy it seemed. We loved each other more than we loved other people, we could see a future together, and that future looked fucking awesome. We were going to bottle that gooey puppy love commonly found in the first few months of courtship and force it to stay, damnit, with a $64 piece of paper that would make it difficult to simply walk away.

Seattle is not Las Vegas, thank you very much, and you must patiently wait three days after your initial paperwork to make your marriage official with some sort of ceremony. While we waited, we talked about the pros and cons of the decision we were making, and we made sure we agreed on the important things (toothpaste brands, not having children, peanut butter toast with a layer of butter underneath). But mostly we just spent those three days grinning like idiots, amazed that no one grilled us at the courthouse or asked us questions like "Do you even live together?" (We didn't.)

Get your outfit at Red Light if you want.

The big day fell on the highly desirable Thursday. I worked until around 4 p.m., when I decided I should buy a wedding dress instead of wearing something I already had. I scurried to Red Light and bought the first three options that sort of fit (I ended up wearing the only one that didn't look like a Heaven's Gate robe and/or have sweat stains). At some point, I realized I hadn't even showered, but I was already running late and so I just wore more lipstick than usual—I'd say I was probably hitting a 5 or 6 out of 10 on the "how good can you possibly look" scale.

Do it on a beach at sunset.

The wedding party—my sister and six close friends—arrived at Golden Gardens, where we set up a table of cheese, crackers, gummy bears, M&Ms, and a spongy chocolate cake from a bakery in the International District. We built a bonfire, threw flowers all over the the sand, and drank bottles of champagne while the sun set. No one was stressed out, and even though that morning I'd received the text message "Are you sure this penguin is forever?" along with Alanis Morissette's "Ironic" music video, the overall concern levels were surprisingly low, and our closest friends supported us wholeheartedly.

Outside of the people who had been there, I kept my fast-and- furious wedding a secret for a little while, because I didn't want to feel bad or spend 40 minutes on the phone with everyone I knew. Besides, being on tour is the opposite of having privacy, and "finding the right time" to convince acquaintances that I wasn't pregnant or in trouble with the law just wasn't happening. I had saved everyone so much money by not inviting them to my wedding, anyway! I wanted to relish in my fun decision without cold, hard divorce-rate PowerPoints from skeptical friends! The only people I really fretted about were my parents. I knew they'd be surprised but ultimately understand—they themselves eloped more than 30 years ago, so they couldn't be that mad. I finally called them from a parking lot in Philadelphia and, yes, there was some confusion. But more than that, they were just glad I was happy.

Don't expect a golden plaque to come in the mail.

After our officiant/roommate (who ordained herself online two days prior via the internet) married us with a sweet speech (that I think included the words "Facebook messaging," which in retrospect is only a little mortifying), we signed the necessary paperwork and the envelope was sent off to the courthouse later that night. For something so important, you would think there would be some kind of confirmation from the city, but no. No golden plaque comes in the mail, no e-mail notification of the life-changing union you just agreed to—not even a traffic-violation-style postcard to put on your fridge or keep in your records! Shortly after our first wedding anniversary, I did type our names into the record-keeping software on the city website. And thereafter on a public page (very close to the page that keeps track of my shameful amount of parking tickets) was proof that I was, in fact, married. Just like that. It's one of the best decisions I have ever made, and I didn't even have to register for a fondue set to prove it.

Comments 10
Tags: Pullout The Stranger’s No-Goddamn-Bullshit Wedding Guide
The Stranger depends on your continuing support to provide articles like this one. In return, we pledge our ongoing commitment to truthful, progressive journalism and serving our community. So if you’re able, please consider a small recurring contribution. Thank you—you are appreciated!
CONTRIBUTE NOW