They Demand Safe Lots and an End to Sweeps, but They Don’t Think They’ll Get It 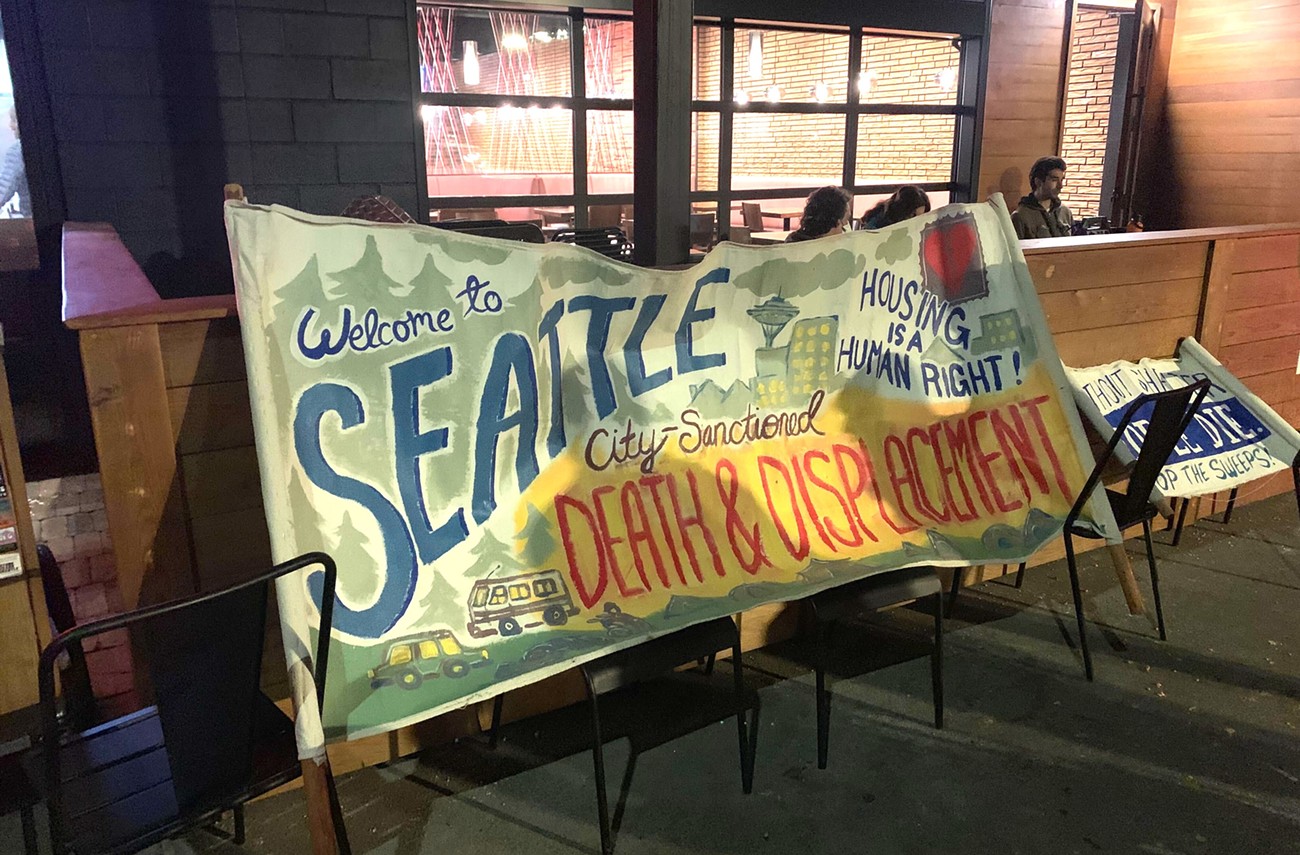 Tanya sat on a bench outside of a fast-casual chicken restaurant in a Ballard strip mall. She wore a bright pink beanie and zipped her coat to her chin to keep warm in the November evening cold.

As she waited her turn to call in to public comment and tell the City how to spend its money to help unhoused people like her, she smoked a cigarette and rocked back and forth.

“Are you nervous?” I asked her. It was her first time speaking to the council.

“No,” she smiled, shaking her head. “They won’t listen anyway. They’ll just screw us like they always screw us.”

Tanya wanted at least to try to influence the City budget. But for many, participating in public comment–whether online or in person–is easier said than done. She doesn’t own a phone, and she said giving a one- or two-minute testimony was not worth the long trek downtown.

Besides, Tanya said she finds it hard to keep tabs on City meetings when its leaders keep her so busy already, pushing her RV from neighborhood to neighborhood every three days. She wouldn’t have even known about the public comment period on Tuesday if organizers from the Solidarity Budget hadn’t invited her and her RV community to an event where unhoused people could borrow a phone to speak to the council.

Tonight, the Solidarity Budget organizers and volunteers will lend their phones to unhoused people who don’t have their own phone to call in to advocate for their needs in the budget at City Council’s public comment period at 5pm. pic.twitter.com/vAjnVBaXmZ

Over the past few weeks, the Seattle City Council has picked at the Mayor’s proposed budget. On Monday, Budget Chair Teresa Mosqueda attempted to marry the Mayor’s suggestions, amendments from her council colleagues, and the City's financial realities in her counter-proposal.

Mosqueda invested in Seattle’s homelessness response by reversing the Mayor’s pay cuts to human service workers and knee-capping efforts to increase sweeps by moving a small portion of new funding for the City’s sweep squad (aka the “Unified Care Team”) to the King County Regional Homelessness Authority.

But the unhoused people at the Solidarity Budget’s public comment event said the council was not listening to them.

Mike Davis, who's been unhoused for many years, said public comment is all theater–just politicians in suits pretending to listen when “they already have their minds made up,” he said.

While Tuesday was the first time many unhoused participants had ever commented at a meeting, they knew that the council had heard (and ignored) their demands before, especially the demand to stop the sweeps.

Samuel Lange has been unhoused on-and-off for 10 years, and he’s noticed a recent uptick in sweeps. After he got kicked out of his tiny shelter earlier this year, he said the City has swept him six times in the last four months and never offered him more than a tent for shelter. Without a stable place to anchor, he stopped going to his dialysis appointments, which he needs to attend three times a week to keep his kidneys functioning.

“I’m going to die out here, and they don’t care,” Lange said.

Even if his public comment seemed unlikely to move the needle, Lange said he had to try because his life depends on it. And he went through hell to do it, too. While he waited for his turn to speak, his tent, planted a few blocks south of the event, caught on fire in a propane accident and burned down.

But he said it’s important that the council hear directly from unhoused people, even if they’ve heard it all before from housed advocates.

“Housed people don’t know the half of what we go through,” Lange said. “It’s more powerful to hear from us.”

After hours of waiting in the cold and dark, he called in to tell the council to defund the City programs that sweep unhoused people and to use that $38 million to fund affordable housing.

Tanya and Davis told the council that they wanted the City to spend its money on RV safe lots. As it stands, Mosqueda’s balancing proposal includes an amendment from Council Member Dan Strauss to add about $100,000 to the Human Services Department to conduct outreach to RV residents and pay for parking offense mitigation. The City also earmarked about $87 million for the King County Regional Homelessness Authority over the next two years. According to the authority’s 2023 budget, they’ll spend $5 million on 130 RV safe lots around the county.

Davis said he didn’t have high hopes the council would listen. And even if they did, a few million in the budget wouldn’t solve the underlying poverty that forces people into homelessness. But he said that building community between unhoused and housed Seattleites that night carried far more power than giving a one-minute testimony.

Twenty or so people gathered outside the chicken restaurant, huddled up in pairs over cell phones stuck on hold. But they weren’t sitting in silence. They were commiserating over the wait that out-lived their hand warmers. They were giving and taking clothes from the mutual aid booth. They were getting to know each other over warm drinks from the community table.

“Homeless people have a powerful lobby,” he said, gesturing to the community. “And when the council doesn’t listen to us, they just keep making more of us.”