"This is not Capitol Hill Block Party. Don't forget what happened a week ago." 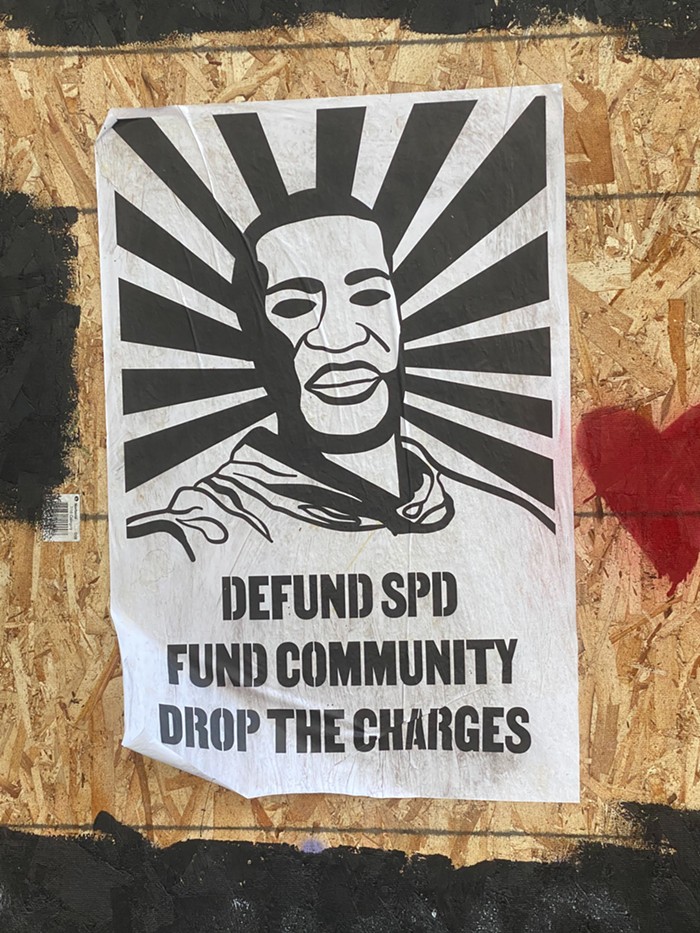 Seattle residents are participating in the great CHAZ experiment in droves—but will the "autonomous" community achieve its ambitious demands? Chase Burns
The "Capitol Hill Autonomous Zone" is bigger than it's ever been.

Tonight, the six-or-so-block radius within Seattle's Capitol Hill neighborhood was filled with more teach-in tables, murals, free food, tents, and people than it had been since this conflict between demonstrators and police began over a week ago.

Protesters have called this an uprising and have a long list of demands that include rent control, free college for the state of Washington, and abolishing the Seattle Police Department and "the attached Criminal Justice Apparatus." Demonstrators endured days of unnecessary police brutality to create this space, and they are quick to remind new visitors about it.

Haven’t seen anything like this so far #seattleprotest pic.twitter.com/MkdyBG1EZq
— Chase Burns in the CHAZ (@chaseburnsy) June 8, 2020

Not five days ago i was leaning out this same window, terrified, watching tear gas and flash-bangs being lobbed at protesters. Now, today, people are painting a BLM street mural, eating hot dogs, and discussing what a police-free future could look like: pic.twitter.com/NPyFE0VfFc
— jasmyne keimig (@jasmynekeimig) June 12, 2020

Now, it's starting to look a lot like a massive street festival in the middle of a pandemic.

The community garden is growing.
Yesterday, someone planted a garden in Cal Anderson Park. Today, that garden grew to two gardens. They are big, fenced, and surrounded by at least 45 tents. If any part of CHAZ was a commune, it would be this part.


"There are people in Cal Anderson who are camped out and are treating this like a picnic and not a movement that has meaning," suggested one apartment-dwelling CHAZ resident to me earlier today. But it should be noted that the gardeners of this “guerrilla garden" think of these plots as "a story of reparations," and hope to donate the food if they are allowed to stay long enough to see the plants bear fruit, reports Seattle Times' Heidi Groover.

Up near the East Precinct, there are teach-ins, with an evolving list of speakers. What was once just one circle has evolved into many teach-in tables that seem to grow exponentially—on harm reduction, transformative justice, community safety.

In other parts of CHAZ, there are hot dogs, music, a candle-lit vigil for victims of police violence. People have started showing up with trays of free food, including vegan options. The No Cop Co-Op has expanded around the block, offering crowd-funded food and supplies to everyone but cops. Other tents with supplies have popped up, too. Murals are multiplying around the area, including, notably, this one:

The street's transition is a shocking transformation from early Monday morning, when the SPD deployed blast balls and tear gas in their longest confrontation yet on Capitol Hill.

"I was not expecting fucking pepper spray today."

Mayor Durkan and Chief Best are both not taking responsibility for the East Precinct packing up and moving on Monday—even though the move-out was coordinated and lasted many hours. Best has suggested she's angry about the decision to abandon the East Precinct and called it "an insult." She apologized to SPD officers and said "we know this has had an impact on your families." More from The Stranger's Nathalie Graham:

As far as CHAZ goes, according to the mayor's comments, she sees it as harmless and something akin to Capitol Hill Block Party so it will be allowed to last for now. But, contradicting that was Best's report that 911 response time has increased three times over the average (clocking in at 15 minutes) since SPD left the East Precinct. Plus, Durkan also indicated the SPD is trying to map out when it is best to move back into the precinct. Councilmember Kshama Sawant and some demonstrators want to turn the precinct into a community center for restorative justice.

And then this afternoon, SPD officers returned to the precinct, but not without conflict.

Sorry, they’re in there. Just needed to look up. pic.twitter.com/MvAJJTyEOO
— Chase Burns in the CHAZ (@chaseburnsy) June 11, 2020

Around 6 pm, some officers were exiting the East Precinct when this incident happened, per Groover at the Times:

A team of officers who had been inside the East Precinct were exiting the building, and apparently the arriving officers were assigned to meet and escort them out of the area, [demonstrator Zachary] Coon said. As the exiting officers headed southbound, toward the other officers at the intersection, protesters began flanking them and chanting for them to leave, he said. One demonstrator attempted to push a barricade across the sidewalk in front of the officers exiting the zone, Coon said – and that’s when things got confrontational.

“I heard people yelling, and saw some shoving, but it was hard to see exactly what was happening,” said Coon, who videotaped and photographed the encounter. “A couple of people claimed later they were pepper-sprayed.”

The incident was posted on Facebook, here. It happens around 1:10 in the video, and you can hear one person say, "Jesus Christ, I was not expecting fucking pepper spray today" around 1:55.

It remains to be seen how often SPD will return to the East Precinct. Seattle City Councilmember Kshama Sawant posted on Twitter this evening that her office is quickly bringing legislation forward to convert the East Precinct into a community center for restorative justice.

Our movement needs to urgently ensure East Precinct is not handed back to police, but is turned over permanently into community control.

"THIS IS NOT COACHELLA."

A woman with a megaphone walked through the crowd at Cal Anderson this evening, shouting: "THIS IS NOT CAPITOL HILL BLOCK PARTY," referencing the teen-filled, overcrowded music festival that happens in this corridor every summer. The fest, like most summer fests in Seattle, was canceled earlier in the spring due to coronavirus. Officials have warned against people gathering in large groups, and yet here we are, gathering in droves all over CHAZ. As many have noted, racism is also type of a pandemic.

"Don't forget what happened a week ago," the woman on the speaker continued. People cheered. Her sentiment was repeated throughout the night by organizers.

It’s hard to explain how massive tonight is at #CHAZ. Bigger than it’s ever been.

But as one organizer said:
REPEAT AFTER ME
THIS IS NOT A FESTIVAL
THERE WAS POLICE BRUTALITY HERE
ALL LAST WEEK
WE
ARE HERE
TO ABOLISH
THE POLICE
AS AN INSTITUTION
IT NO LONGER SERVES US pic.twitter.com/6yNDzHFVpi
— Chase Burns in the CHAZ (@chaseburnsy) June 12, 2020

Throughout the zone, speakers popped up to remind the many new visitors that "THIS IS NOT COACHELLA." As people lounged in one part of the area, speakers encouraged visitors to go and attend Nikkita Oliver's "#DefundSPD Block Party" happening up on 12th and Pine:

Come through! #DecriminalizeSeattle and #DefundthePolice!


"This is not a festival!" One speaker shouted at an attentive crowd. "Yes, you may be entertained by Black art, but this is not Coachella... We are here to abolish the police." As crowds continue to overwhelm CHAZ, a main concern will be turning all of this attention into action. That said, when comparing the night's peace to the prior week of violence, it's hard to be cynical.

Also, what happened to the lights in Cal Anderson? I swear they were left on later last night.