What the alley behind the East Precinct currently looks like. CB

What's going on at the CHOP tonight? The No Cop Co-op has grown to take over most of where 11th Ave meets Pine. The alleyway behind the East Precinct continues to fill up with tagging and murals. A multi-racial group of Proud Boys have shown up and one Black woman with them is yelling that the real killer of Black people is abortion. I'll drop a few pictures throughout this evening news round-up. I'll also be following a march from the CHOP to the West Precinct, which is supposed to happen around 7:30 pm.

Washington state recorded another 324 new coronavirus cases today: That brings the total number of cases to 26,158 and 1,221 deaths. Roughly 4.7% of people diagnosed with COVID-19 in Washington have died. 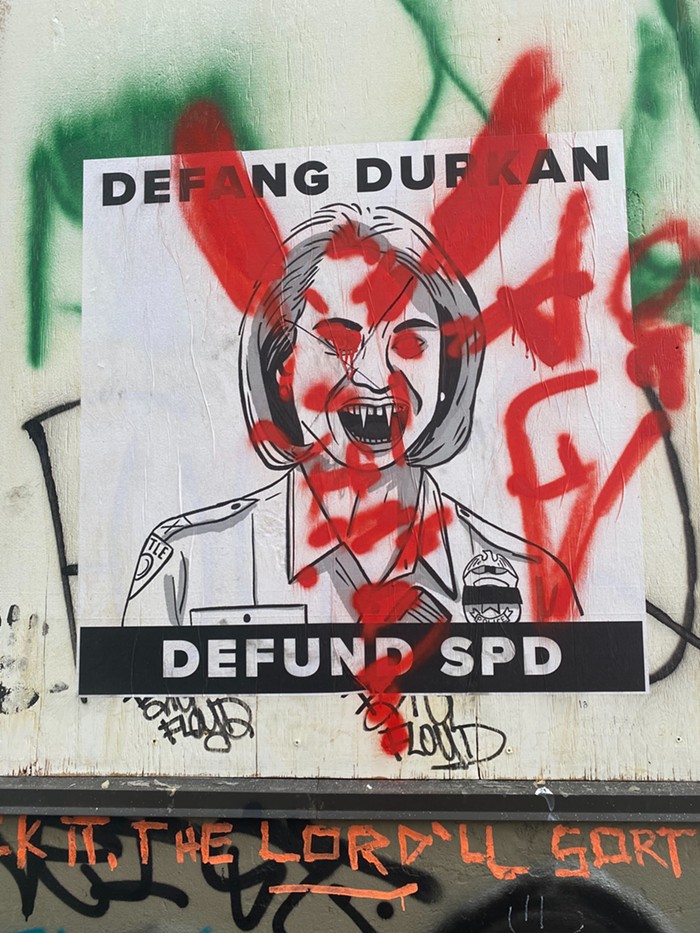 This is also in the alley behind the East Precinct. CB
Matt Shea may not be running for reelection in the Washington House of Representatives, but he's still trying to get eastern Washington to secede from the state. "Shea says he wants to put on the issue on the ballot for this November in every county in eastern Washington," notes KOMO.

Here's what we know about the killing of Rayshard Brooks by Atlanta Police, via The Intelligencer. The 27-year-old Black man was killed on Friday night. Here's what initially happened:

Shortly after 10:30 p.m. on Friday night, two Atlanta police officers, Devin Brosnan and Garrett Rolfe — who are both white — responded to a complaint that a man, later identified as 27-year-old Rayshard Brooks, was asleep in his car and obstructing other vehicles in the drive-through lane of a Wendy’s restaurant on University Avenue in southwest Atlanta. According to the Georgia Bureau of Investigations, which is investigating the shooting, the officers gave Brooks a sobriety test, which he allegedly failed. The GBI says that when the officers then went to arrest Brooks, he “resisted and a struggle ensued,” prompting one of the officers to deploy their Tasers. Brooks was able to obtain the Taser before trying to run away, according to the GBI, and then “officers pursued Brooks on foot and during the chase, Brooks turned and pointed the Taser at the officer. The officer fired his weapon, striking Brooks.”

The New York Times has an in-depth analysis of all the available footage: Here.

That Wendy's was burned down, which you probably saw over the weekend online.

I had to get this footage cause the media will make it seem like we burned this shit down #AtlantaProtest pic.twitter.com/mGi8kAYqUw
— Fola 🇳🇬👑✊🏿 (@ImKingFola) June 14, 2020 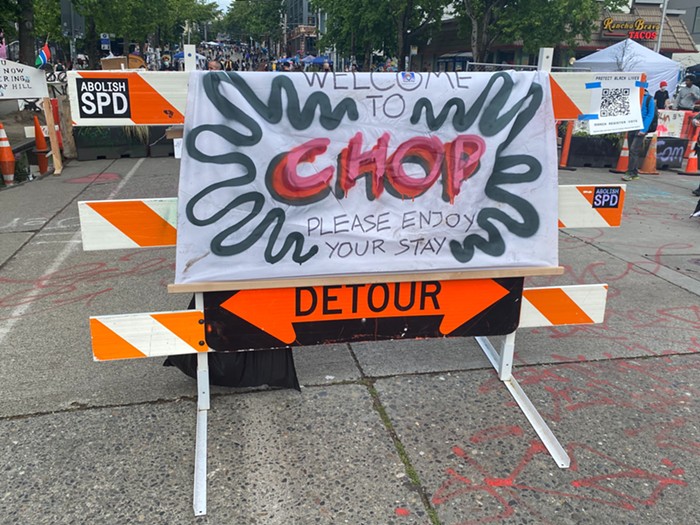 Signs around CHOP declare its new name, which stands for Capitol Hill Organized Protest, although some disagree with the new name. CB
Say her name: Equally disturbing, this weekend brought news of the death of Oluwatoyin Salau, a 19-year-old Black Lives Matter activist who had been missing in Tallahassee, Florida. Her body was found along with another victim, Victoria Sims, 75, an AARP volunteer. Both deaths are being investigated as homicides. From the New York Times:

Ms. Salau was last seen on June 6, according to the police, and friends and fellow activists raised concerns about her well-being after she wrote a number of alarming posts on Twitter that day in which she described being sexually assaulted by a man who had offered her a lift and a place to stay.

She had recently gained attention as a prominent voice in protests in Tallahassee after the death of George Floyd in police custody led to a national reckoning over racism and police violence. Videos posted to social media showed Ms. Salau making impassioned speeches in support of the Black Lives Matter movement. 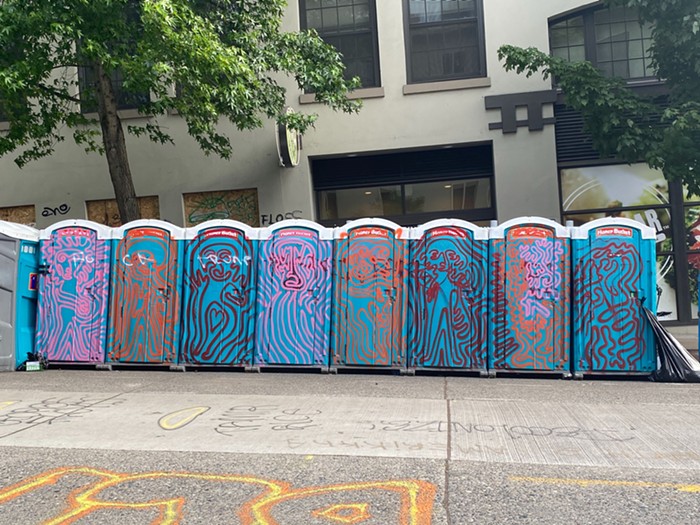 The SDOT-provided porta-potties have new tattoos. CB
A horrifying trend: Remember when Nikolas Fernandez drove into demontrators and shot hero Dan Gregory in Capitol Hill last Sunday? That plowing-car-into-crowd move, reminiscent of the Charlottesville attack in 2017, is happening again and again. The Washington Post calculates that there have been "at least 19 cases in the past few weeks in which witnesses or police say civilian vehicles were driven through massive demonstrations after the May 25 death of George Floyd."

And here's Nathalie Graham with some updates from Seattle City Council:

The Seattle City Council passed police reform bills today: Who says bureaucracy is slow? On Monday, during another long council meeting, three police-reform type laws were passed unanimously. Here, let's give each of them their own lil blurb.

No more chokeholds: Kshama Sawant's law banning the Seattle Police Department from using chokeholds passed unanimously. Sawant stressed that though the legislation was important it's "the bare minimum. Many cities have anti-chokehold laws. One of those, New York City, had a chokehold ban when an NYPD officer killed Eric Garner with a chokehold in 2014.

The big one: Sawant had a second bill that passed. This one bans SPD from owning, buying, renting, storing, or using crowd control weapons. Whew, talk about extensive. This legislation comes on the heels of Mayor Jenny Durkan's bullshit tear gas ban and a two-week temporary restraining order (TRO) won in a federal court case (that both Chase and I are involved with) that restricts SPD's usage of "less-lethal" weapons. While there was some conversation about this Sawant bill getting delayed and drama over a loophole-y amendment, ultimately it passed unanimously without any loophole-y amendments. However, it doesn't say what happens to the weapons that SPD owns now. They're still technically allowed to have those.

We can't forget the mourning bands: Councilmember Lisa Herbold submitted legislation requiring SPD officers to show their badge numbers at all times and not cover them with a mourning band. SPD Chief Carmen Best had previously ordered this change to happen but now, with Herbold's legislation (which also passed unanimously), it's written into city law.

On a separate note: The council passed legislation that will give food delivery gig workers premium pay since they're basically working as frontline workers during the COVID-19 pandemic.

An op-ed in the Seattle Times: C’mon people, the West Seattle bridge is an emergency, act like it 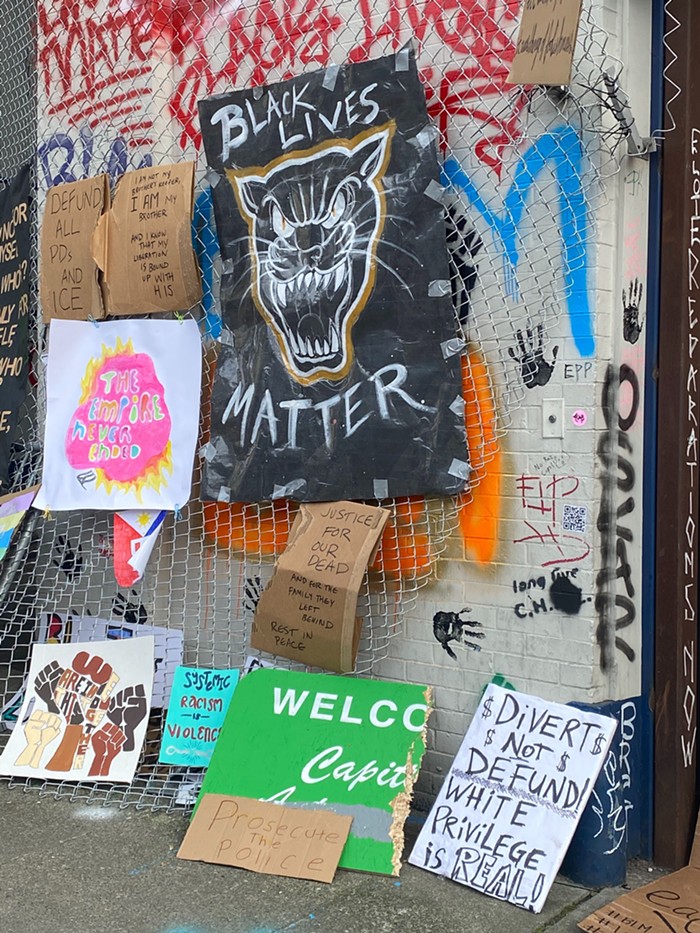 The green “Welcome to Capitol Hill Autonomous Zone” sign sits cut in half near the East Precinct. CB
The 2021 Oscars will be delayed by two months due to the coronavirus. The next Oscars ceremony will take place on April 25, 2021.

Coronavirus cases are booming in some states, including Arizona, Texas, and Florida. Across Florida, bars and businesses are having to shut down as staff test positive for coronavirus. My mom and her boyfriend, who live in St. Pete, are quarantined for a week because people they work with are testing positive.

The "Cloud Wars" rage on: Amazon plans on opening a 111,000-square-foot office for over 600 Amazon Web Services workers a few miles outside of Microsoft's headquarters in Redmond next year. ICYMI: Microsoft, Amazon, and Google are in a famed "war" over cloud computing.

Aubreanna Inda lost her pulse after being hit with a flash-bang by SPD early Monday morning a week ago, during the longest confrontation yet on Capitol Hill. She's recovering and still protesting, and she also filed a declaration as a part of a lawsuit from Black Lives Matter-King County against the city of Seattle. (The Stranger's Nathalie Graham is a plaintiff in that lawsuit and I also filed a declaration testifying to what happened the night Inda lost her pulse.) "They can stop my heart from beating once, but it’s not going to stop for this cause at all,” Inda told Seattle Times' Sydney Brownstone. Here's my video from the incident, where you can see Inda getting hit in the second embedded tweet: