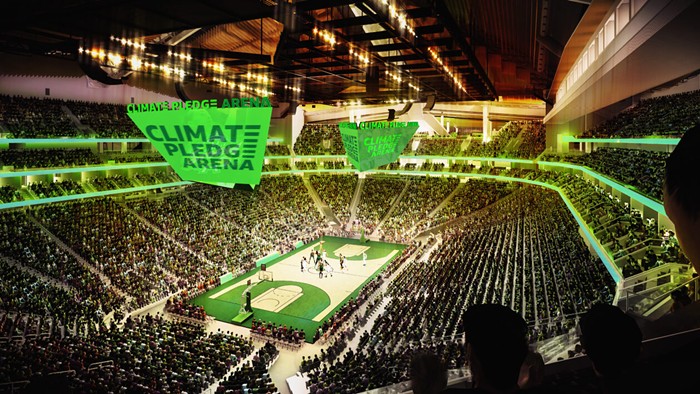 That rink is rainwater, baby! Courtesy NHL Seattle
Meet the... Climate Pledge Arena: Amazon has bought the naming rights to the (RIP) Key Arena, which will be home to Seattle's new NHL team. It's named after Amazon's Climate Pledge, which it announced last year. The Climate Pledge Arena promises to only offer recycling and compost (no trash bins!), and feature the "greenest ice in the world" that's "comprised of rainwater and refrigerants with no greenhouse gas emissions." Microsoft better buy the Cinerama and rename it the "Carbon Negative Cinema" if they want to keep up with the Bezoses.

I’m excited to announce that Amazon has bought the naming rights to the historic Seattle arena previously known as KeyArena. Instead of calling it Amazon Arena, we’re naming it Climate Pledge Arena as a regular reminder of the urgent need for climate action. It will be the first net zero carbon certified arena in the world, generate zero waste from operations and events, and use reclaimed rainwater in the ice system to create the greenest ice in the NHL. #ClimatePledge

A little reminder that Amazon's 1-day shipping is terrible for the environment and that Amazon fired tech workers who criticized the company’s warehouse workplace conditions.

Housekeeping: I'm sorry that this PM is up slightly later than usual. We've been stuck in Stranger Election Control Board meetings all week—this time around, they're all being conducted over Zoom. The bad part about having endorsement meetings over Zoom is we don't get bribed with treats and booze. The good part is I can interview Frank Chopp without leaving my bed. (Our endorsements will drop here on the Slog once ballots come and stuff our boxes in the middle of July.)

Members of the Seattle Black Collective Voice from CHOP held a press conference today: The goal was to "reclaim the narrative" around CHOP. Obviously, there are a lot of narratives out there. Rich Smith did a post on it in between SECB meetings. A snippet:

[Naudia] Miller argued the East Precinct "was never the goal of the Black collective or the allies" at CHOP. She said the Seattle Police Department drew the zone's borderlines when they "terrorized" the neighborhood and the protesters who they had kettled on 11th and Pine for over a week.

She didn't come down on one side or the other in the debate about whether CHOP residents should stay put or leave the precinct, but said the group would continue expressing its First Amendment rights and would "be there to educate" those who "choose to hold space at CHOP."

“It’s the will of the people,” Miller said when asked how long CHOP residents plan to camp out.

Damn: Seattle Theatre Group announced today that they are furloughing 70 percent of their staff and postponing the announcement of their 2020/2021 season. Will there be any theater in the fall? Theaters are allowed to open at up to 50% capacity once we hit Phase 3... whenever that is...

Demonstrators are continuing to hold marches from CHOP to the West Precinct: Today it looks like there will be ~three. I-5 was briefly shut down again.

Almost a month after #seattleprotest first took to the freeway, demonstrators from the #CHOP still closing I-5. https://t.co/6MAthWgqhG
— Jake Goldstein-Street (@GoldsteinStreet) June 25, 2020

No more Dixie for these Chicks: The Dixie Chicks are now just The Chicks. "We want to meet this moment," said The Chicks. The move follows country music group Lady Antebellum changing their name to Lady A a few weeks ago. I'm hearing the Winn-Dixie supermarket chain is sweating.

Some of @traderjoes130's demands:
- ALL crew members must be given the opportunity to return to work.
- Trader Joe’s needs to apologize to Black crew members and customers for failing to acknowledge that Black Lives Matter.

A Proud Boy has been arrested for violating his parole to visit CHOP: Tusitala “Tiny” Toese was involved in at least one assault while in the Zone. "He was recorded on video pushing a man while others punched the man and threw the man’s cell phone to the ground, breaking it," reports KPTV. He was arrested and booked into the Multnomah County Jail in Portland.

As Jasmyne mentioned this morning in Slog AM... Despite the intensity of the coronavirus outbreak in their county, some Yakima prisons guards are still not wearing masks. To make this shit even worse, Yakima County Sheriff Robert Udell says they won't enforce Inslee's face covering order in Yakima County. "I support the individual’s right to determine the level of safety each one of us chooses, free of the threat of government intervention," said the sheriff.

"Any time [Trump] wants to set foot in the place he claims is his hometown, he should be reminded Black Lives Matter,” said NYC Mayor Bill de Blasio's spokesperson today in response to Trump's tweet complaining about NYC's plan to paint BLM on the street in front of Trump's tower. Trump also made a false claim about a "Pigs in a Blanket, Fry 'Em Like Bacon" chant "that has not in fact been a common chant at protests in New York or elsewhere since the death of George Floyd one month ago in Minneapolis," notes AP.


Real Change is back on the streets of Seattle: Vendors will be selling Real Change branded hand sanitizer for $3! Remember, you can buy Real Change with Venmo.

It's Anthony Bourdain's birthday: TBH I cried a little looking at this pic of Bourdain inside Add-a-Ball in Fremont.

"I love Seattle. I’ve had many happy experiences there. From the beginning of my writing career, it’s a town that has welcomed me—" celebrating the life of #AnthonyBourdain on his birthday @kexp by playing some tracks he loved like Marvin Gaye "What's Going On" + @marklanegan... pic.twitter.com/5fuYyUrkhH
— Kevin Cole (@djkevincole) June 25, 2020