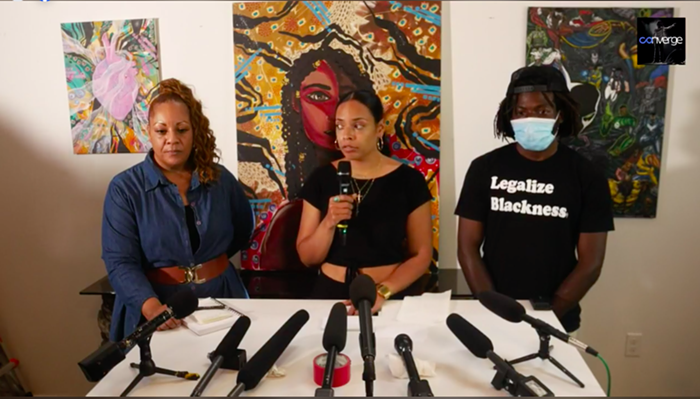 Representatives from the Black collective voices of CHOP. Screenshot of Converge Media Press Conference
At a press conference Thursday afternoon, members of the Seattle Black Collective Voice from the Capitol Hill Organized Protest (CHOP) sought to "reclaim the narrative" of the area following a weekend of gun violence, slow police and fire responses to that violence, demands from the mayor and the police chief to leave the zone, and growing resistance to the protests from local businesses and apartment dwellers.

Miller argued the East Precinct "was never the goal of the Black collective or the allies" at CHOP. She said the Seattle Police Department drew the zone's borderlines when they "terrorized" the neighborhood and the protesters who they had kettled on 11th and Pine for over a week.

She didn't come down on one side or the other in the debate about whether CHOP residents should stay put or leave the precinct, but said the group would continue expressing its First Amendment rights and would "be there to educate" those who "choose to hold space at CHOP."

“It’s the will of the people,” Miller said when asked how long CHOP residents plan to camp out.

She did, however, reaffirm the CHOP demands—i.e. release all jailed protesters, and defund SPD by at least 50% and use those dollars to fund housing, health care, and community restorative justice programs—and she made it clear that the Black collective voices "will not be bought off."

Miller said forceable removal of the activists at CHOP "will not stop us or our movement," which stands ready to "take action" and to collaborate everywhere. Last week Mayor Durkan committed to "peacefully and in the near future" taking back the police station they abandoned and sending "de-escalation teams" to clear the park.

Citing a survey she distributed two weeks ago, Miller said Seattle Black Collective Voice answers a call for Black leadership from a majority of the CHOP's mostly white residents.

Miller also put blame for the shootings and other issues at CHOP on the shoulders of state and local officials. "Homelessness, substance abuse, and gun violence have been longstanding problems in the area. Governing bodies have continued to fail at resolving these issues despite clear direction from Black and Indigenous POC leaders who represent the communities impacted the most," she said.

As with all things CHOP, however, the Black collective voices don't seem to speak for the whole group. A few minutes after the press conference, one of the other protesters said there will be another press conference at 2:00 p.m. tomorrow announcing other demands. I'll update this post when I hear more about that.

Over the phone, Henderson drew a line between CHOP and BCV. "The Black Collective Voice is not CHOP, but we were formed and born from CHOP," he said.

Though the group only came together in the last few weeks, Henderson said he was "in awe" of BCV's organizational prowess and of their vision of offering educational experiences and skills training to communities.

As he's done at Cal Anderson, he plans to teach farming and gardening skills to empower people and to open up larger discussions about land use and gentrification.

Talks with Seattle's parks and public utilities departments about making permanent the garden in Cal Anderson have been fruitful, Henderson said.