"My goal is to make fantasy, fairytale, magical-hero stories set in Seattle," says the composer and playwright Justin Huertas. 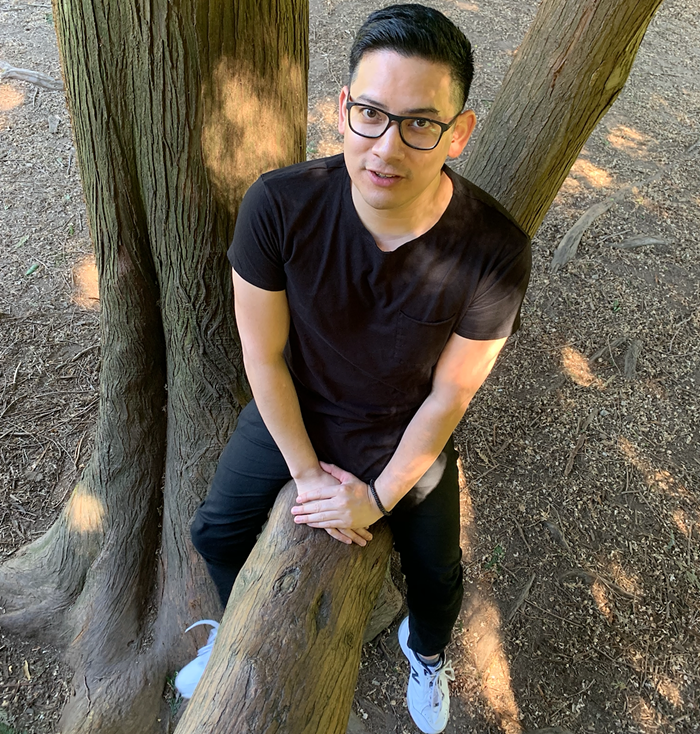 "I wanted to write myself as a superhero because I had never seen someone like me as a superhero before," says Justin Huertas about his debut musical in 2015. He's written four other musicals since then. Photo by Christopher Frizzelle
"We have plenty of Western mythology that centers on white people," says Justin Huertas, the composer, lyricist, playwright, actor, singer, cellist, guitarist, and pianist.

We're walking around Volunteer Park, six feet apart, in masks, on a recent sunny afternoon, trying to find a good spot to snap a photo for this article.

"I want to create American mythology that centers Black people, brown people, people of color, queer people, trans people. One of the biggest fights we're in right now is recognizing marginalized people as human beings. The bare minimum you can do is put them onstage and give them dignity. I want to go past that, beyond that, to making them superheroes. I want to give them superpowers. And I want them to save the fucking world."

Huertas made his debut in 2015, with the world premiere of his first musical, Lizard Boy, which he also starred in, at Seattle Rep.

If you are blown away by his boundless imagination and the speed at which he works, you are not alone.

"Justin is like no one that I have ever met," says Mat Wright, the artistic director of ArtsWest. "Both how he comports himself as an artist and also the art he makes. He has pretty much the most open imagination of any artist I've encountered in my life."

Asked to make his best superhero pose, Justin did this. Photo by Christopher Frizzelle
Wright was "totally blown away" by Lizard Boy when he saw it, and over drinks at Solo bar on Lower Queen Anne, the two got to talking about working together. Wright asked Justin to pitch him ideas for a new show, which resulted in ArtsWest commissioning The Last World Octopus Wrestling Champion, a new musical that premiered in 2019.

Wright remembers saying, "Send me some pitches because I don't even want to suggest a subject. Whatever you want, dream it up and send it over." Huertas sent him two different ideas, and the one Wright picked was "a paragraph about a girl who turns into an octopus." It didn't even have a title.

As with lots of myths and fairy tales, there's something about Huertas's work that initially "sounds somewhat familiar," Wright says, until you realize you are not in the hands of a typical storyteller.

"In Octopus, you're watching a scene about mother and daughter. Seems familiar. You go, 'I've seen this.' But what they're actually talking about is that the daughter is turning into an octopus and she doesn't know how to talk about it."

With Justin's work, Wright says, "You get stuff that feels totally fresh and yet totally familiar, and you can watch it with this double consciousness. Like: 'Wow, I can't believe someone is writing a piece of musical theater about a character singing to her mother about turning into in an octopus. And not only is it not the most ridiculous thing I've ever seen, it's actually one of the most moving things I've ever seen.' How? Who does that?"

Huertas also turned the show into a sneaky way to educate Pacific Northwesterners about the shocking (and now outlawed) practice in the middle of the last century of people jumping into the Salish Sea and literally attacking and wrestling with giant pacific octopus (which are native to local waters). It used to be that whoever wrestled out the biggest octopus won.

"The wild thing is he takes something like that—a weird historical anecdote—and spins it into a story about family and growing up and letting go and queer love."

His most recent musical, Lydia and the Troll, is an origin story for the Fremont Troll. Photo by Christopher Frizzelle
I ask Justin, 33, who grew up in Mukilteo, why he likes to make contemporary mythologies, fairy tales, and folklore about the Pacific Northwest. He responds, "Growing up and watching all of the plays and musicals in Seattle, and seeing that they were all set in England or New York—that was always the thing. I remember seeing a lot of shows at Seattle Rep and wondering why there are so many plays set in New York."

He recalls, "I think what really sparked that for me was seeing God of Carnage at the Rep. I think it was originally set in Brooklyn or Queens, but they recentered it so it would be in Bellevue, I think? I remember watching it and feeling like 'This doesn't make sense to me,' because of the language and how people talk to each other. Part of me was like 'This isn't Seattle, this doesn't sound like Bellevue to me, this is still New York with a different background.' And that's the thing that got me thinking: How many plays can I name that are set in Seattle? And my answer to myself was 0. So I just want to create more stories that are set here, because I love it here."

His latest musical mythology, Lydia and the Troll, an origin story for the Fremont Troll, was supposed to have its world premiere last month at Seattle Rep, but that was obviously postponed.

"Lydia opens her heart and lets a stranger in, and as a result Lydia is transformed into the troll," Justin says, explaining the story to me. "And then there's a curse she has to figure out to reverse." (Which leads to an Into the Woods joke from me that will be omitted here.)

"Justin is indeed special," says Ameenah Kaplan, the director of Lydia and the Troll. "It was love at first rehearsal. Part of what makes him great to work with, in my opinion, is his generosity. He writes from a place of trying to empower not only silenced voices, but to shine a light on the artists that surrounds him. His dedication to his talented friend circle is admirable and enviable."

All of them feature prominently in Gay Misérables, a funny, queer, revolution-oriented evening of songs and conversation with five of the city's most exciting theater artists. All of them are queer, and most are POC. (Full disclosure: It is a Stranger event, and I am directing it.)

In Gay Misérables, Justin will perform a cover of a song from Sondheim's Follies—he's obsessed with Sondheim, and in college created a production of Company as his senior project—as well as performing a duet from Last World Octopus Wrestling Champion and a solo from Lydia and the Troll.

"It just seems like he has an open channel of imagination," says Wright, the artistic director of ArtsWest, "so he can write songs, shows, about pretty much anything, at pretty much any time. And he can do it faster than anything I've seen anyone do, which is the other interesting thing about him. You'll start talking, or have some thought, and halfway through you articulating it he's already got six or seven potential solutions, and then by the next morning he'll have a whole new song, or a scene. It's crazy. He's that fast."

On the lawn at Volunteer Park near the Noguchi sculpture, I ask Justin to strike his best superhero pose. At first he doesn't know what to do. Then he puts his fists up and grimaces, like he's ready to challenge any odds, any creature, human or mythological, that might stand in his way.

Asked about the revolution that we can practically hear as we walk around, Huertas says: "The reckoning is not just for white people. It's for non-Black POC as well. I've been reflecting on the ways in which I have benefited from the system, the ways in which the system has been working for me, so that I can recognize my own privilege and try my best to utilize it for Black Lives Matter."

He adds, "I wrote this metaphor on social media like a week or two ago, about the fact that BIPOC artists are just climbing these ladders that have previously only been available to white artists, and we're just trying our best to stay on the ladder and not have our ladder be taken away or knocked off. So I feel like I'm climbing a ladder and doing my best for people who want a leg up as well. I thought that was the perfect metaphor, but then I realized that this ladder—it's still a white ladder! It's still a ladder that someone else has control over. So what I can do in this moment is be grateful that I've gotten this high and make my own ladder. Or tie a bunch of sheets together and throw them down. Or make jet packs."

From Firefighter to Gourmet Chocolatier: The Story of Chef Michael Poole