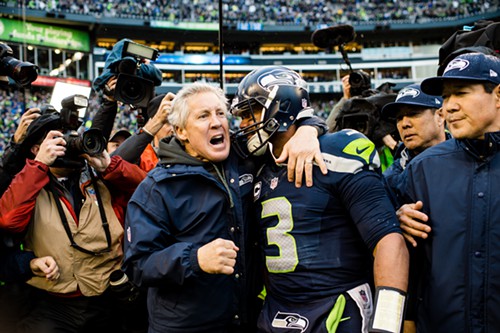 7:17: What a game. So hard to be on the wrong side of it. This is what sports is about, though. Feeling stuff in a setting where it doesn't really matter. So feel it. This is a bad one. Spend 24 hours feeling it. Then let it go. And don't get yourself in trouble with the law and your loved ones in the interim.

7:07: I don't know. Did we deserve to win that? What the hell. Just totally gutted. So gutted. Can't believe it.

7:06: Take the day off tomorrow. The day after tomorrow is another day.

7:02: No one is ever going to be able to explain that play call. This is heartbreaking. This is really bad.

7:01: Russell Wilson intercepted on the goal line. Seahawks season is over. Wow.

6:56: Wilson throws at him. Coulda been ballgame either way.

6:27: And the Patriots drive after Edelman plays through a concussion and it's 24-21.

6:19:Erik Wareheim for glue? I'm very nervous, but that can't be real?

6:16: Avril out with that concussion. The NFL has changed? Maybe? Probably not.

6:10: Kam "Angela Merkel" Chancellor with a big backside hit on Shane Vereen, who still is healthy.

6:09: Jermaine is a good pass catcher with bad hands. It's weird.

6:05: Ricardo Lockette now. Him having a big catch or two I saw coming.

6:02: Huge third down here. Three minutes left in the third... AND WAGNER WITH THE HIT. AMENDOLA DROPS IT. LET'S GO.

6:00: Bennett winning the battle against Stork. Getting back that field position from Doug. Awesome stuff.

5:57: Pass Rush was warming up, but Cliff Avril undergoing concussion protocol. Will be interesting to see how that battle proceeds.

5:56: Who had James Bond advertising Kia?

5:55: Who had Doug Baldwin with the personal foul before Lockette and Lynch?

5:54: PEDESTRIAN DOUG BALDWIN WALKING INTO THE END ZONE FOR A TOUCHDOWN: 24-14 SEAHAWKS.

5:47: PASS RUSH MEAN PICKS BOBBY WAGNER GETS THE BALL BACK FOR SEATTLE. INCREDIBLE.

5:46: Michael Bennett starting to impose his will. Things are getting better.

5:45: All-out blitz on third down. Brady takes a hit. Gronk takes a hit. But the Pats get just enough to keep the drive alive.

5:42: Impress your friends by saying, "Chris Matthews is a new and improved David Tyree."

5:41: Stranger employee Devin Bannon with the important #Social fact that the Super Bowl is the number one trending item on Facebook. First time in a year. Big if true.

5:37: And Hauschka gets rid of his Arizona related demons: 17-14. Seahawks with their first lead of the day. And now Liam Neeson is doing app ads. Everyone is getting paid.

5:36: Seahawks forget to run the touchdown play. Hauschka runs in.

5:22: THE MORE YOU KNOW. FIREWORKS. I WILL NEVER DO DRUGS AGAIN. I'LL LOVE WHO I LOVE. HALFTIME IS ALL TIME.

5:21: THE IMAGES ARC BACK TO THOSE AT THE BEGINNING. THE NARRATIVE IS COMPLETE.

5:20: THEY'VE GIVEN MISSY THE SHOW. OR HAVE I? AM I CONTROLLING THE SHOW WITH MY MIND.

5:19: WE'RE ALL INSIDE TRON. TRON IS THE PRISON. GET OUT OF HERE. MUST ESCAPE WITH MY MIND.

5:18: MISSY ELLIOTT COMES OUT. THE POLICE ARE HERE. I'M SO FUCKED, GUYS. WHAT IS FOOTBALL? SAVE ME!

5:15: THE BATTLE FOR GOOD AND EVIL IS WAGED BETWEEN HOMOSEXUALITY AND HAVING SEX WITH LENNY KRAVITZ. PLEASE, KATY PERRY, MAKE ME GOOD AND ALSO GAY.

5:12: Dropped a bunch of acid and now Katy Perry is riding a giant animitronic lion god.

5:02: Halftime. Tie game. This is thrilling. I would like to see more Lynch and more hitting Brady in the second half. I would also like more Seahawk miracles. Halfway there.

4:52: I may have jumped the gun. Nineteen yard run from Turbin. Seahawks have 25 seconds left to give Hauschka a chance to make this close before the half.

4:50: Requesting a whole second half of us hitting Brady. Every play.

4:49: The Seahawks never leave a linebacker alone on the left side of their defense. They do it for one play to try to gain an advantage on crossing routes. The Pats see it immediately. Destroy accordingly.

4:47: REALLY WISH SHANE VEREEN WAS HURT. CAN I TIME TRAVEL TO HURT HIM? IS THAT A PARADOX?

STOP TWEETING ABOUT THE SUPER BOWL. PICTURES, DESCRIPTIONS, OR ACCOUNTS OF THE GAME WITHOUT THE NFL'S CONSENT ARE STRICTLY PROHIBITED.
— Matt Fisher (@fishermatt) February 2, 2015

4:40: Two-minute warning time. I just saw a Fiat take a Viagra. The Viagra went right past a priest, though. I think that ad is funnier. Not sure what it would be for.

4:31: MSNBC'S CHRIS MATTHEWS PROVING WE ALL KNOW NOTHING! SEAHAWKS IN THE RED ZONE.

4:30: First down! Barely. Barrrrrrely! Then Luke Willson misses a block. Come on, boys!

4:29: Or a Luke Willson penalty. Dubstep penalty? What is that? Getting busted for possession?

4:28: Seahawks third and one. Zone read maybe? Haven't seen it much yet.

4:25: This is the Bill Belichick show. This is what he wants you to have. He wants you to sit and watch his work. We are all the watchmaker's apprentice. This is our lives now. And it's boring.

4:24: Pats third down... and BRADY LOSES THE BALL OUT OF HIS HANDS BECAUSE IT'S TOO INFLATED! LAWNDARTGATE.

4:21: I once sat next to a man eating Doritos on an airplane. He used his sweatpants as napkins. I was on the window, and he was in the middle. I fell asleep and woke up to him and the man in the aisle seat having a full on screaming fight. MAKE THAT YOUR AD, DORITOS.

4:19: And a dangerous throw. And a three-and-out for the Seahawks. And our punter has been bad. This is not great.

4:17: Also, the Seahawks took a touchback. Let's see if they do stuff on offense. I'm rooting for them!

4:16: ULTIMATE PARTY FOUL IS MIXING UP THE EXPENDABLES AND FAST AND FURIOUS, AMANDA.

4:12: Pats 7, Hawks 0. Tharold Simon can't keep up. And then he gets by Earl Thomas. Seahawks in serious injury trouble in their secondary. Byron Maxwell only fully healthy defensive back left. NOT GOOD. TIME FOR LYNCH.

4:10: And Simon gets burned. Injuries officially a problem.

4:09: Another Pats third down after Bennett makes a play after another non-OPI. THIS IS ALL GAME.

4:08: I liked it more when I thought Vereen was hurt

4:07: Lane out. Simon in. They challenge him. He makes a play. Then Maxwell blows a coverage. Third and short Pats. Hawks need another stop.

4:05: I think we might need to play Russell Wilson at wide receiver.

4:03: Budweiser sad lost dog ad deemed too sad given that it's Pats' ball, 0-0 in the second quarter.

4:02: Bryan Walters trying to get open to make a big play is why third and long is a problem.

3:59: A 25-minute first quarter? I don't even know what is happening. I assume this Belichick's plan, but Pete Carroll is probably into it too? This is officially weird-ball.

I should probably stop using the word break for a while.

3:53: AND THE PASS RUSH GETS HOME. FORCES THE BAD PASS FROM BRADY. JEREMY LANE PICK!

and then Jeremy Lane hurt.

3:52: Third and medium Pats in the red zone. HUGE PLAY COMING UP!

3:49: Really nice run from Blount and the Patriots are driving.

3:43: Room full of Seattle artists like BMW ad. None of them can afford BMW. Will they change their lives? Probably not. But maybe?

3:42: Seahawks punter Jon Ryan has been slumping. His first punt wasn't great today. This could be an annoying subplot.

3:37: Our special teams is the dumbest unit on earth. Another penalty. Lucky to not be a first down.

3:35: Seahawks D gets a stop. Pass rush looks okay, but Brady is rushing things. Not sure how that battle is going.

3:32: Sherman went with a receiver in motion into the slot. Missed the tackle, but interesting.

3:31: There's a football game happening. I'm scared of what may happen.

3:29: Hauschka's about to kick off. Hopefully this is his house!

3:21: The ads are already terrible. Football hasn't started. I'm gonna die from nerves. Tell the Seahawks so they use my death to motivate them.

3:17: Yes, the woman eulogized is related to Kate and Rooney Mara. Also, "America the Beautiful" is a great song. Way better than "God Bless America." EVERYTHING IS GOING WELL THUS FAR.

3:07: SORRY FOR THE BREAK, BUT I HAD TO FINISH MAKING GUAC! People are asking about the 12 dips. Here there are in order of how much I like them:

2:30: Ravens head coach John Harbaugh is in the booth! I wish Jim Harbaugh were there, too.

Bob Costas: "What's it like to see the team that destroyed your NFL coaching legacy back in the Super Bowl after getting the trophy you couldn't?"

2:25: I just put on the Super Bowl preshow after cooking all morning (I made 12 dips), and I'm instantly filled with regret. All I want is some sort of concrete update on the health of Kam Chancellor. According to the internet, he's reportedly both "good to go" and also "wearing a knee brace." Now, those aren't mutually exclusive concepts, but my word do I not need to hear about Russell Wilson's ability to overcome the odds when compared with live Chancellor updates.

2:23: My eye is bulging out of my skull. My arms are numb. My entire body is shaking uncontrollably. That can only mean one thing of two things: I'm being constricted to death by a large snake, or it's Super Bowl time!

I'm insufferably nervous, but I'll be LiveSlogging my way through it right here all day. So keep refreshing for updates. Also, read my preview if you want to know what I think will happen (so you can throw it in my face when it doesn't).

Comments 156
Tags: Blogs Sports
The Stranger depends on your continuing support to provide articles like this one. In return, we pledge our ongoing commitment to truthful, progressive journalism and serving our community. So if you’re able, please consider a small recurring contribution. Thank you—you are appreciated!
CONTRIBUTE NOW