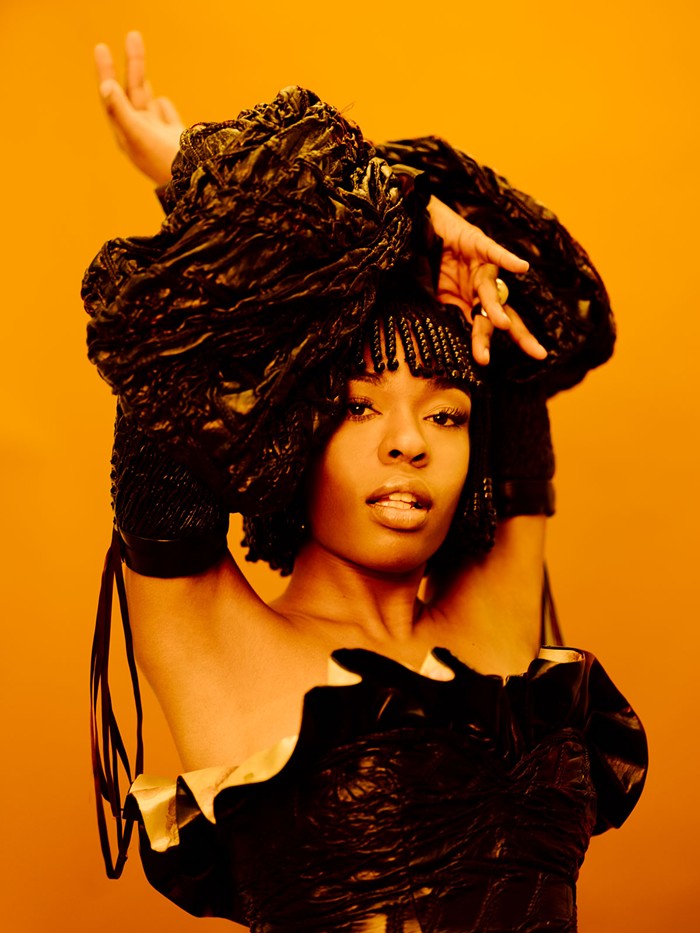 The violin limit-pushing of Sudan Archives is lovely and accessible. Alex Black
Tweet

Sometimes it pays off to listen to an artist simply because they have an intriguing name. In the case of Sudan Archives, I was hooked from the moment "Did You Know" (the lead-off track on 2019's Athena) dropped from sparse violin string plucks and honeyed vocals into a heavy, synthesized low-end groove, fuzzed and snapping beat, and flippant, multi-tracked vocal pipings.

Sudan Archives isn't from some far-off land, as her name implies, but Cincinnati, Ohio. She's mostly self-taught on violin, which she became interested in after a group of fiddlers played for her fourth-grade class. She learned to play by ear, honing her skills in the church band. She was born Brittney Denise Parks, but she's been known as Sudan since she was a teen, a name she not only assumed but has come to embody in her sound, which began to take shape after she discovered the one-string fiddling of Northern Africa.

"The scales they play just sounded totally different to classical music," she told Vancouver paper the Georgia Straight in 2018. "The way they played it stuck with me, and it inspired me to keep doing what I was doing, even though I never had any formal training. I loved how good at multitasking they are, and that the violinists play at the same time as singing. Then, when I heard [Cameroonian electronic music pioneer] Francis Bebey, who was incorporating electronic drums with the thumb piano and different rhythms, I started thinking, 'Oh man, maybe I should start making some beats and fuse violin with it.'"

She moved to LA at age 19, where she held down a few jobs, studied ethnomusicology at Pasadena City College, worked on her own idiosyncratic style of playing while producing beats and sounds on an iPad before graduating to sampler, MidiKeys, an actual computer, and then a full-on loop station. She released her early electro-fiddling experiments under the name Sudan Moon.

Eventually she caught the ear of a Stones Throw Records exec and was signed to the label. Two EPs in 2017 and 2018, Sudan Archives and Sink, followed. In an NPR interview last year, she said those outings were "just haikus of my potential and now the album is a narrative. It's actually the biography of life from 19 to now." And those records do feel more like half-formed thoughts compared to the fully realized consciousness streams on her debut full-length.

Named for the goddess of wisdom, war, and the arts, Athena is an apt introduction and shows what Sudan's capable of achieving with support from a team of producers that included Rodaidh McDonald (The xx, Sampha) and Paul White (Danny Brown, Charli XCX). It's bigger and more ambitious than her bedroom productions, more slickly and finely wrought without losing its DIY moments. She bares it all, literally, on the album's cover, which finds her nude, sculpted in bronze, posing strong and proud like a Greek goddess, balancing a violin on one hand, and within the album, where she addresses themes of family, sex, rebelliousness, money, and heartache.

Her combination of earthy and electro sounds is reminiscent of trip-hop, though instead of jumping off from jazz and hip-hop, it's rooted in R&B and African sounds. Its ethereally groovy, pared-back production is magnetic, a mix of bowing and pizzicato plucking that's often layered, looped, and/or effected to add texture and dimension to her compositions, though her violin limit-pushing and experimentation remain accessible.

Sudan's tuneful higher-toned vocal comes off as bold or breathy, imbuing her songs with a yearning sensuality (like in the light, airy "Down on Me," with its sweeping, fairy-tale romance strings), or sweet self-assurance, or mesmerizing tenderness. The languid and breezy "Iceland Moss" sounds like a day of sun-lit love-making, while the earwormy, radio-pop-sensible "Limitless" reflects its materialistic subject, a woman who stays with her shitty man because she's obsessed with his money. "Glorious" is also about money; Sudan told Stereogum that it's lyrically and sonically inspired by old traditional songs from Sudan and Ghana—but instead of praying to God for rain or growing crops, her version focuses on "getting the bag." And the chanted chorus says it all: "Focus on the bottom line, then you'll never fall behind."

If she continues her seduction by strings, she never will.

More than ever, we depend on your support to help fund our coverage. Support local, independent media with a one-time or recurring contribution. Thank you!
Contribute
The Stranger depends on your continuing support to provide articles like this one. In return, we pledge our ongoing commitment to truthful, progressive journalism and serving our community. So if you’re able, please consider a small recurring contribution. Thank you—you are appreciated!
CONTRIBUTE NOW

EarthGang Are Taking the Dirty, Freaky ATL Sound to a New Level of Fun Bizarrity