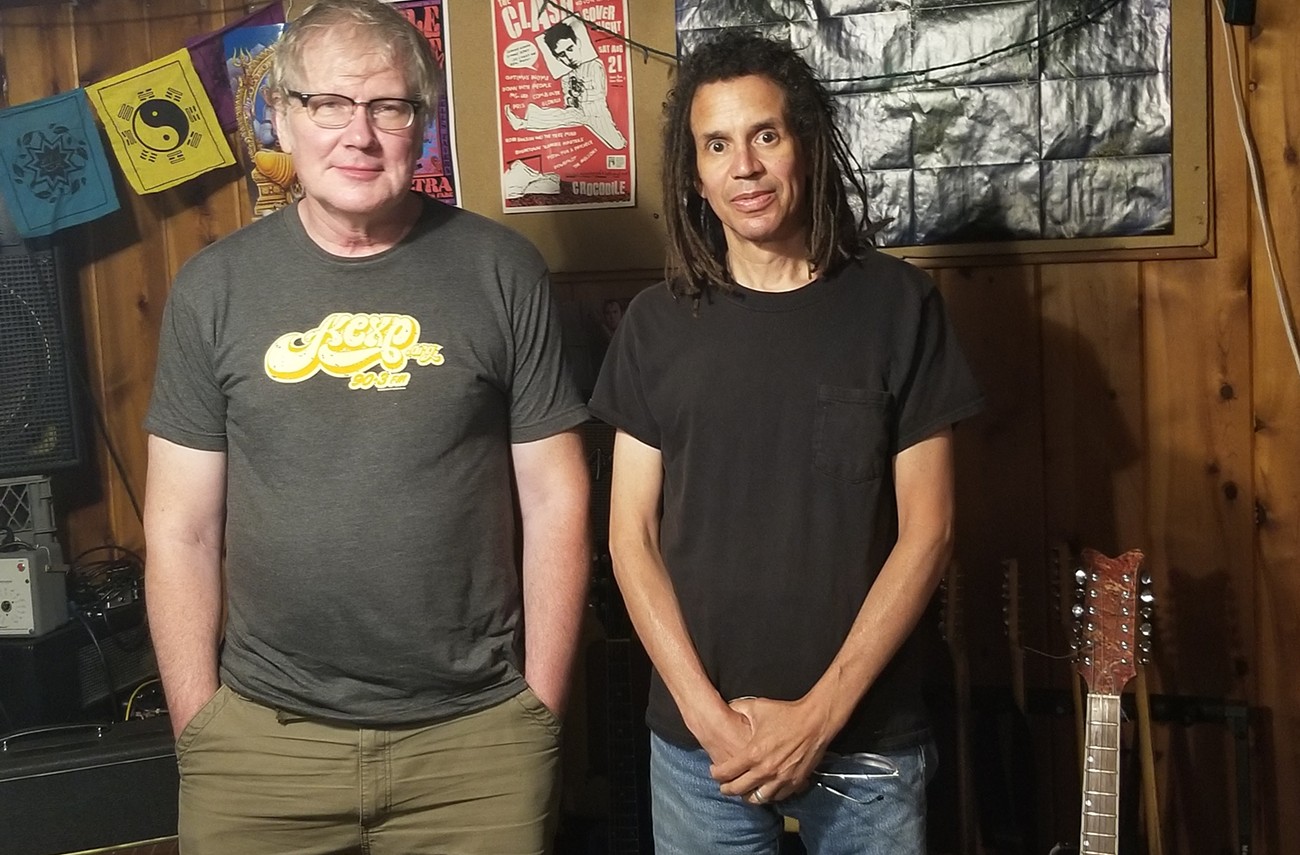 Ron Rudzitis and Kevin Whitworth in the Love Battery studio in the former's basement. Dave Segal

To a degree, the members of Love Battery are the Rodney Dangerfields of Seattle’s grunge-era rock renaissance. Their 1990 EP Between the Eyes and 1992 album Dayglo represent peaks in Sub Pop Records’ early-’90s catalog, yet the label always seemed to regard Love Battery as a low priority compared to Nirvana, Mudhoney, and TAD. As Love Battery were touring the US at the height of their Sub Pop-affiliated glory, their hard-drinkin’/hard-tokin’ members were still sleeping on the floors of kind fans’ dwellings.

Despite pleas from Love Battery to have their Sub Pop releases—the aforementioned records plus 1993’s Far Gone—reissued, the company has passed. But Sub Pop did agree to allow Portland’s Jackpot Records to release a vinyl reissue of the band’s album Dayglo (out September 30). Ahead of its release, The Stranger interviewed Love Battery singer/guitarist/lyricist Ron “Nine” Rudzitis along with fellow original Love Battery guitarist Kevin Whitworth in the former’s home studio.

Spin magazine ranked Dayglo #14 on its 20 Greatest Grunge Albums of All Time list, although whether it qualifies as grunge is debatable. Love Battery have more in common with Sonic Youth than Pearl Jam. In these pages, I described Dayglo as a “brand of psych rock [that] eschewed that genre’s more flowery aspects for a bruising, cruising approach that made mind expansion seem like a contact sport.” Anyway... Producer extraordinaire Jack Endino has remastered the LP, which makes sense, as he also currently plays with Whitworth in Sky Cries Mary and with Rudzitis in the Purple Strange.

This Dayglo reissue won’t have bonus tracks, but it will contain liner notes by Rudzitis and Stephen Tow (author of the scholarly book The Strangest Tribe: How a Group of Seattle Rock Bands Invented Grunge), a lyric sheet, and previously unseen photos. The initial run will total 3,000 copies: 500 on pink wax (the Jackpot Records Exclusive Edition); 500 on yellow wax for indie shops; and 2,000 on sky-blue wax. For those who value physical formats, it will be great to have this classic back in print, as originals are scarce on the used market and the lone copy on Discogs is going for $81.

A conversation with Whitworth and Rudzitis is akin to a secret history of Seattle rock, with generous dollops of gossip. You can delve even more into the subject by reading Mark Yarm’s Everybody Loves Our Town: An Oral History of Grunge. But we need to focus on the 30th-anniversary re-release of Dayglo. Being in the thick of Seattle’s rock scene in the late ’80s and early ’90s, did Love Battery feel a strong sense of competition and peer pressure to break out nationally? “No,” Whitworth says. “We just wanted to get our rent paid and do what we wanted to do.

“When we were finally out there and Nirvana and some other bands were doing well, journalists who interviewed us were looking for us to be angry,” he continues. ““How do you feel about Nirvana breaking big?’ It lifted all the boats! We had people who were sleeping on my couch who are now stars. In a lot of cities, it felt like there was only one band who could make it out. It didn’t feel like that in Seattle then. If anybody does well, maybe we can all make it. If Mudhoney’s doing that in the next room, we can do it! It was very exhilarating.”

Whitworth recalls Love Battery’s first non-Seattle gig in Portland. They opened for the raucous Touch and Go band Killdozer. Backstage before the show, Whitworth recounts, members of Killdozer were grading papers. It was a complete subversion of expectations. “We were just glad to be out playing in another city. It didn't matter if anyone was there. We were happy to get $100 a night and a case of beer. And then we’d have to find a place to sleep. But we had the bar staff—who were not getting paid, because there was no one ordering drinks—standing on top of the bar and tables and making us play extra songs. But the next time we came through, we had a lot more people.”

When Kevin and Ron listen to Dayglo 30 years later, is there anything they want to change? “I’d say no,” says Whitworth. “I had trepidation about doing a remaster at all. But Jack and Ron found things to tweak. Jack pointed out that on ‘Blonde,’ there are no cymbals. They got lost in the wash by my guitar. He was able to bring things out like that. I was afraid to even go near it. There’s something magical about that record. The bleed that happened... it was a very small studio there. We were touring heavily, the songs were very well practiced before we went in there. So I didn’t want to touch anything. I love all of the songs completely.”

“I’m rediscovering tracks that I forgot were there,” Rudzitis says. “I’m always harsh on my vocals. Some of them I could’ve done a better take, but you know what? That’s just me being hypercritical.

“After [bassist] Jim Tillman joined, we were practicing four nights a week and we were touring behind the European and Australian releases of Between the Eyes. We became an exponentially better band. We recorded Dayglo after a tour and then left on a tour and then came back and mixed most of it.

“Tillman showed me the open C tuning that I used on ‘See Your Mind’ and ‘Cool School’ and many other future Love Battery songs. His contributions to the arrangements cannot be overstated. His bass parts are incredibly imaginative while still creating monster rhythms with Jason’s drums. Playing with [Jim] again and [new drummer Cassady Layton], let alone Kevin, reminded me of how lucky I am to be playing with such great musicians.”

Rudzitis remembers how aware he was of crowd reactions and how the band exploited those on Dayglo. “We all were hyped as hell because we’d just signed with Sub Pop, we knew it was going to be released domestically, and the Sub Pop name had such clout. It was a high.

“Once Dayglo came out, holy shit, it wasn’t just the bartender and five people. Clubs were packed, but we were still sleeping on people’s floors. When we came back from tour, I remember quitting my job and having enough money to pay the rent.”

“And this was during the lowest point of Sub Pop’s existence financially,” Whitworth says. “My wife used to have to go to Sub Pop’s offices at the Terminal Building and pound on his door. ‘[Sub Pop cofounder Jonathan] Poneman, where’s my rent?!’ They were paying us each $400 a month. This was when they were broke.”

The songs on Dayglo may be 30 years old, but Love Battery’s core duo haven’t tired of resurrecting them. When Whitworth plays them now, he says it feels “like it’s a dream. If Cassady weren’t playing so well, it might be painful. Sometimes we’ll play a song just like it sounds on the record. Cassady heard us as a kid, because his father played our records. He said, ‘I can't believe I'm a part of this.’ I feel the same way! This feels like some sort of animation.”

“What’s incredible is, this guy from Australia is flying in for the show [October 15 at Sunset Tavern],” Ruzitis says. “To think we had that kind of effect on someone blows my mind. I listen to those songs and I love ’em. They’re a huge part of my life.”

“They don’t seem old,” Whitworth says. “The ideas seem just as good. How clever is that to go three-and-a-half in reverse here and six-and-a-half here? I'm actually really impressed with ourselves,” he concludes with a laugh.

“Even back then, I used to think we’re kind of a band that only other musicians like,” Rudzitis says. “To an extent, maybe that was why we never crossed over, but I think lack of promotion was a big part of it. We had to keep it interesting for ourselves. In that respect, it was always on the edge when we performed live.”

“Because we’re still working things out sometimes,” Whitworth says. “We used to think of these songs as gags, like jokes. And jokes need to have perfect timing to work right. We used to think, ‘How can we get this punch line delivered? And where should it go?’ We used to look at songs in a very analytical sense. Ron always had all of the chords and lyrics in there, but we did a lot of arranging and working things around. It took a lot of work, which is something not everyone wants to do. [Drummer Jason Finn] wasn’t so fond of all the work we wanted to put in. At one point, we were getting a salary to be in a band, so Ron and I thought we should play four days a week at least and at least four hours, because this is our job. Jason thought he always had the right way to do things, but we disagreed.”

“That tension came out in the songs,” Rudzitis says. “I’m blown away by his drum parts.”

“Changing up the beats in the middle of a song was something he did all the time,” Whitworth says. “That's what we had to communicate to Cassady. Thankfully, he takes instruction very well. Like, ‘Highway of Souls’ kind of shifts to a funk song. He got that right away.”

Back when Rudzitis was working at Muzak checking in tapes that came from shoe stores and other businesses, he would listen to Love Battery practice cassettes. “I would record all of our practices religiously. And for the most part at practice, if I didn’t have lyrics, I’d be ad-libbing or I’d have a book in front of me and steal lines. It was a real crucible of finding these best lines that kind of just came out of the ether and being able to compile them into the songs.”

“I’m the biggest fan of Ron’s lyrics, and they inform my guitar playing,” Whitworth says. “One thing I like about his lyrics is they can mean anything you want them to mean, in a way. I’m getting goose bumps just thinking about them. It’s literally an inspiration to me when I’m playing guitar. I’m trying to chase his words around with the stuff that I’m doing.”

“It’s amazing how we have me and the rhythm section, and then Kevin takes what’s there and puts it into another dimension,” Rudzitis adds. “Now I’m getting goose bumps.”