Why Weed and Alcohol Don't Mix

The scientific explanation for getting the spins. 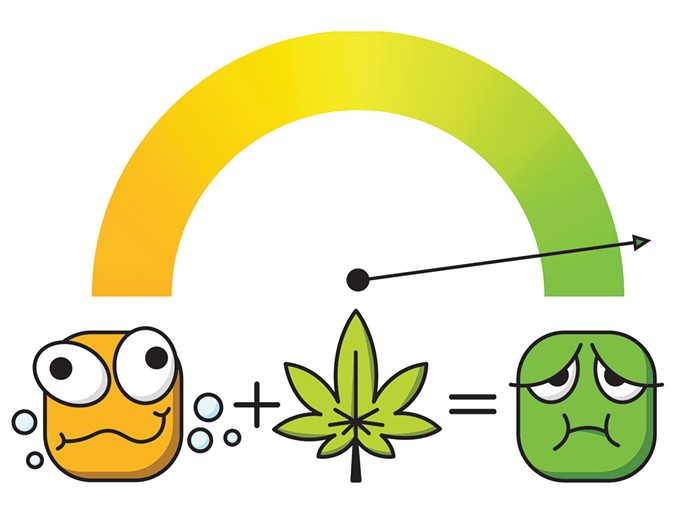 We've all been there. You're drinking at home, hiding out from coronavirus while listening to 69 Love Songs and sniffing your ex's old undershirts. You're adequately sauced, but not so drunk that you can't remember all the words to "I Don't Want to Get Over You." Then you decide that what this moment really needs is a little bit of weed.

Bad move. As I learned every single weekend from the ages of 18 to 25, the wrong mix of booze and weed can be a toxic combination. Your blood pressure will drop, your stomach will seize, your skin will turn clammy, the color will drain from your face, and the world will start spinning. And that's before you start puking. What seemed like a good idea at the time can quickly end with your head in the toilet if you're lucky, and in the bushes if you're not. It is, to put it mildly, unpleasant.

This doesn't happen to everyone. Some people can drink a handle of Jim Beam and do half a dozen dabs, and then walk in a straight line and repeat the alphabet backward. We call these people "alcoholics." But for many of us, adding weed to an already full stomach of booze can be a real party killer.

There's a pharmacological reason for that, says Scott Lukas, the director of the Behavioral Psychopharmacology Research Laboratory at Harvard, and a man who has spent his career studying the effects of combining recreational drugs.

In 1992, Lukas published a study on what happens when people drink alcohol and smoke weed, and what he found was surprising: Cannabis actually lowers the blood alcohol content by impairing the absorption of alcohol into the bloodstream. In other words, adding THC to the mix kind of sobers you up, while at the same time getting you stoned. In theory, this sounds great, but the problem is what comes next: People tend to increase their alcohol consumption if they aren't getting as drunk as expected.

"What would somebody do if they drank three beers, which normally makes them tipsy, and all of a sudden they're not feeling it?" Lukas asked me over the phone. The answer is obvious: Drink more. And this, in turn, can lead to over-intoxication and everything that comes along with it, including the spins, the puking, and the feeling that if the world isn't ending, it should be.

Interestingly, the effects on THC levels are reversed when combined with booze, which Lukas found in a 2001 study: "When subjects smoked a marijuana cigarette and then drank, the THC concentrations skyrocketed," he told me.

It's also less likely to make you sick if done in this order. From my extensive personal experience, this checks out, but what's the reason behind it? It has something to do with the anti-nausea effects of THC and other cannabinoids—the very things that make weed such an effective treatment for the upset stomach that can accompany chemotherapy or illness.

"It depends on the drugs, the dose, and the order in which you do it," Lukas said. "If you smoke first, you get the antiemetic [anti- vomiting] effect going on, so that if you drink too much, you won't get as nauseated."

Of course, the best way to avoid "greening out," as the phenomenon is called, is to stick with one drug or the other. "The effects are unpredictable enough when doing just one drug," Lukas said. "When you add a second drug, you add another whole dimension."

But if you're going to mix, remember this: Dosage matters. Order matters. As the old adage goes, "Drink to excess and then smoke, and the spins are no joke."