Why Do the Southern Resident Orcas Only Eat Chinook Salmon? 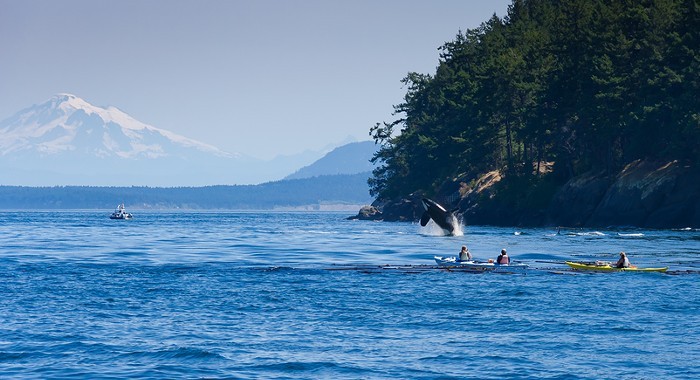 The primary cause of these orcas deaths is starvation. The southern residents—which include the J, K, and L-pods—survive mainly on Chinook salmon, another species in decline due to overfishing, hydroelectric projects, and the harbor seals that get to them before they make their way to Puget Sound. As the Chinook go, so do the orcas.

Officially listed as endangered since 2005, southern resident orcas' extinction would be, in many ways, a local tragedy. The orca are sacred to Native groups, and much beloved by locals. Last year, the story of Tahlequah, the J-Pod orca mother who carried her calf for 17 days after it died, captured national and international attention, with headlines all over the world speculating that the mourning mother was trying to tell us something.

There is no real evidence that Tahlequah or any other orca are aware that the source of their misery is the humans—humans damming rivers and tooling around in fishing boats and cruise ships above them—but orcas are among the smartest of animal species, with a highly sophisticated culture, unique dialects, and customs. In this case, it is precisely that culture that is proving to be part of the problem, because while other orcas on the planet eat other things (some subspecies of orcas eat mammals), the southern residents are largely dependent on this one species of salmon, the Chinook, which makes up 90 percent of their diet.

“I don't think anyone really understands why they only eat Chinook,” Lori Marino, a neuroscientist, animal behaviorist, and the founder of the Whale Sanctuary Project, told me. Marino is currently trying to establish a sanctuary in the San Juans for orcas and beluga whales that have been kept in captivity by places like SeaWorld, and she says there’s probably not a biological or genetic reason that Southern Residents are such picky eaters (or, as my colleague Christopher Frizzelle calls them, "the food critics of the sea"). Rather, it’s cultural. "They've been eating primarily Chinook for generations and it's very hard for them to switch,” Marino says. “That doesn't mean they won't eventually switch to another food source, but right now they haven't shown that they are.”

Marino says that because orcas are matriarchal, it will likely take a matriarch diversifying her food source, which the other individuals might adopt. But this isn’t looking likely. Instead, Marino says, it’s more likely that the orcas will move to different waters where Chinook are more plentiful. And this, she says, is already happening: the southern residents have only been sighted a couple of times in the San Juans this summer before leaving to feed somewhere better.

It’s not hard to see why orcas would prefer Chinook, a highly fatty and nutritionally dense food, but their pickiness is impeding their ability to thrive in their environment, and it’s a good example of how culture can be maladaptive.

This happens in plenty of other species as well, including humans, who have all sorts of maladaptive traits passed on through culture. One particularly interesting example is found in the Shakers, a religious sect established in England in the 18th century that was remarkably egalitarian, especially for their time. It was, also, however, doomed to fail: One of the guiding principles of their philosophy is celibacy, which means the population was entirely dependent on new recruits rather than breeding new generations, and as of 2017, there were only two Shakers left in the world.

As for the orcas, what they really need is more Chinook salmon, which will require tearing down dams on the Columbia and Snake rivers, cleaning up waterways like the Skagit and the Duwamish—as well as Puget Sound—and possibly culling harbor seals and sea lions. Outside of that, their best hope is to move, or, somehow, develop a taste for something else.

Meet the Men Behind the Mountain