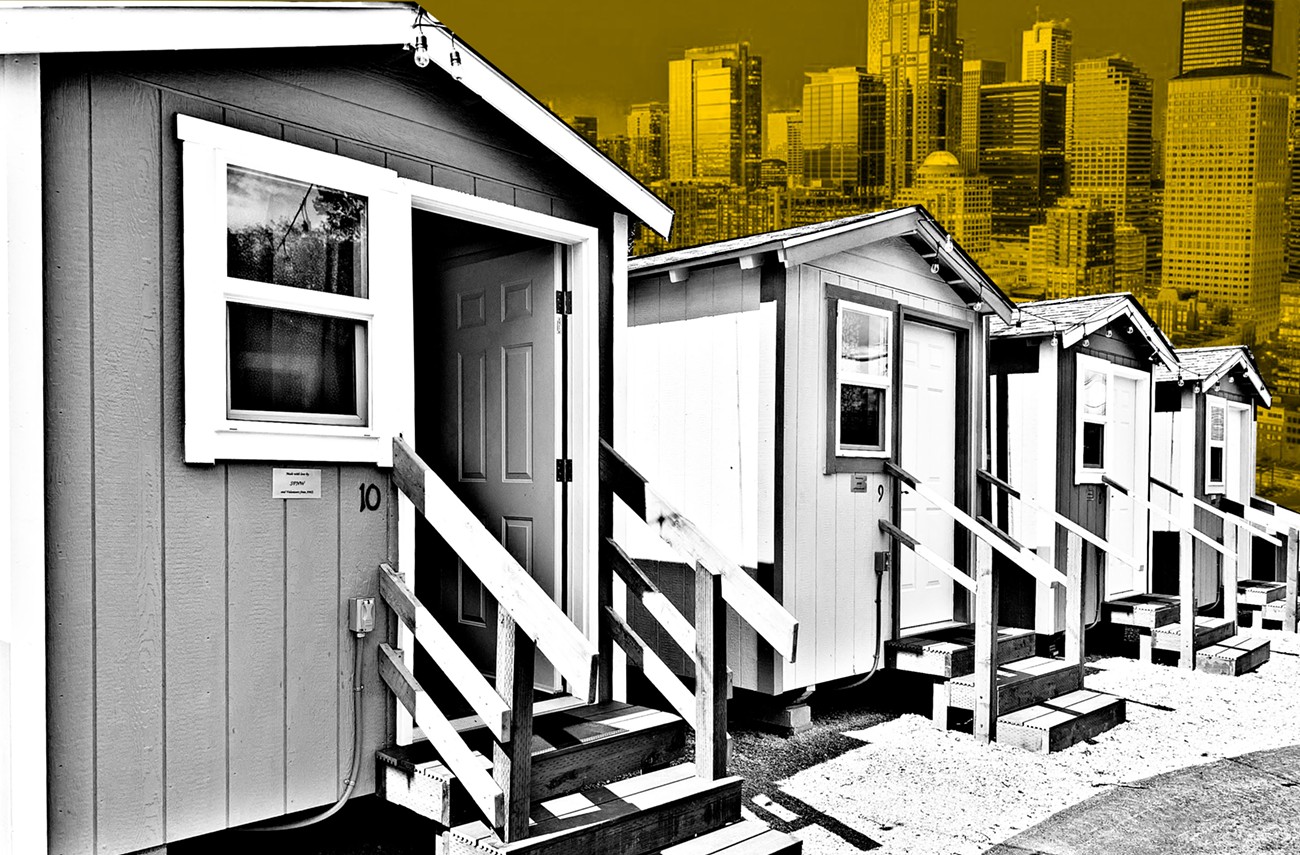 “The Mayor wants to get everyone off the streets so it’s pretty outside, but it's ugly inside those villages," said Julia, a tiny shelter resident. CROUTON

As of 10:44 am on June 6, Julia was no longer welcome at the Interbay Tiny House Village. But in a reversal later that day, the Low Income Housing Institute (LIHI) allowed her back into her shelter. Though she's inside now, the hours between those two decisions were marked by outrage and fear.

“I am no one’s bitch,” Julia said. “Especially not Sharon Lee’s.”

Julia, a Black single-mother who has experienced domestic violence while living outside, spent a week at the Interbay Village after the City swept her from Kinnear Park.

According to an exit notice issued last week, the village operators kicked her out over a few threats of violence she allegedly made while living in the Whittier Heights Village over a year ago. Julia denies the allegations, but they got her booted from both villages anyway. She claims that a case manager is holding a grudge against her. Though LIHI allows residents to appeal decisions, no independent authority oversees the process. The lack of such an authority makes her feel powerless to prove her case.

Additionally, she said she has already faced punishment for those allegations. When the Whittier Heights Village threw her back onto the streets in 2021, she fell back in with an abusive ex-boyfriend and suffered a traumatic miscarriage. She said she lost so much blood during the miscarriage that it took her an hour to walk to a Shell gas station that she could normally reach in under 10 minutes.


Despite her feelings of powerlessness, Julia appealed LIHI’s decision to kick her out for the second time, desperate to hold onto her spot for just three more months, when she would be eligible to cash in her housing voucher. With her abuser returning to Seattle this past weekend, the stakes had never been higher for her. If she could use the tiny shelter to avoid sleeping outside and running into him for the time being, she believed there was a true exit from homelessness for her in sight. Otherwise, she feared the harsh realities of living outside could cause her to fall off the path to permanent housing—especially with her abuser back in town.

“I hate [LIHI], but, at the same time, that's the only place you can go to get out of homelessness. They've made it this way,” she said.

Josh Castel, the nonprofit’s director of community engagement, declined to comment on the situation because it would violate confidentiality. He could only say, “Please know that we do follow our procedures closely with fairness and safety as our top priorities.”

Sharon Lee emphasized that there are bound to be complaints with such a large program. When they arise, her staff handles them to ensure safety for all residents.

Though LIHI reinstated Julia later that evening, her inability to clear up her alleged past behavior would have left her with no other tiny shelter option in Seattle. LIHI has cornered the market.

LIHI's monopoly on tiny shelters in Seattle started in 2020. At the onset of the COVID-19 pandemic, they were the only nonprofit offering a non-congregate shelter model, so they scooped up all the City contracts.

Villages began popping up left and right, and the shelters became so popular that Charlene Mitchell, interim director of emergency services at Compass Housing Alliance, said unhoused people hardly wanted to stay in her overnight congregate shelters now that the City was offering a private room behind a locked door. As of this month, LIHI was operating 11 villages with a total of 466 houses in Seattle.

The newest village, the Southend Village, is not unlike Interbay or other sites. Along an oval-shaped pavement path, the village offers high-end port-a-potties, a covered area for gathering, a tent for dining, and the main event: 40 little sheds.

At about 90 square feet each, the sheds are not much bigger than the kind a homeowner might have in her backyard. But with a little added charm, the shelters don’t read too much like garden sheds. The volunteers that built the sheds spruced them up with curly railings and cheerful paint jobs that coordinate with the rest of the miniature neighborhood. LIHI interspersed pavilions, picnic tables, and planters throughout the loop of shelters, and they topped it all off with string lights overhead.

Her comparison checks out. People come in, agree to a whole laundry-list of rules, and do their chores. If residents run into a problem, no tenant protections apply, and no third-party authority can help them. Though tiny shelters are often regarded as the best temporary shelter option we have in Seattle’s wholly broken system, “summer camp” is a much kinder descriptor than the State Advisory Council on Homelessness, the King County Regional Homelessness Authority (KCRHA), or some former residents may use.

Julia likened the villages to a domestic violence situation. The nonprofit sets strict rules, mandates chores, and, according to her, practices group punishment. On top of that, she said she felt like no one would listen to her.

Julia is not alone in this feeling. Patricia, who lived at the Interbay Village for two years, said she felt like her case manager was sexist and hellbent on her downfall. When she tried to complain to LIHI (in around 100 emails), she felt dismissed. She thinks she fell victim to the stigma that unhoused people are unreliable narrators, overly paranoid, or deceitful.

Julia and Patricia posed two ways to better handle their situations: Get more eyes on LIHI’s complaint system and get more providers to break up the nonprofit’s powerful hold on the industry.

Though people sometimes spend two years in one tiny shelter, LIHI handles all complaints from residents internally, without being subject to the protections the City gives tenants in permanent housing, according to Hunt from the Southend Village.

“It’s an enhanced shelter, so it’s definitely not landlord-tenant law, but there’s a grievance process,” Castle said of the villages.

If the resident is not satisfied with the way staff resolved the issue, or if the grievance involves site staff, then they can appeal the decision in writing to the Tiny House Village Program Manager. Castle did not respond to a request for more information about the grievance and appeal process.

For Julia, the appeal system worked, but it only worked after her appeal to the Ballard village’s 2021 decision failed, and only after she got kicked out twice.

Tiny House Village Project Manager Becca Finkes said LIHI has fielded 16 formal grievances since January. Six of those were exit appeals, and the nonprofit reconsidered four of them. Julia said residents would benefit from third-party eyes reviewing their complaints, otherwise the nonprofit’s monopolization of the tiny shelter market incentivizes residents to hold their tongues for fear of being banished from the best form of emergency shelter the City has to offer.

To empower residents even further, Patricia, who whole-heartedly believes in LIHI’s shelter model, but who disagrees with its case management system, suggested that more providers should offer the tiny shelters. That way, unhoused people wouldn’t have to rely on a single entity to provide a place to live.

“Every single grant for tiny homes, because of experience, goes to LIHI, and that needs to change,” Patricia said.

Councilmember Andrew Lewis, perhaps the biggest cheerleader for the tiny shelter model, said he’s been publicly advocating to diversify village operators in order to give unhoused people more options because shelter is not “one-size-fits-all.” His efforts under Mayor Jenny Durkan’s administration went nowhere, but he is hopeful the Harrell administration will be more amicable.

Lewis said he has yet to hear complaints about mishandled grievances or requests for oversight over LIHI. However, if someone came to his office asking for an agency to audit the nonprofit, he wouldn’t be opposed. “Everyone’s entitled to due process. Everyone's entitled to making sure that they're heard. We need to make sure that people aren't getting turfed out of tiny houses for arbitrary reasons,” he said.

Of course, even if other entities propped up tiny shelters, or even if LIHI allowed a third party to review complaints, housing experts caution against the City putting all its eggs into this one model’s basket.

In its 2017 recommendations, the State Advisory Council on Homelessness warned that these sheds were not suitable as permanent housing, which is the solution experts have been screaming from the rooftops. Others have made similar criticisms. Sasha Plotnikova, a writer at Failed Architecture, called tiny shelters in Los Angeles, which are built in Seattle, “a cage by another name.” A staffer at the KCRHA called the villages in Seattle “shantytowns.”

The comment from the staffer is not far off base from the authority's stated position on the shelters.

In a panel hosted by the Downtown Seattle Association last month, KCRHA CEO Marc Dones argued that the “simple structures,” a far cry from what tiny homes look like on Instagram, are only desirable because they are the only option for people with a partner, or a pet, or who want a door and a lock.

Felicia Salcedo, the executive director at WeAreIn, an advocacy group that works closely with the authority, added that despite the word “home” being in the name “tiny home,” a person staying in one of these shelters is indeed still homeless. The only true exit is permanent housing.

“The Mayor wants to get everyone off the streets so it’s pretty outside,” she said. “But it's ugly inside those villages.”