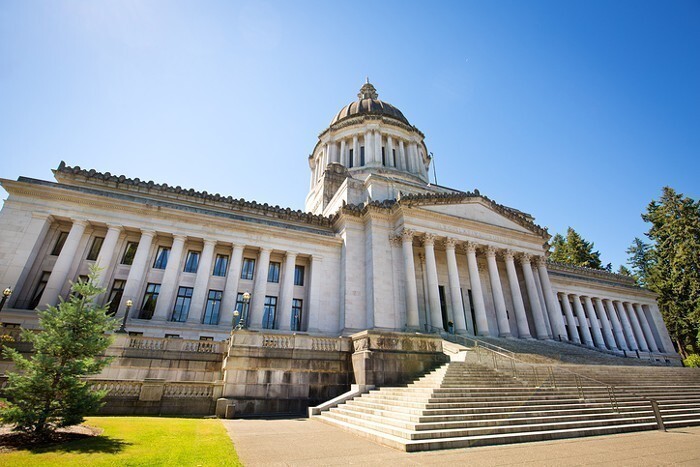 Good laws come from here occasionally. It'd be nice if they also made sure people knew about them. YINYANG / GETTY
Back in 2019, Washington lawmakers passed the New Hope Act, which overhauled the way the state treats people who complete their sentences following a criminal conviction. As The Stranger reported at the time, the new law expedited the process of wiping conviction records for those who remained crime-free for a period of time after re-entering society. At the time of passage, however, the burden of learning about the new rules in the first place and then navigating the court system afterward largely fell on the people with records.

Now, a group of volunteer software engineers, designers, and attorneys have worked together to make that reform more accessible. Clearviction, the brainchild of attorney Seamus Brugh and a team of several dozen other volunteers, launched earlier this month with the goal of making it easier for people to find out if they qualify for relief under the 2019 law.

Brugh’s own challenges in accessing housing, employment, and education following a conviction motivated him to take up the project. Without the ability to clear his criminal record in his home state of Indiana, he never would have been able to gain admission to law school and then become an attorney here in Seattle, he said in a video interview.

The process of clearing convictions is time-consuming and complicated, and it differs from state to state. Washington’s process, Brugh said, is theoretically open to a wider range of people than in other states, but practical challenges keep many eligible people from participating. The process involves a great deal of paperwork, and it also requires interacting with the same carceral web that the person just escaped, which can intimidate those who cannot afford to hire an attorney for assistance.

With the help of a nationwide team of volunteers connected to the project through a partnership with Democracy Labs, a nonprofit that helps Democrats bench-build and organize, Clearviction aimed to simplify that process by reducing that intimidation-factor.

The team began by asking both legal practitioners and people with criminal convictions about the hurdles that most commonly tripped up people. According to Brugh, that research made clear that the team’s first priority should be helping people discover that they’re eligible in the first place. Under the law, people must wait 5 to 10 years before becoming eligible to clear a record. Over that time, people tend to lose contact with prison-adjacent service providers who can help them flag convictions ready to clear.

But after a year-and-a-half in development, Clearviction now allows any person in Washington to use a simple step-by-step interactive tool to determine whether a particular conviction is eligible for vacation. The site also tells people which documents they need to gather, and it directs them to legal aid resources for assistance in filling out paperwork with the relevant court. Currently, the tool only works for misdemeanor convictions, though Brugh says it will expand to cover felonies next.

He stressed that the team designed the tool intentionally to avoid risking the security of any user’s personal information. While the site directs people to gather a significant amount of sensitive documentation necessary to vacate any conviction, it does not capture any of that information and does not store any data on how people answer the questions in the eligibility calculator, he said.

Clearviction is so serious about protecting user privacy that when I asked Brugh for some initial data on how many people had used the tool, he said the only metric they track is the number of website visits. He says traffic peaked at around 700 unique visitors when they launched the tool, with 40 to 50 new people visiting the site on an average day.

With the first version of the tool live, Brugh says Clearviction will now focus on raising awareness about the site and establishing partnerships with service providers such as Civil Survival, which works with returning citizens to incorporate the tool into their daily processes. He hopes that the efficiency of the eligibility calculator will help streamline their work and allow them to reach even more people who need help.

Personally, I think it’d be cool if the state didn’t rely on altruistic tech workers and nonprofits to ensure that people actually benefited from the laws it passes, but until that changes it’s on us to spread the word about the people filling the gap in the meantime.