Right-wing Fearmongering, Spineless Weaseliness, and Other Highlights from the WA Senate Town Hall 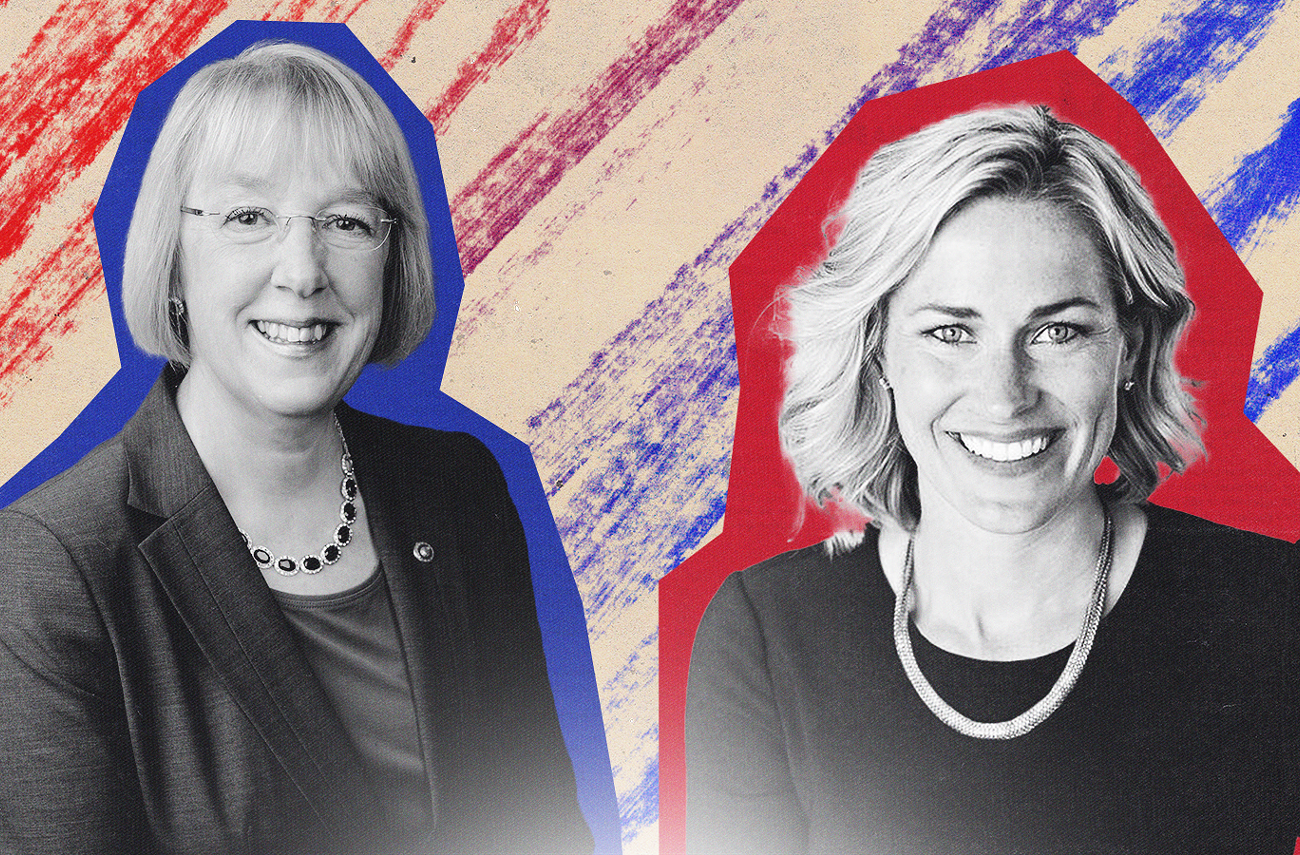 Patty Murray sounds like a senator. Tiffany Smiley sounds like she's auditioning for a job at FOX News. Anthony Keo

I’m gonna level with you, kid. Last night’s KIRO 7 town hall did nothing to restore my faith in democracy.

We have a 30-year incumbent, Senator Patty Murray, who is a decent Democrat. And then we have Tiffany Smiley, a Republican who will never miss an opportunity to spout a conspiracy theory peddled by FOX News or to use her husband’s war wounds to dodge a question.

In a functioning society free of the disinformation that pulls normal people into fucking QAnon, Murray would easily win back her seat. But, unfortunately, some pollsters no longer think she will blow Smiley out of the water. If by any chance you remain undecided, here are a few key moments from last night’s performances to help you draw a distinction.

KIRO’s moderators styled the evening as a town hall, where audience members asked questions of each candidate. One of the first questioners asked the candidates what the U.S. government should do to address rising inflation, which costs normal people up to 15% more on groceries.

Smiley immediately pointed her finger at President Joe Biden and her opponent, laying the blame for rising costs on their support for the American Rescue Plan, which spent $1.9 trillion to send $1,400 stimulus checks and hundreds of billions in aid to keep state and local governments afloat. Consider that line her official audition for the role of Dramatic Fox News anchor.

For one, the Biden plan came after Congress had already approved more than $3 trillion in relief under the Trump administration. For two, it's unclear how much the final package contributed to inflation. According to a comprehensive breakdown by Vox, conservative economists estimated the package added three percentage points to total inflation, whereas less conservative economists estimated one or two percentage points and argued that the right overplays the plan’s impact on rising prices.

I could excuse a little exaggerated blame on Democrats if Smiley had an idea to fix inflation, but she did not. Instead, she made some paranoid remarks about 87,000 IRS agents targeting the middle class, yet another debunked right-wing talking point that stemmed from social media disinformation.

Other than that, she really only promised to “rein in” wasteful spending. Her proposals to “rein spending,” however, would not save the feds a penny. According to her website, reining in spending means “ensuring that the government never pays able-bodied people more to stay at home than go to work.” Any expanded unemployment benefits have already expired, so that won't do anything.

To get a sense of where she’d make cuts, I asked Smiley where the government is wasting money right now. The first item on her list: harm-reduction programs that provide clean pipes and clean needles to drug users. Again, cutting funding to these programs would not save the feds money because the feds legally cannot pay for clean needles and pipes. But saying we do sure does sound scary to WASP moms who will spend their evening searching for fentanyl in their kids’ Halloween candy while they watch The Five with Jesse fucking Watters.

For her part, Murray promoted the recently passed Inflation Reduction Act, a trimmed-down version of the Build Back Better Act that will lower the cost of prescription drugs, health care, and energy. According to Forbes, independent research and even the Congressional Budget Office don’t anticipate that the bill will do much to lower inflation, but it could decrease the federal deficit by $100 billion over the next 10 years. Also, regardless of the effect on inflation, I would like to save money on health care.

Similarly, Murray said her next priority will be to lower the cost of child care. The Senator proposed child care assistance in the Build Back Better Act that would have saved families $5,000 to $6,000 a year. According to a press release from Murray’s office, her proposal would have saved a family of four making $151,000 in Washington about $164 per week on child care.

Letting Texas Take Away the Right to Abortion Is Freedom, Actually

We know the drill with Smiley and abortion. She’s not gonna answer a goddamn thing except to say she’s a spineless baby (fetus? clump of cells?) who wants the STATES to take away people’s rights so that she doesn’t have to take a wildly unpopular position before taking office.

At the town hall, a voter asked, “What, if any, limitations do you support on abortion, including late-term abortions?” Remember, people don’t typically carry a pregancy for months and months and then elect for a late-term abortion except in emergency situations. Just putting that out there. The “moments before birth” bullshit is just that–bullshit.

Smiley reminded the audience for the billionth time that she is personally pro-life but believes “there are good people on both sides” of the argument, which is the way she avoids talking about how she would actually legislate.

She added that she’s against an abortion ban and against codifying Roe v. Wade because abortion should be in the hands of the people. And by “people,” she means state government. If she wanted the people to decide on abortions, she would codify Roe, but instead she evokes the “freedom” of allowing a lower-level of government to exert power over all the uteruses within its borders.

The moderator clarified that the people actually don’t vote on abortion bans like the one in Texas, which state lawmakers passed. Smiley said, very poignantly, “they will bring it up and change the laws, the people will, in their state legislations.” So, basically, if you don’t like that your red state took away your rights, then you should run a referendum.

Murray used this moment to draw a distinction between herself and her opponent, who wouldn’t even address exceptions for rape and incest. When the moderator asked Murray to answer the question on late-term abortions more specifically, she said she wanted to codify Roe, which allows abortion until 23 or 24 weeks.

A Seattle-area high schooler asked, “Do you support President Biden's plans for student loan debt relief? If not, what would be your alternative plan?”

Murray said she agrees with Biden’s plan to forgive some student loans and said she commits to lowering the cost of college “so we don't find ourselves in this again.” She’s already started working on bipartisan legislation to make it happen, and she doubled the Pell Grant.

Smiley occupied the other side of the spectrum, saying it is “unfair” to use taxpayer money to pay for the tuition of others. She did not give an alternative plan. Instead, she went on a diatribe about how bad colleges were and how we needed to destigmatize not going to college. Good luck writing a law to combat classist beliefs about higher education rather than making it accessible regardless of wealth!

When the moderator asked again for an alternative plan, Smiley said, “Well, I also know a way to get free education in this country as well. And it's called service to our country.” It’s classic predatory high school recruiter logic: if you’re poor and want a college education, you better be willing to kill and die for our country.

Smiley Doesn’t Know What the Iran Nuclear Deal Does

Unprompted, while ranting about Ukraine, Smiley said that the US government needs to back out of “that awful Iran Nuclear Deal” and “stand with the women and the people of Iran.”

Smiley must be confused. Former President Donald Trump already pulled the US out the Iran nuclear agreement, which the adults call the Joint Comprehensive Plan of Action. More charitably, she might have meant she wants to back away from the table, where negotiations stalled a while ago.

But more importantly, she doesn’t have a grasp on what the deal entails. She said she wants out of the deal we are not in because Iran wants to “wipe Israel and America off the face of this earth” if they get a nuclear weapon. Whether or not that’s true, if she’s scared about Iran going after her two favorite colonial projects, then she should be for the deal. The  whole point of it is to limit the Iranian government's ability to make or keep nuclear weapons in exchange for relief from sanctions.

In saying she wants to stand with women in Iran on this issue, she echoes the sentiment from Seattle-area demonstrators, who want the US to end talks with Iran to reenter the deal and impose even more sanctions on Iran. However, other Iranian advocates argue that sanctions hurt ordinary, working-class Iranians by hurting the economy and stoking “the rise of authoritarian states, extremism, conflict, and deaths of innocent people,” according to advocates from No Sanctions on Iran. Also, recent research on this economic weapon reveals it to be a blunt tool with a low success rate.

When I asked Murray about her stance on the Iran deal, she said she supports Biden trying to navigate the “very difficult” diplomacy of reentering it. Her reasoning had nothing to do with the dangers of sanctions and more to do with the fact that she is also fearful of Iran becoming a nuclear state.

Still, she said she’s “proud of the women who have the courage to stand up in Iran and show the rest of us what they're fighting for. And it's incumbent upon us as leaders to support them. And I do.”

I guess Smiley stands with women who want sanctions (poorly) and Murray stands with those who do not (also kind of poorly).

That’s probably more than enough to help you make an informed choice by Election Day on Nov. 8. Today is your last chance to register online to vote. But you can still show up on Election Day to register and vote in-person.