Why Cliff Mass Is a Very Dangerous Weatherperson 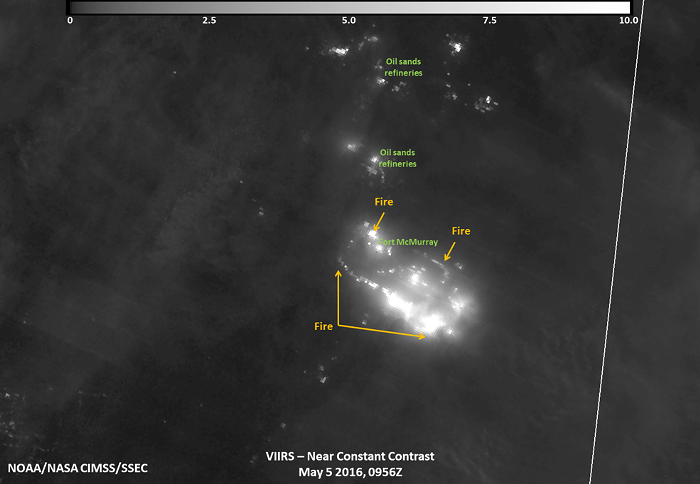 Is there an ultimate (rather than proximate) connection between that oil refinery and those fires? NASA-NOAA
Yesterday, I made the prediction that Cliff Mass, the local and popular weather blogger, would claim that there is no connection between the exceptional wildfires in northern Alberta and climate change. Others have; he would not. Sure enough, I was correct. He now has a post on Cliff Mass Weather Blog that, in his usual manner, admits the event is very unusual for the season, and then provides a scientific explanation for its unusualness, and concludes that, at this day and time, there is no hard evidence that it is caused by anthropogenic global warming. The French philosopher and speculative realist Quentin Meillassoux once said there is no God now, but there could be one in the future. Mass says something similar about human-caused climate change.


My criticism of Cliff Mass is often met with this response: He is a scientist, and you are not—therefore, I will take his opinion seriously and not yours, someone who knows little to nothing about this science. My answer to this sort of thinking is this: Yes, I'm not a scientist, but I have read my philosophy, and there is a branch in this ancient discipline that begins with Plato's cave. That branch is concerned with human ideology. Now, ideology is not a bad thing. It has its positive and negative sides and uses. Ideology is simply a cognitive mode for making imaginative sense of social, cultural, or natural phenomena. No one can escape it. You are always already in ideology.

In the way scientists observe the natural world, find patterns, and then explain them, philosophers/theorists observe patterns in culture, in language, and in immediate and deep semiological structure—and then formulate an explanation. This explanation needs to be consistent with observations and have some predictive power. An excellent example of this is a branch in the study of ideology that focuses on agnotology. What is going on here? Simply this: Agnotology is not the suppression of knowledge for the purpose of managing or directing or influencing public opinion. It is instead the very opposite: the inflation of knowledge for this very purpose. And it is important to understand that this kind of thing is not about debunking solid science with claptrap. No. What happens is the scientific finding or consensus is not discredited, but the public is asked to consider other scientific findings on the subject or field in question. The public is being encouraged to be skeptical like scientists. But what is this all about? Improving our understanding? Not at all. The goal is to replace certainty with uncertainty. And why is this useful to some groups or individuals in power? It delays political action. When you are in doubt, it is much harder to do something than when you are certain. This is what interests those who study agnotology. And some have even organized their findings into coherent theories that can explain observable trends or practices in human culture.

For example, Philip Mirowski, the author of the 2013 book Never Let a Serious Crisis Go to Waste: How Neoliberalism Survived the Financial Meltdown, theorizes that two movements always follow the initial manufacturing of doubt (agnotology in essence): promoting a solution that is not a real solution to the problem, and finally resorting to a solution that is in the far future. With global warming, we have these exact stages. There is first an increase of conflicting opinions and the encouragement of skepticism (this is where Mass steps in). It is actually right to be skeptical. This is doing the job of a scientist. This is contributing to a democratic discourse. The next stage, the solution that is not a solution, it is the advocacy of things like carbon tax or carbon trading (the source of the problem, the market, becomes the solution to the problem). As for the last stage, the leap into some kind of science fiction, it is geoengineering or a new industrial-grade carbon sequestration process that shows great promise.

Can we find an example of this last stage anywhere in our culture? Can we prove that those with an interest in keeping the world as it is (burning fossil fuels) are turning to science fiction to delay any real or meaningful action on climate change? Indeed, there is one published only yesterday in the New York Times: "Exxon Mobil Backs FuelCell Effort to Advance Carbon Capture Technology." As theorized by Mirowski, a central player in an industry that first replaced certainty with doubt on the science of climate change, and then presented a bunch of non-solutions, is now putting money into a "promising" carbon-reducing technology being developed by FuelCell Energy Inc. (science fiction). We do not know when this technology will enter the market or the size of Exxon Mobil's investment. And this doesn't matter because it's not about really solving the problem. It is about buying time so that more carbon can be released into the atmosphere at a handsome profit. FuelCell also provides the petroleum corporation with good publicity.

Now look at Mass's conclusion to the post on the Alberta wildfire:

The proximate cause of all this warmth and dryness? Here is the pressure (height) anomaly for the last 3 months in the midtroposphere (500hPa). You will notice very strong, small-scale, persistent area of high pressure (red color). The same ridge that gave us a wet winter and warmth. Why was the ridge there? At this point it appears to be natural variability, but perhaps someone may find a connection with human forcing. But that connection does not exist today.

What do we get of out this assertion, which is correct? Uncertainty. That will be the main mood. But why is certainty so important in this matter and uncertainty so harmful? To answer this, I need to bring up Pascal's Wager.

Blaise Pascal, a 17th century French philosopher and mathematician, famously argued that it was better to die believing in God with the chance of His existence than to die not believing in God with the chance of His existence. Pascal's reasoning: If you died and there was nothing, then fine, there is nothing (not much of a loss at all—in fact, you lived a pious life, you were kind, you loved your neighbor, you did not kill, you told the truth, and all of those other excellent Christian virtues). But if you died, and there was some higher power there, and you did not believe in it at all and were a wicked person in life, what a loss this is all around. Now we can use this reasoning today to see the limits and even the dangers of scientific skepticism in the context of climate change.

Why is it better to wager on a strong position on global warming than not? Because if one is wrong, if there is no relationship between human activity and, say, the fires in Alberta or the melting of polar ice or the winds that uprooted Seattle trees recently, are we worse off? No. In fact, our response to climate change would be walking more, using public transportation more, eating less meat, wasting less energy, and recycling as much of our material world as we can (all excellent urban virtues). If there is no climate catastrophe and everything goes back to normal, we would still have better cities and human bodies.

Now imagine if we take Mass's weak position, which is scientifically justified. Yes, no correlation can be established or proved between climate events and human activity—yet. Mass is absolutely correct in this. But what is the consequence of this wager if it is wrong? Are you feeling me? It would be a terrific loss all around. Yes, "in the long run we are all dead," Keynes once said. But the error of Mass's wager (and it is a wager) is, in the realm of life, far worse than the error of the strong position on global warming. His position might seem to him and others to be enlightened scientific rationality and caution but is in fact the night when all cows are black. (And, yes, I also know that Mass is not in denial about global warming; he only wants to state what is scientifically sound. But human response to global warming is bound to be weak or meaningless if no loud and definite alarms are rung.)

This is how philosophers think. It's not scientific, but you can see it is rational. Scientific skepticism could be, when other outcomes are considered, the more irrational position.

Are Cruise Ships Killing Seattle? It Depends How, Who, and When You Ask