The Race to Unseat Kshama Sawant Is Getting Expensive

Nearly half a million dollars has flowed into the Kshama-Sawant-focused race to represent Seattle City Council District 3, which covers Capitol Hill and the Central District. That's more than was spent when Sawant ran against Conlin in 2013 and more than any of the other district or citywide races so far this year.

Here are the totals of how much has been raised in each race so far:

By the way, remember how districts were supposed to make elections cheaper, meaning they'd be more accessible for first-time grassroots-y candidates? It's still unclear whether that will prove true in races where there is real competition. Those races are already catching up to the cost of citywide elections the last couple times around. Here are the totals from the last two years in which city council members were elected.

2013 (That expensive Position 2 race was Sawant vs. Conlin):

2011 (That expensive Position 1 race was Jean Godden vs. Bobby Forch): 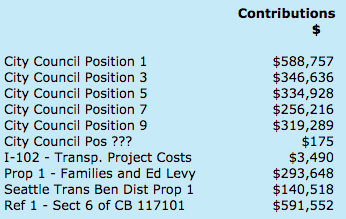 Sure, in the new District 6 (Fremont, Ballard, Mike O'Brien) and District 7 (downtown, Sally Bagshaw), the money is lagging far behind those citywide numbers. But the competition is pretty underwhelming in those two districts. Along with the big money in District 3, check out District 2 (southeast, Bruce Harrell) and 4 (northeast, Jean Godden). With more than $200,000 raised in those races before the primary, both of those races could reach the same levels of spending we saw in the citywide races the last couple times around.

Back to this year's council races. Where is all that District 3 money coming from? Turns out about as much is coming from outside the city as from within the bounds of District 3.

Sawant has raised a total of about $199,000. That puts her second only to current Council President Tim Burgess, who has almost $227,000, according to the state Public Disclosure Commission. Sawant's main challenger, Pamela Banks, is nearly keeping pace with Sawant at about $179,000, according to the PDC.

As shown in the super fun charts and graphs from the city's Ethics and Elections Commission, Sawant is killing it in the number of contributors department, with more than twice as many contributors as Banks. That, combined with the fact that Sawant's average contribution size is also less than half of Banks's, is sure to be fodder for the Sawant campaign's messaging that Sawant represents the interests of a mass movement. According to the campaign, Sawant's median donation is $50, meaning half of the gifts made to the campaign have been $50 or less. In the number of contributors, the next closest behind Sawant is citywide candidate and musician John Roderick, who has 929. 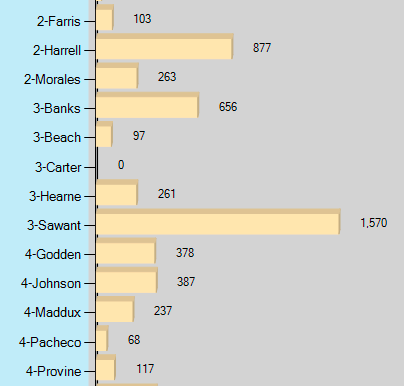 As I've pointed out before, Banks's contributors include Vulcan executives and real-estate interests. Add to that, as Publicola pointed out this morning, temporary Council Member John Okamoto and almost-ran ACLU lawyer Alison Holcomb and her husband. Sawant continues to see many of her biggest gifts from unions. She also has contributions from legislative aides in her council office, Casa Latina director Hilary Stern, and citywide council candidate Bill Bradburd.

Where's all that mad money going? The usual stuff: consultants, staffers, newsletters, flyers, yard signs, ads. While Banks has spent less than half of her cash (just $75,000), Sawant has spent almost all of her money (all but about $9,000). Speaking of Sawant’s spending, this spring some of the campaign’s consultants were being paid as independent contractors, allowing the campaign to avoid paying payroll taxes like unemployment insurance, and did not have the required business licenses. According to the Sawant campaign, nine employees are now paid a salary or hourly wages (meaning the campaign is paying payroll taxes for them) and two consultants remain independent contractors but now have business licenses.

Now, what about the other races? You can dig into your district or your favorite race—oh, do other people not have those?—over here. But here are a few things that stand out to me:

IN DISTRICT 4 (northeast, including the University District):

As Publicola noted, incumbent Jean Godden and her main challenger Rob Johnson are leading fundraising in this race, but Johnson had a much better fundraising month than Godden.

Both Godden and Johnson are getting significant chunks of their money from downtown, Queen Anne, and Magnolia (District 7), but Godden has more from District 3, and Johnson is seeing more from outside the city limits. Neighborhood activist Tony Provine has the highest portion of money from within the district, and Abel Pacheco has the highest portion (a whopping 64 percent) from outside the city limits. Provine's campaign is almost half self-funded, far more than the other candidates in that race. Michael Maddux has the lowest average contribution in the race at $98.

Incumbent Bruce Harrell continues to crush his challengers, with about $180,000 raised. Just 16 percent of that is coming from inside the district, though, as compared to 26 percent of challenger Tammy Morales's cash and 20 percent of his other challenger Josh Farris's money raised.

The two leaders in fundraising, Lisa Herbold and Shannon Braddock, have both raised around $60,000, but Herbold has more cash left on hand. Braddock has the highest proportion of money from within the district. Neighborhood activist Chas Redmond and lawyer Philip Tavel (who just got the Seattle Times' endorsement) are the two most heavily funding their own campaigns at more than 40 percent each.

UPDATE: Like Johnson in District 4, Braddock's campaign has benefited from a $44,000 independent expenditure from the Chamber of Commerce's political arm, the Civic Alliance For A Sound Economy, for advertising.

Almost half of the money flowing into this race is coming from outside the city limits, a higher portion than in any other race. Mercedes Elizalde and Halei Watkins are seeing the highest percentages of cash from within the district

Like District 1, this race has no incumbent; the leading fundraisers are former pastor Sandy Brown and attorney Debora Juarez with about $80,000 and $61,000 respectively.

An independent expenditure in District 5 earlier this week was to the tune of $48,000 from the National Association of Realtors in support of long-shot candidate Kris Lethin.

UPDATE: Juarez's campaign has benefited from an independent expenditure of $15,000 from the Northwest Tribal PAC.

IN THE CITYWIDE RACES (positions 8 and 9):

Unsurprisingly, incumbent Tim Burgess in Position 8 and Lorena González in Position 9 are the fundraising heavyweights in these races. González has raised about twice as much as her main competitor Bill Bradburd.

Bradburd has framed González as an establishment insider, and she is indeed depending more on cash from outside the city and District 7, which includes downtown, than he is. For example, the two have about the same amount of cash from District 3, but it makes up twice as large of a portion of Bradburd's backing as González's.

All three of Burgess's challengers are depending more on cash from outside the city than he is, particularly John Roderick, who has a decent regional and national following thanks to his music career and podcast. Roderick has the highest number of contributors and smallest average gift size in this race. June was another difficult month for Burgess's other main challenger, Jon Grant, who raised just $6,900 to Roderick's $16,300 and Burgess's $38,000.

None of the citywide candidates have, Sawant-style, already spent the overwhelming majority of their cash. Of his more than $200,000 raised, Burgess has spent only about $69,000.

Comments 15
Tags: News Blogs City
The Stranger depends on your continuing support to provide articles like this one. In return, we pledge our ongoing commitment to truthful, progressive journalism and serving our community. So if you’re able, please consider a small recurring contribution. Thank you—you are appreciated!
CONTRIBUTE NOW