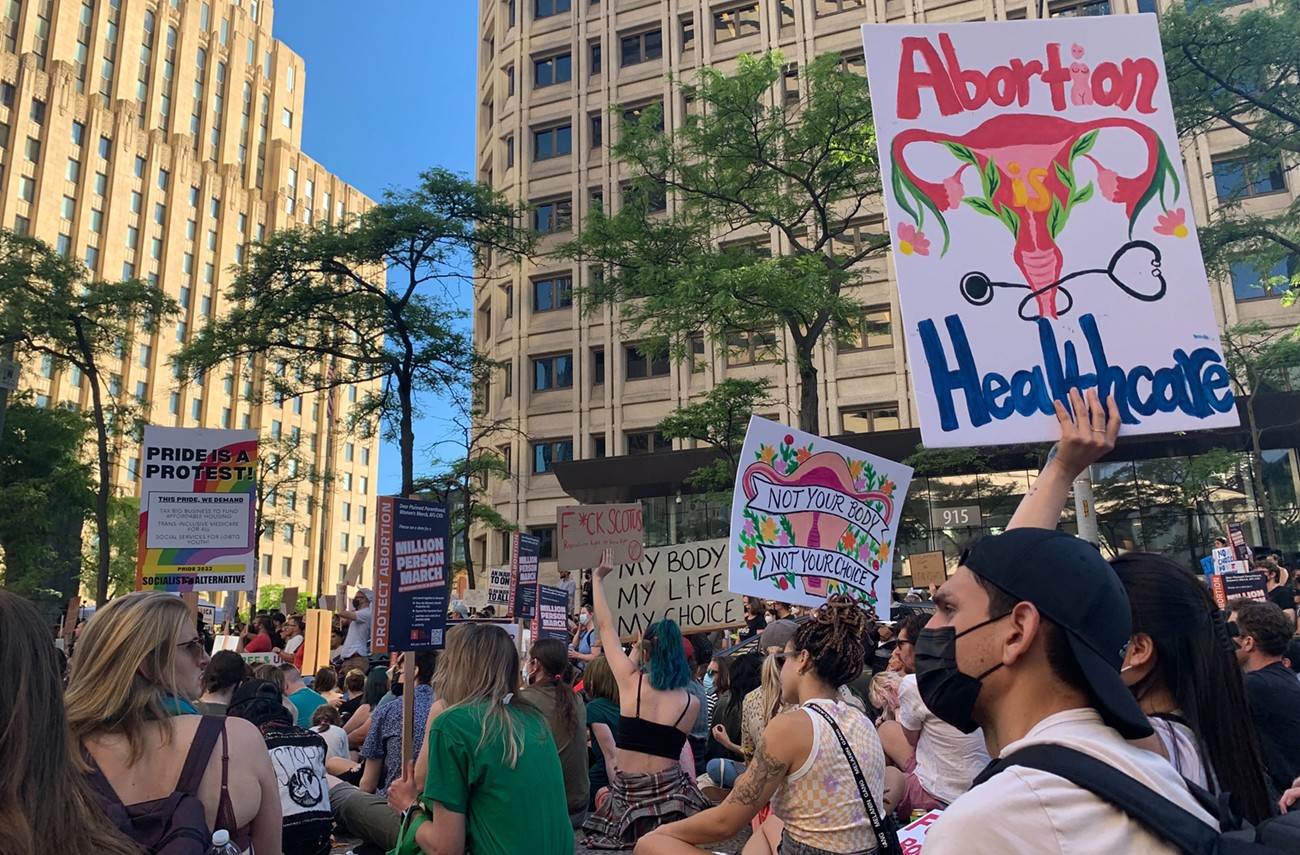 The Supreme Court’s decision to overturn Roe v. Wade ended the constitutional right to an abortion, but it will not end abortions. In fact, advocates and doctors say, it doesn’t have to end safe abortions, either.

“This decision from the Supreme Court needs to be met with absolute defiance from an enormous number of people,” said Amelia Bonow, the founding director of Shout Your Abortion, a campaign with the goal of normalizing abortion.

Bonow said the power to end pregnancies does not ultimately rest with the Supreme Court. That power remains vested in the people. She knows this because organizers in Texas already proved it.

The Texas Heartbeat Law went into effect last September. It banned all but the very earliest abortions and allowed individuals to bring civil lawsuits against abortion providers or anyone else found to "aid or abet" illegal abortions. For extra measure, anyone who successfully sued someone under the law could collect a $10,000 reward.

The law halved the number of legal abortions conducted in Texas, but two studies showed that the total number of abortions among Texas women only fell by 10%, according to the New York Times.

Bonow said that denying even one person bodily autonomy was a tragedy, but she argued that Texas organizers relied on out-of-state procedures and abortion pills to maintain 90% of the state's previous access to abortion, which served for her as a model for other states dealing with bans now, and also as a lesson in solidarity in the face of laws intended to “make us afraid to help each other.”

She called for that kind of solidarity to address the continued need for abortion alongside protesters demanding that politicians act to protect the right to choose.

“I'm not trying to suggest that we give up on trying to make change within political or institutional avenues, or that mutual aid is the only option,” she said. “But right now, the easiest, most low-hanging fruit is circumventing the barriers the Supreme Court props up.”

The best way to circumvent those barriers right now, Bonow said, is sharing information about safe, self-managed abortion. After all, when the Heartbeat Law ended much of Texas’ abortion access, the number of women who ordered abortion pills online each month tripled compared to the number of monthly orders made before the law.

Abortion pills are safer than Tylenol

Abortion pills, also known as medication abortion, are an effective, FDA-approved way to terminate a pregnancy. The National Women’s Health Network called the pills safer than Tylenol. They can cost anywhere between zero dollars and $600.

Medication abortion can terminate a pregnancy up to 10 weeks from the first day of your last period. For perspective, that timeframe encompasses about 79% of all U.S. abortions that occurred in 2019.

Dr. Emily Godfrey, an obstetrician-gynecologist at UW medicine, said researchers may soon find that the pills can end pregnancy with a lower success rate later into gestation. If the pills prove effective for four additional weeks, then they could manage all but 7% of the abortions in the U.S. that happened in 2019.

A medication abortion typically happens in two rounds. First you take mifepristone, which blocks the body’s progesterone and stops the pregnancy from advancing. Then, six to 48 hours later, you take misoprostol to induce cramping, bleeding, and the emptying of the uterus.

“I just really want to emphasize that self-managed abortion with abortion pills is safe. The only thing that makes it unsafe in this day and age is the criminalization,” Godfrey said.

How to get the pills

In the United States, misoprostol is much easier to come by than mifepristone. It’s available with a prescription at any pharmacy, and OBGYNs prescribe it to induce labor, treat miscarriages, or even just to soften the cervix for an endometrial biopsy or an IUD insertion.

By contrast, only two mail-order pharmacies in the United States deliver mifepristone, and you still need a prescription to get it. Even if you can find a doctor willing to prescribe the drug, that doctor may not have the power to do so.

In order to prescribe mifepristone, physicians must sign up in a database and seek certification from the two companies that deliver the medication. Doctors who work for religious hospitals or hospitals that receive federal funding cannot seek a certification. Godfrey said no public record of certified physicians exists, but she knows that many UW Medical locations, including the family planning clinic on Roosevelt, the primary care clinic in Northgate, the OB/GYN clinic and the family medicine clinic at Harborview offer the medication.

Luckily, taking misoprostol alone works as a safe and effective abortifacient, Godfrey said. Without pairing it with mifepristone, however, the drug may cause more cramping and bleeding.

If you can’t get to a clinic, the website Aid Access provides the easiest way to find abortion pills. After you fill out a form, clinicians from the U.S. will send you pills if you live in a state where it is permissible. If you live in a state that prohibits abortion, a clinician from outside of the U.S.–and thus outside of the state’s purview–will send you the pills.

You can find similar access at Choix, Just the Pill, Abortion on Demand, and Hey Jane.

Those who choose to self-medicate or to help someone else do it should remember that bleeding and cramping are normal, but those symptoms should only be about as painful as a bad period, Godfrey said. You can treat the pain the same way you would treat period cramps – Ibuprofen, Tylenol, or heating pads tend to help. Hydrate to ward off dizziness.

Godfrey also recommends you use pads instead of tampons, and if the bleeding fills up two pads in an hour for two hours in a row, then go to the emergency room. If after 24 hours you do not experience any bleeding, she recommends consulting a doctor in case of an ectopic pregnancy.

Aside from sharing information about how to have a self-managed abortion, there are also ways to help people seeking abortions at clinics outside of their home states.

In Washington, political leaders made it clear that they will protect the right to abortion and also protect those who come to Washington seeking care. Because of these pro-choice laws, Northwest Abortion Access Fund (NWAAF) expects people to continue flocking to Washington to receive care. And when those people come, Cyndy Wilson, a board member at the fund, said they will need all hands on deck.

NWAAF has experienced a huge surge in volunteer interest, so coordinators are now at capacity for onboarding new hotline operators. But Wilson said she hopes people will remain patient and engaged, because NWAAF will need their help sooner or later: “This is not something that’s happening just right now. We’ll be dealing with this for a long time.”

Wilson said you can still sign up to drive someone to a clinic or to let someone stay at your home. NWAAF stopped offering rides and lodging during the pandemic, but in the last couple of months the organization started rolling out those programs again. The return couldn’t have come at a better time. People are hungry to help on social media, particularly on TikTok, where many users have shared that their home is open if anyone *happens* to need a place to stay.

Bonow did not recommend staying with strangers without doing some kind of screening. NWAAF fills that role, conducting background checks to make sure both parties are safe. The fund also trains volunteers specifically to help people in this vulnerable position.

NWAAF prioritizes Spanish-speaking volunteers to operate the hotline, to drive, or to offer “homestays.” To account for the ongoing pandemic, Wilson said NWAAF prioritizes “homestay” volunteers with “no-contact” spaces such as mother-in-law suites or private units with separate entrances.

If you don’t have time to volunteer, Wilson said you can donate to NWAAF here.

If you don’t have the money to donate, then you can push your local representatives to donate to the fund. At a rally earlier this month, Councilmember Kshama Sawant commended mutual aid efforts, but she insisted that governments at all levels should foot the bill for abortions. So far, King County and Seattle have committed to giving the fund $500,000 and $250,000 respectively.

But before you make your place a safe house for abortion seekers, or give half your paycheck to NWAAF, Bonow encouraged people to proceed thoughtfully.

“We are going to be entering a time when people are criminalized for either ending their pregnancy or attempting to or helping other people to do that,” she said. “And inevitably, those people will be poor folks, marginalized people, undocumented people, people of color, and it's on every person to do their own individual risk assessment.”

If you feel like you’re on shaky legal ground, she recommends that you call ReproLegal, a helpline that can answer specific legal questions.

In whatever way you can help, Bonow said the movement needs you.

“We can continue to live in a country that still has meaningful access to abortion if we commit to that as a collective project,” she said.