A State Law Might Be Helpful to Make That Clear, Though 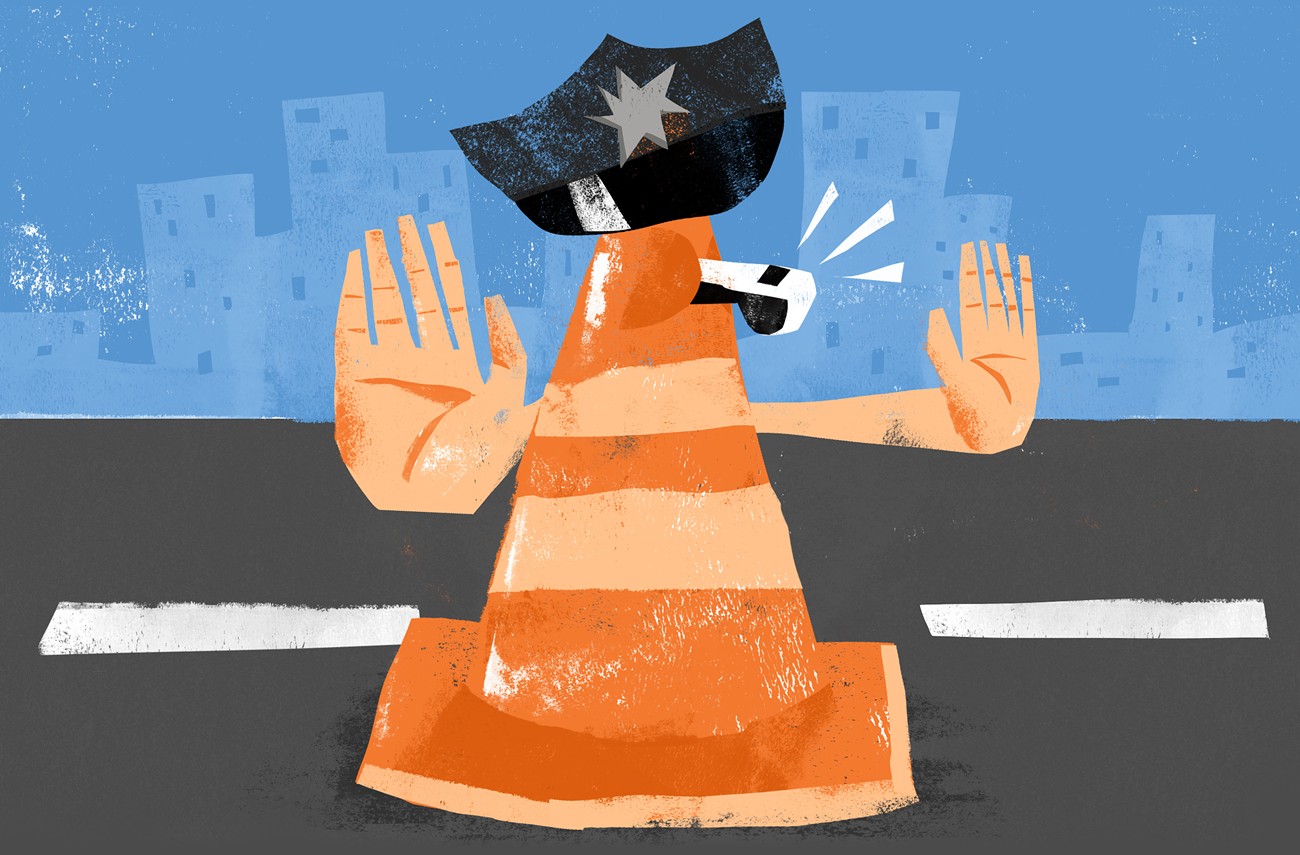 There are better ways for SPD officers to use their overtime hours than serving as glorified traffic cones. Tyler Gross

In order to reduce the strain on Seattle’s overworked and understaffed police department, the Seattle City Council wants to use civilian Parking Enforcement Officers rather than sworn officers to direct traffic at large public events.

Though Seattle Police Department Interim Chief Adrian Diaz agrees that using cops for that work “makes our officers tired" and "has an impact throughout all our operations,” as he mentioned at last week's public safety committee, the cops have been slow to embrace state and local efforts to ease this burden on departments. Their stated reasons for caution, however, don’t hold water.

Chief Diaz Clashes with the City Council over Traffic Enforcement

In the latest attempt to slow-roll this policy, at last week’s public safety committee Chief Diaz pushed back on the council's plans, claiming “there are some legal requirements we have to be involved with due to Homeland Security requirements that a certain radius has to be secure.”

After multiple requests for clarification over the course of a week, the department declined to name the specific “legal requirements” that weighed so heavily on Diaz’s mind.

Though a few potential obstacles that I’ll discuss later do exist, no one at the Department of Homeland Security, the State Legislature, or any of Seattle’s stadiums could point me to a law or code that “requires” local law enforcement to serve as traffic cones.

DHS “Requires” Cops to Serve as Traffic Cones – or Do They?

The DHS publishes two regulations regarding security at large public events. Both reference local law enforcement as one possible way to provide security, but neither explicitly requires venues to choose uniformed cops as their only means of providing security.

In accordance with a federal law called the SAFETY Act, large venues typically develop their own safety plans, and then they consult a local program specialist with DHS’s Cybersecurity and Infrastructure Security Agency (CISA) to evaluate and certify the plan.

CISA publishes a list of best practices for venues to consider while developing those plans, but none of those suggestions carry the weight of a legal requirement. Instead, the agency categorizes suggested policies as “strongly recommended,” “recommended,” or “suggested.”

Paying a cop to direct traffic counts as a “recommended” best practice, but in its publicly available materials the agency does not offer guidance on the size of that detail. Instead, since each stadium and its surrounding neighborhood present unique security concerns, venues make that call on a case-by-case basis.

Under this process, the venue–not the Department of Homeland Security–sets the number of officers it needs for each event’s safety plan in its contracts with the police department.

The other possible DHS requirement-that-isn’t-actually-a-requirement at play here involves a Security and Resiliency Guide that the DHS Office for Bombing Prevention publishes to help venues prevent terrorist attacks.

That guide recommends that venue security staff establish a security perimeter to keep prohibited items away from the stadium’s gate or other areas where people congregate, which mirrors Diaz’s language about securing a “certain radius” around stadiums. But those same recommendations expressly acknowledge that keeping that perimeter secure doesn’t necessarily need to involve law enforcement officers.

According to the guide, a security perimeter can be “a physical barrier with entry points for access” or a virtual barrier “established by the presence of appropriately trained staff or security professionals.”

So, while having a law enforcement presence onsite to respond to an active shooter or bomb threat seems reasonable, no DHS guidelines require uniformed cops to direct traffic.

While DHS “requirements” may not set any clear rules on the number of cops needed to staff large events, a vague state law could still stymie the Council’s plan to take this important but menial task off the plates of highly trained officers.

That state law makes the act of ignoring an instruction from a “traffic or police officer” a misdemeanor crime. However, the law doesn’t expressly limit the authority to give those instructions to someone with a gun and a badge.

Last year, that confusion led State Senator Rebecca Saldaña (D-Seattle) to introduce Senate Bill 5354, which would have cleared up this whole mess by explicitly giving civilian flaggers the authority to direct traffic as part of a safety plan developed by the City of Seattle. Seattle City Councilmember Lisa Herbold testified in support of that bill, saying that it would allow the City to use its policing resources more efficiently.

Beth Knox, president of the Seattle Sports Commission, a group that lobbies on behalf of venue operators such as the Seahawks and the Kraken, also testified in support of the bill. In her view, clarifying the state law would give large venues both “flexibility” and “certainty” in how they craft their safety plans amid local and nationwide police staffing shortages.

That bill died in committee this spring, but that doesn’t necessarily mean the Council’s plan to use civilian Parking Enforcement Officers for this work died along with it.

When the bill was introduced, a City of Seattle lobbyist told Sen. Saldaña that the City’s reading of the ambiguous law didn’t prohibit the use of civilian flaggers to do this work. In fact, before she introduced the bill, the City already planned to move ahead with changes “to make it easier to deploy non-police flaggers.”

While the ambiguity might have given City leaders enough confidence to move forward aggressively on the Council’s plan, they’ll still need to convince the venues that actually develop those safety plans to adopt their reading of the state law at issue. According to Senator Saldaña, those large venue operators want the clarity in state law offered by her bill.

It’s still possible that the Council and other policymakers in City Hall could bring those enormous private corporations around to their way of thinking, but until they do, or until Sen. Saldaña’s bill passes, then our overworked police officers will continue to spend their precious overtime hours pointing at cars instead of patrolling the streets or investigating serious crimes.