hahahahahahhahah god, those suction cups are so…visible Getty Images
I don’t remember a time in my life when I wasn’t obsessed with food vids.

It all started with Food Network’s 1990s roster of “stand and stir” star chefs. Mom and I would watch Emeril Live religiously, I think because she liked his accent and I liked jokes about garlic, but probably mostly because he was a more charming version of her horrible husband. As anglophiles adrift in a humorless midwestern town, we both loved the unbridled enthusiasm of Jamie Oliver’s Naked Chef and the understated wit of the Two Fat Ladies. On the other side of my immediate family, every other weekend Dad and I would crack Diet Cokes and switch on Iron Chef to watch two teams of chefs wrestle live octopuses out of tanks. Then we'd marvel at the artful dishes they could create in Kitchen Stadium, a place for which I still hold no small amount of reverence.

Ina Garten’s Barefoot Contessa introduced me to the alien world of American Old Money and “good vanilla.” Though I now basically reject Alton Brown because I resent the way he used science as a shield against his mediocre recipes, his show Good Eats filled the Bill Nye-sized hole in my heart. I loathed Bobby Flay’s machismo and his constant use of honey in place of sugar, but I watched him all the time because his food actually looked good (and now, of course, I have no problem replacing sugar with honey). And while we’re on the subject, though it ran on the Travel Channel, I loved No Reservations for the insider travel stuff, but I frankly didn’t care for Anthony Bourdain’s overdetermined bad boy character (sue me!!).

As I aged, the genre exploded all over Youtube. Food TV morphed into the food vid, and I grew to love every permutation. The “hands and pans” show, the game show, the gimmick show, the cold tutorial, the quirky tutorial, the mock tutorial, the low-rent amateur show (mostly to luxuriate in different accents), and the food history shows. 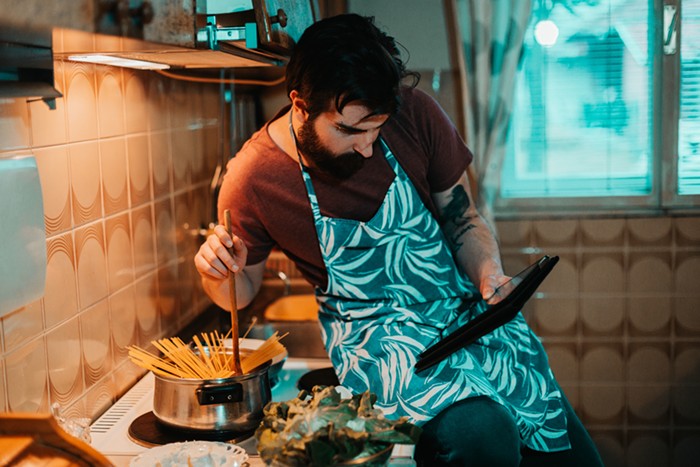 A portrait of the author cooking while stoned. Getty Images
Did I cook even as little as 1% of the recipes I watched the chefs make? Absolutely not. Do I know why?

Maybe it’s because *takes a huge bong rip* I wasn’t watching for the recipes so much as I was watching for the semblance of domestic bliss the shows projected, which filled the emotional cracks left by my *blows out a huge cloud of smoke* broken home.

Or maybe it’s because I do cook some of the recipes, and the vids create more trust than, say, a cookbook or a random recipe online. I can see more steps in the process, which brings more certainty to the high-risk and highly uncertain act of cooking a new dish for myself and others! Or it could be a little of both!

In any event, and more to the point of this column, my lifelong observation of food television revealed a little vein of vids that I watch almost exclusively while stoned.

AlmazanKitchen. Absolute libidinal food porn. On this part-survivalist part-ASMR food channel, a man and his pet owl (Mr. Ramsay) cook gourmet meals on open fires near Serbian streams using Serbian knives and pans, plus the occasional Rube Goldberg rotisserie machine. As is common in “hands and pans”-style cooking shows, the chef stays out of the spotlight. He doesn’t talk, and he often doesn’t show his full body on film. Most of the personality comes from slightly deranged text bubbles attributed to the owl. (In one video set on the snowy banks of some creek, he holds up a root and quotes the owl saying, “Only frozen horseradish for now :( ”). The focus here is on the look and sound of cooking food—the crackle and pop of oil frying a spatchcocked chicken, the caveman thrill of grinding salt and herb into stone, the mesmerizing glow of a fire.

Townsends. I am never going to wrap day-old raisin oatmeal pudding in a cloth and boil it in a large pot in my fireplace, but I will certainly smoke a spliff and watch a man wearing 18th century costumes do it. Townsends strives to “savor the flavors and the aromas of the 18th century,” showing viewers how to cook foods from that era using the tools from that era. This man grates nutmeg into everything, smashes up scotch collops, whisks eggs with a bundle of sticks—and you better believe he sells the stick whisk online. The real joy of the show, aside from the historical tourism, is waiting for the moment when he finally reveals himself as the leader of an insane cult of historical re-enactment actors, which feels like it could happen any episode now.

Maangchi. Maangchi is the exception to the rule here, because I actually do cook a fair number of her dishes, but I recommend stoned viewing in her case due to the surprising, devilish humor that comes through in her text overlays. One example among thousands: as she peels the skin off an octopus and turns its head inside out, some text appears on the screen: “Such a nice pouch! :).” That emoticon smile as she accomplishes this somewhat gruesome act—her hands covered in mud and ink—is just incredible. And later on, as she lowers the octopus into the boiling water, she imagines the creature saying, “‘Maangchi, I want to get a gentle perm.’ :).” Again, that smile. Anyhow, her confident aunt energy is powerful enough to break the spell of couchlock and get you in the kitchen, where you can cook up some of her simple and delicious snacks.

The Last Word: A New Column about Cocktails!