A report from black midi's concert at Neptune Theatre

People are nuts about black midi, and that's encouraging to folks who like to see loud, complex rock music get some shine. Lisa Hagen Glynn

Witnessing black midi send the sold-out Neptune Theatre crowd into states of ecstasy and agony over 70 minutes on a Monday night, I thought of a famous quote by King Crimson drummer Bill Bruford: “King Crimson were the only band in the world who could play in 17/8 time and stay at 5-star hotels.” In other words, the commercial success London's black midi have achieved just two studio albums into their career is startling.

The London quintet make anything but easily palatable rock for tech-industry normies to check their stocks to. black midi's trigonometry-friendly music spends nearly all of its time marauding around the room with volume set at 11 and intensity at vein-bulging levels. These songs shake you by the shoulders and shout into your face, “LISTEN TO ME, MATE! WE'RE RIDING THE FOOKIN' ROLLER COASTER... WITH NO GUARD RAILS!”

So, it made sense that black midi commandeered the stage after a boisterous, boxing-announcer-style intro followed by the incendiary strains of Jimi Hendrix Experience's “Fire”—to which they played along before bursting into their first song proper, “953.” (I wonder if the band tailor this approach to each city in which they perform. Do they go on to the MC5 in Detroit? Pixies in Boston? Hüsker Dü in Saint Paul? Etc.) 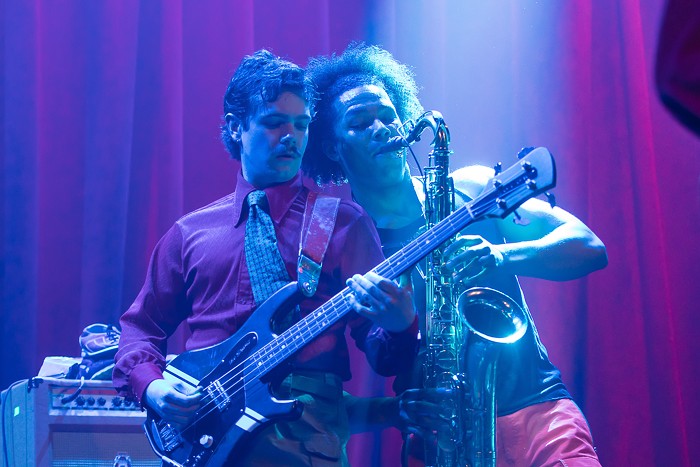 Ordinarily, any group trying to follow in the Experience's wake are setting the audience up for disappointment. But the applause black midi triggered after each of their 15 songs was easily the loudest response I've heard in years. People are nuts about black midi, and that's encouraging to folks who like to see loud, complex rock music get some shine. black midi also inspired one couple to ballroom dance to the melodramatic bit of “Ascending Forth”—not something you see every decade at rock shows.

Generally speaking, black midi's songs are about power and precision—but mostly power. They often follow that familiar loud/quiet/loud pattern, but they're mostly loud. They often like to crank the intensity to apocalyptic heights and then quick cut to silence, only to allow a single instrument to tickle the air poignantly before everyone storms back to full-on attack mode. It's an effective methodology. 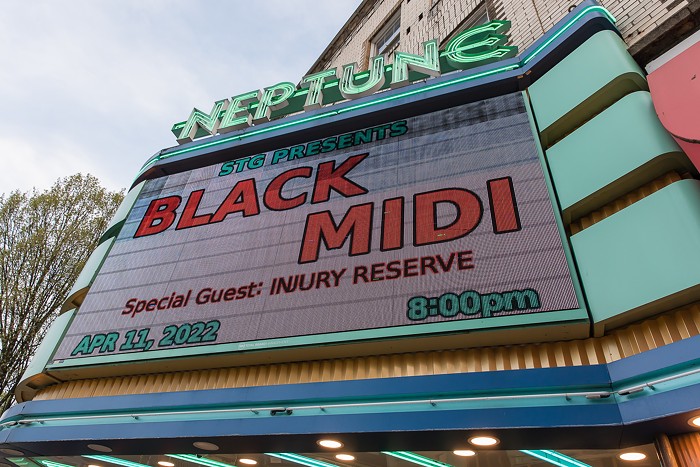 When black midi stray into ballad territory, they tend to get maudlin. While singer Geordie Greep strives for operatic grandeur and show-tune pomp, he just doesn't have the pipes to pull it off. His vocal talents are modest—gruff sprechstimme à la Protomartyr's Joe Casey, blue-collar croon—and if black midi were to go totally instrumental, it probably wouldn't dramatically diminish their fanbase.

What's clear from the get-go is that black midi's members are showboating yet disciplined acrobats of sound. (Bassist Cameron Picton and saxophonist Kaidi Akinnibi frequently sparred in mock battles throughout the set.) black midi have become—whether intentionally or not—the King Crimson and/or Mahavishnu Orchestra of their generation. It's an ambitious gambit and, against great odds, it's paying off in concert sales and streaming stats (301,296 monthly listeners on Spotify)—impressive for a group whose best song is titled "Chondromalacia Patella." These musicians—including Greep (guitar), Morgan Simpson (drums), and Seth Evans (keyboards)—boast the chops, passion, and endurance to create complicated compositions that enthrall the masses in a manner not seen since the early/mid '70s, when prog-rock and jazz-fusion artists could fill arenas.

However, when 89 percent of your set simulates the cataclysmic climax of King Crimson's “21st Century Schizoid Man,” it can make one numb to the overstimulation after a while. I'd vote for a slight lessening of the molten intensity that is black midi's default setting, but I am clearly in the minority here. The many folks clamoring "one more!" after Neptune's staff flicked on the house lights and started playing Angelo Badalamenti's “Laura Palmer's Theme” proved that. 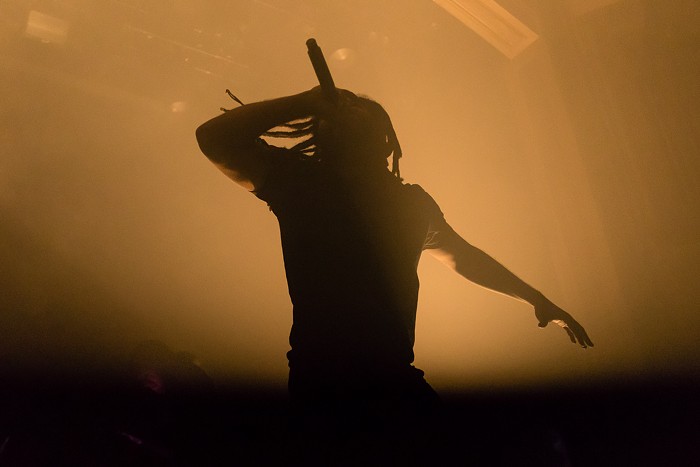 My cursory research of opener Injury Reserve led me to expect a mumble-rap duo delivering laid-back head-nodding. Uh, no. What Injury Reserve producer Parker Corey brought instead was something more akin to Dälek or DJ Muggs—extreme gothic doom vibes with nods to manic, Squarepusher-esque IDM, experimental techno, and avant-noise blurt.

The music clashed with MC Ritchie With a T's often Auto-Tuned emo singing. IR sounded best when the raps flowed like torrents of urgent messages competing with and feeding off the sonic maelstrom. I could only discern about 10 percent of Ritchie's words, but his voice recalled Disposable Heroes of Hiphoprisy leader Michael Franti's. IR's heroic last track, “Bye Storm,” contained a big ol' sample of Brian Eno's “Here Come the Warm Jets,” so bonus points for that.

Also, respect to whoever was playing cuts by Tony Williams, Max Roach, Pharoah Sanders, and Wayne Shorter over the PA before and between sets. A++ selections. 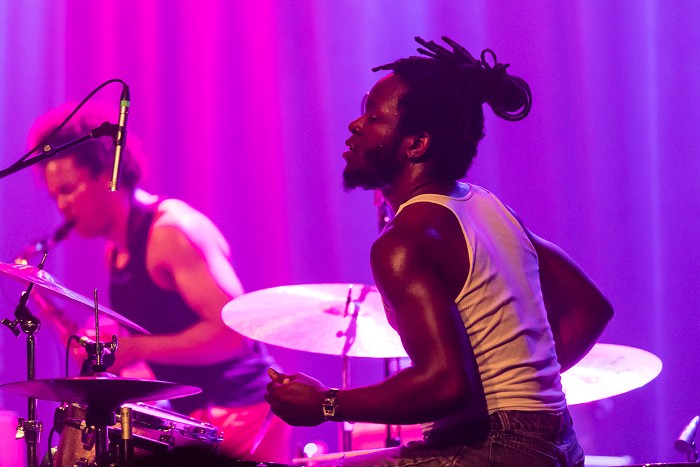 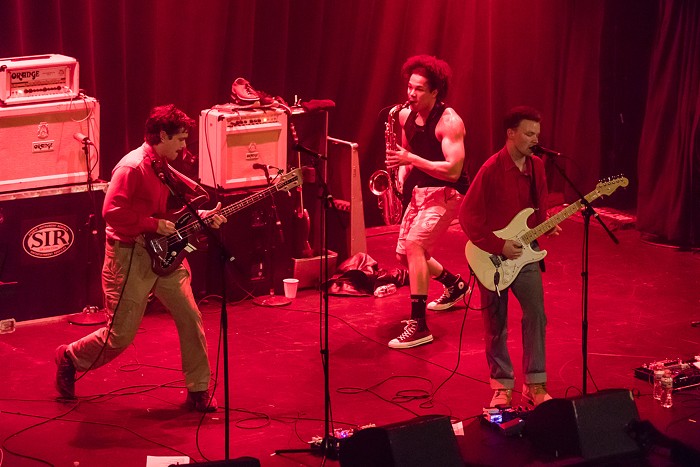 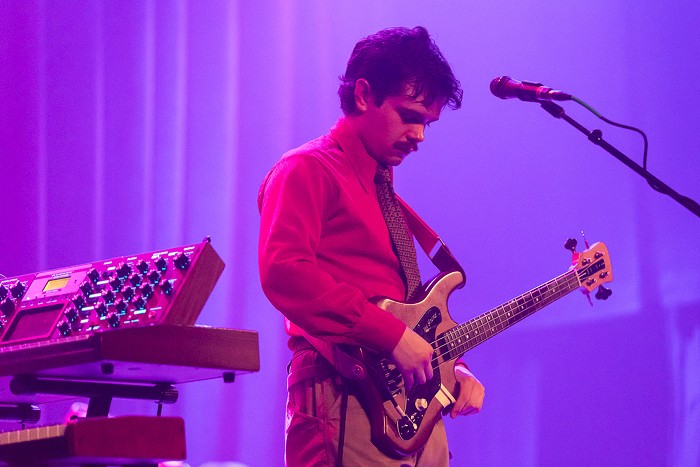 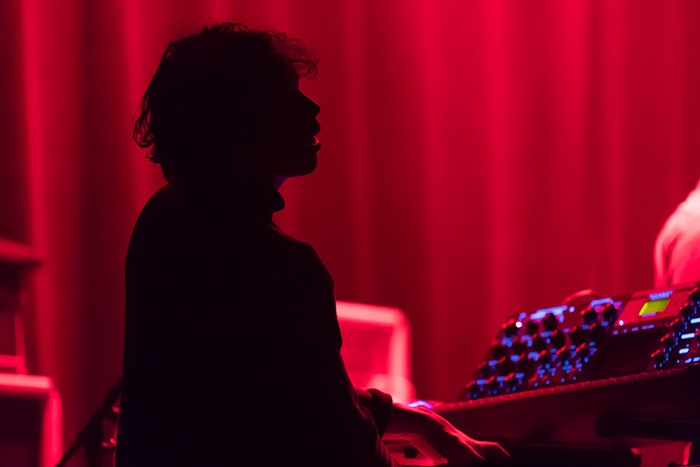 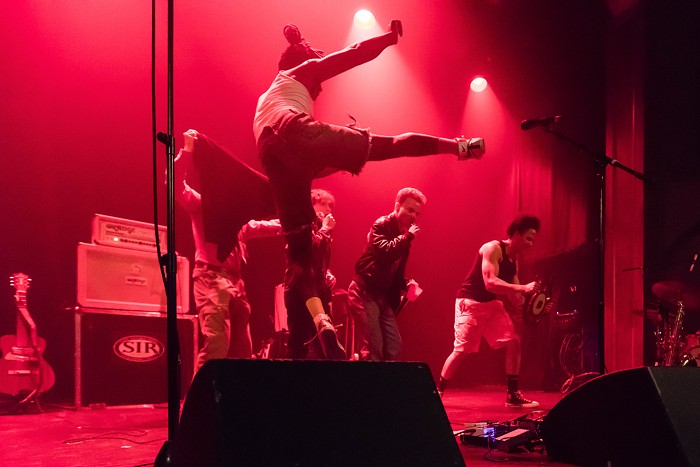