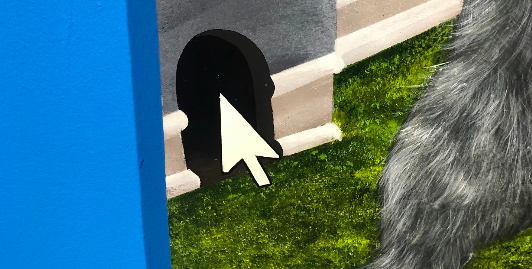 Each of these artists' pieces fall loosely within the genre of post-analog art. That term, post-analog, comes from an understanding of the effect that the digital (meaning artificial intelligence, computers, the internet) has had on the art of image-making. Each artist presented here grapples with this meeting of the human hand and technology as we understand it today. Anthony contextualizes his interest in this genre of art against the background of the rapid acceleration of artificial intelligence's ability, efficiency, and knowledge, specifically in overtaking human jobs.

"This style of painting reminds me that we can mimic the machine just as well as they can mimic us," he writes to me over email. "It's interesting growing up with the internet, not in the internet—a little of both I guess—because I have gotten so used to seeing very specific marks or gestures that I always associated with Photoshop or Microsoft Paint, and when I first came across 'post-analog' work I was struck."

This awe came from the fact that post-analog work is not made in a computer program, a digital collage, or by a 3D printer, but using "traditional" methods and tools of painting. Like Anthony's own fantastic paintings, you can see the hand in how it comes together, which is part of the fun and interest in post-analog art.

(FYI: The paragraph below is actually the title of the painting above.)
"Manet, according to some art historians, was a really fun and interesting painter which I'm sure is the case if you happen to find having your pants pulled down in public fun and interesting. he is known for loving lunch — his favourite kind was lunches where he could show off his willy and boobs to unsuspecting friends and make them drink his special drink that he liked to call art juice. not many people really like his lunches which is why he's not really regarded as a really great artist. jeff koons was apparently a regular at these lunches an couldn't get enough of the art juice.", 2018
OK—does this kind of look familiar to you? The setting? The positioning of bodies? Does the name, Manet, ring any bells for you? The Dublin-based artist Philip Gerald is visually referencing French artist Édouard Manet's "Le Dejeuner sur l'herbe (Luncheon on the Grass)," 1863. That painting is historically important for many reasons, but this isn't Art History 101, I don't have a PhD, and I've got shit to do!


What makes Gerald's work so great, so post-analog, is the method used to create it. Anyone who was fortunate enough to live during Microsoft Paint's heyday can recognize the thick, chaotic lines that make up Gerald's image. It looks as if it were painted using a mouse on a PC in the school computer lab during your class's typing lessons. But it's not. Upon closer inspection, you can really see the hand in Gerald's "Manet, according to some art historians..." So, again, we are as much marveling at the work itself as we are marveling at its path to creation. Our understanding of it also relies on our knowledge and encounters with this type of readily available technology, MS Paint; it's humor, our unskilled use of it. Though Gerald's lines are messy, anyone who has tried to do their own self-portrait on Paint knows how fucking hard it is. This was easily my favorite piece in the show.

"Manet, according to some art historians..." closeup Jasmyne Keimig

Yahtzee, 2018
Trey Abdella's "Yahtzee" is a fever dream of a painting. It references Tom from Tom & Jerry, mixing both realistic depictions of fur with flat cartoonish ones that mimic the program itself. The post-analog bit comes with Tom's left hand, "erased" or cropped out in a style that's a reference to the process of Photoshop. And in the bottom left-hand corner where we might see Tom's adversary Jerry, we instead see a "mouse"—another gesture to post-analog operations. Abdella seamlessly blends the analog and the digital, making art that's most legible to a generation that has straddled both methods of representation. Detail from "Yahtzee" Jasmyne Keimig
Ultra Light Beams is a remarkable show and worth seeing in person. The space has been totally transformed by Bobby Haulotte, who also has artwork featured in the exhibition, into a day-glo, optical illusion reverie. This Friday, Mount Analogue will host While Supplies Last from 5-9 pm, a one-night only event where anyone can buy $30 original works on paper from over 300 artists while supplies last. The show itself will be up until February 26th. Come through.