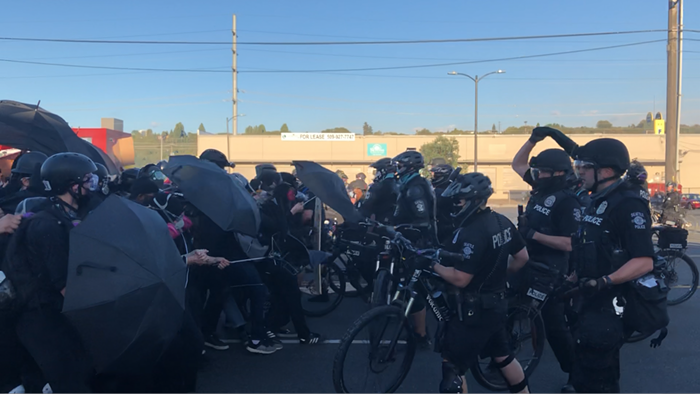 SPD does not like the umbrellas. RS
On Monday evening a large group of bike cops rushed about 200 protesters outside the Seattle Police Officers Guild headquarters in Sodo while Big & Rich's 2004 pop country hit "Save a Horse (Ride a Cowboy)" blared from the building's speakers.

Colby Williams, a member of the Black Indigenous Coalition, said he was standing on frontlines when officers rushed in.

"At that point, nobody had damaged the building or spray-painted it," Williams said. "This was a peaceful march; no property was damaged on the way to SPOG or on the way back. We actually had some people picking up garbage as we marched." Malcontentment Tango's stream captured footage of one protester tossing a black garbage bag over the fence surrounding the building as cops moved in around the corner.

From my vantage, after police started snatching make-shift shields and umbrellas from protesters, someone in the crowd set off a fire extinguisher, and then the chaotic scene escalated.

As you may have seen, at 6:21 a large group of cops bullrushed protesters outside SPOG HQ. They split the group, made arrests, deployed blast balls, pepper spray. Cops continued rushing crowds from SODO all the way now to Rainier and Dearborn. pic.twitter.com/st6YSbH33m
— Rich Smith (@richsssmith) September 8, 2020

After the bike cops broke the protest line, police deployed blast balls and pepper spray presumably to split the crowd and make arrests. When SPD corralled the group back onto 4th Ave S., they issued a dispersal order over loudspeakers and pushed protesters north up the road.

Backed by a line of police cars and an armored vehicle, cops fired rubber bullets into the crowd, launched blast balls, repeatedly bull-rushed protesters, and arrested people as they continued moving out of the industrial neighborhood.

As protesters retreated, some threw rocks, water bottles, fireworks, and the occasional road cone. SPD ended up pushing the crowd into the ID and then down Rainier Ave into a green space near Judkins Park, where cops and protesters dispersed.

Police said they arrested 22 for "arson, assault, obstructing and failure to disperse." They also posted a photo of a box containing three beer bottles filled with fluid and stuffed with white fabric, which they claim was "Left Behind by a Protester." In body camera footage miraculously released a few hours after the event, an object thrown from the crowd can be seen exploding in the middle of the street and starting a small fire. On a stream clip conservative commenters shared widely, one protester can be seen body-checking a police officer who appeared to have her arms wrapped around the head of another protester.

The Labor Day March, which Every Night Direct Demonstrators and others had been advertising on social media the week before, started outside the International District/Chinatown Station earlier in the evening.

At a little table protesters distributed water bottles, #Defund the police pins, stickers critical of KOMO news, ear plugs, hand sanitizer, and sunscreen, as it was pretty warm outside.

A flautist who attends a lot of these protests said the group gathered in support of the Black Lives Matter movement and to protest SPOG. The flute player mentioned Trump's broad support among the country's major police unions and said, "There's a notion that police unions are politically neutral, but they're not."

Williams later said the group protested to demand "total transparency" when SPOG negotiates its next collective bargaining agreement with the city.

Marchers carried signs that read "SPOG is the prob" and "Bezos is a looter.” Along the route, one person wearing black bloc draped a banner over an overpass that read, "All My Heroes Kill Cops." A few in the crowd clapped.

As protesters made their way down to Sodo, an apartment-dweller in the ID, a Taco Bell employee working the drive-thru, a truck-driver, and a few people in cars held up a fist in solidarity with the protests.

Protesters last marched to SPOG HQ in mid-August. According to the Seattle Times, cops arrested 18 during that protest after some threw firecrackers at the cops, causing injury. The Seattle Emerald reported on a widely shared video that appeared to show bike cops "chasing down, beating, and arresting a small group of three people" in the ID that evening, though it was "unclear if the officers believed the individuals were protestors who had moved from SoDo to the area shown in the video." Later in the month, SPOG released a video showing security footage of two people tossing flaming objects at their building.